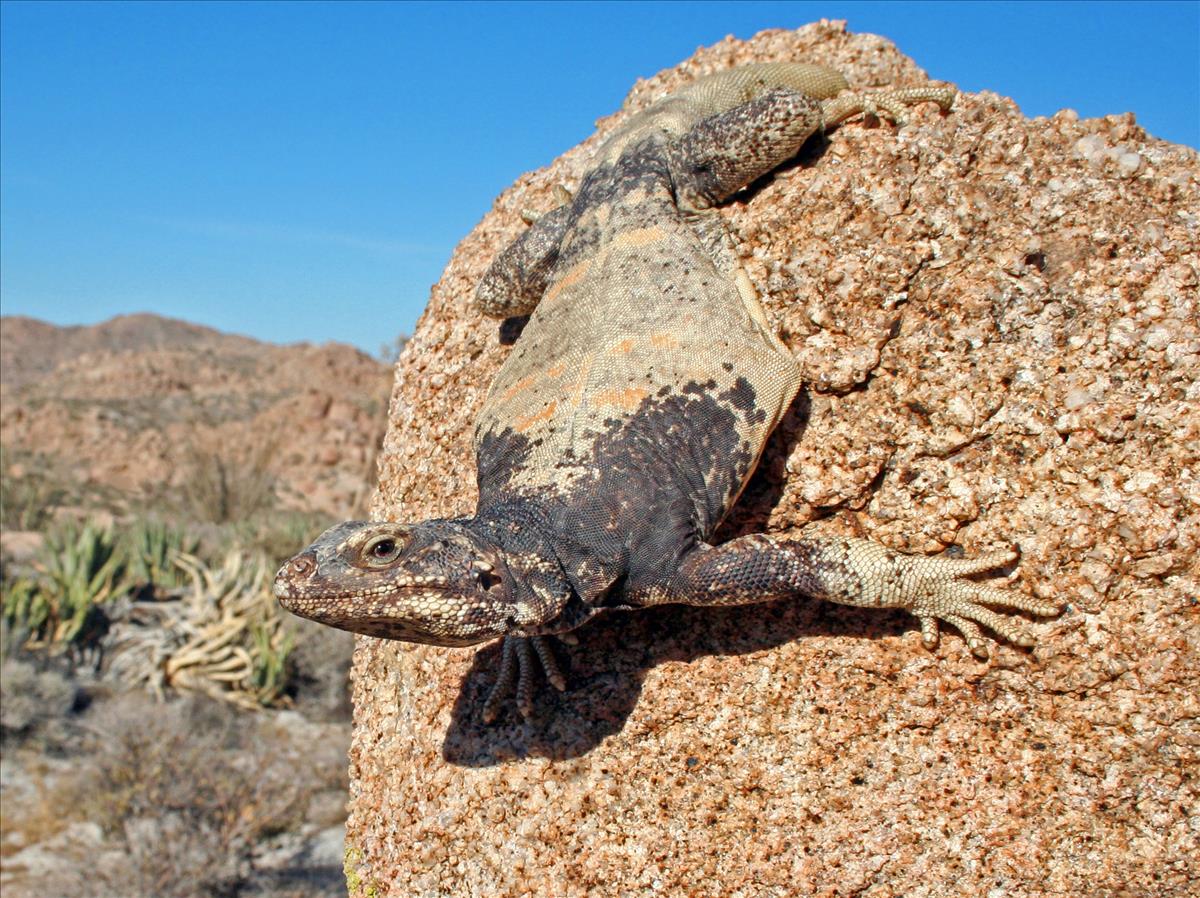 The San Esteban Island chuckwalla is the largest of its kind. The head is relatively small compared to the rest of the body and has irregular, black colouring on the snout and around the eyes. This gives way to splotches of tan or straw, along with black, throughout the rest of the body. Fine scales give the impression of fine sand paper and the skin is loose, particularly around the neck and shoulders where it hangs in folds.

The eyes lie back from the snout and to the side of the head; ear openings are directly behind these. They have no external structure, just a flap of scale to protect the eardrum. The torso is flattened on top, and the sides roll gently outwards, giving an impression of a thick pancake. The legs are short and stout ending in five, long, thin, well defined fingers and toes; the digits on the hind limbs are significantly larger than the front. These end with claws that are talon-like; the outside one in each case is turned outward and to the back. The tail is long and stout with a blunt tip. Its whole surface is fissured and the scales are prominent giving it a rough, coarse, segmented appearance. Males tend to be larger than females, whose colouring is slightly duller and less splattered in effect. Except for size, the young are identical to their parents.

These lizards live on the islands of San Esteban, Pelicanos and Roca Lobos in the Sea of Cortes.

Note: It is not entirely clear how chuckwallas arrived on these islands. Some think that the aboriginal Seri People brought them from the mainland to augment their food sources.

These omnivores prefer creosote and prickly pear blossoms as well as kittlebush leaves but will consume many types of leaves, fruits, buds and seeds. Occasionally, they will take small invertebrates.

These chuckwallas increase activity when temperatures begin to rise early in the year. Sexual activity peaks in mid-spring. With courting, their colouring begins to intensify and the males seek the attention of the females and threaten rivals by head bobbing, mouth gaping and push ups. The dominant male clearly exerts his influence over his territory and he and other males tolerate each other on the basis of size and hierarchy. Females intrude into these areas seeking desirable males. After mating, some 5-16 eggs are laid in an underground cavity. Incubation takes approx. 90 days. Hatchlings emerge in late September and no maternal care is discernible. Male chuckwallas exhibit sexual interest annually. Depending upon the sufficiency of nutritious food and a build up of body reserves for egg formation, females conceive every two to three years.

Chuckwallas need to maintain a high level of body heat in order to remain active. After the coolness of the desert night, they will seek basking rocks or warm sand by which to raise their body temperature. During this time these chuckwallas cannot move with agility and are vulnerable. Their eyes, placed back on the head and facing outwards gives them good peripheral vision, a defense against attack.

Basking usually occupies their mornings. With a rise in body warmth, chuckwallas begin to move about in search of food and females. The rest of the day is spent in moving between shade and sun in order to achieve appropriate thermoregulation (ectothermism). When heat becomes extreme, they seek out cool shade-rocks or crevices. These rocky nooks and crannies are also places where they can seek protection from predation either day or night.

When threatened, they will further protect themselves by inhaling to increase their body size so that they cannot be removed short of puncturing the lungs. Their tail and claws also aid in this wedging activity. The claws are also effective assets when clambering over boulders or clinging to cliff faces. Chuckwallas can access food from the fat stored in their tails when no other nourishment is available; as well, they have the ability to sacrifice this appendage to a predator by allowing them to break off at a special point in the spine. Only a portion of the tail is lost and the animal survives. The replacement is not as long or of the same colour as the original.

If temperatures rise well above 38-40 °C and food sources become parched, these lizards will go into aestivation, just as in the coolness of winter they will hibernate. However, when the seasons are mild, they remain active all year round. Nests are buried to give eggs protection from extreme heat and predation.

Chuckwallas gain all of their water requirements from the plants they eat. They do not drink; waste is eliminated as salty crystals.

The importance of territoriality increases when food is abundant. During times of plenty, the dominant male will carefully supervise his property, allowing other males to be active in his area. Males mark their territory with scent from femoral pores on their hind legs. Females, seeking out a mate that will give her the most robust off-spring, intrude on a male¡¯s territory and are tolerated. When food is scant, territory does not seem as important.

In addition, the San Esteban Island chuckwalla, as an island dweller, exhibits the phenomenon known as ¡°island gigantism¡±. By moving from the mainland to an island habitat, these lizards, and other creatures as well, have to adapt to a new environment and over time have changed their colour to suit the camouflage requirements of their new home. Fewer predators and an increase in the availability of food have, over time, allowed them to increase greatly in size.

A number of different factors lie behind the endangerment of the San Esteban chuckwalla. Many were captured for the ever escalating U.S. pet trade. In addition many are being killed by uninformed people who confuse them with the poisonous Gila monster. However, the most devastating threat lies with the introduction of invasive species and the resulting degradation of desert habitat. Originally, herbivorous and predatory mammals were absent from San Esteban. Both by accident and willfully, feral cats now roam this island, along with livestock, pigs, rats, and rabbits. The result is the hunting of chuckwallas directly by the felines and rodents, and indirectly by the destruction of their habitat through the uprooting, grazing, trampling and consumption of food sources by the invasive animals. Introduced plants, as well, are out competing native creosote, prickly pear and kittlebush shrubs, staples of this lizards diet. Considering that chuckwallas are recent arrivals on San Esteban, they have had insufficient time to adapt. To add to the dilemma, chuckwallas reproduce slowly and have not developed immunity to diseases introduced by invasive species. In addition, they are sought after by birds of prey, coyotes, and rattlesnakes.