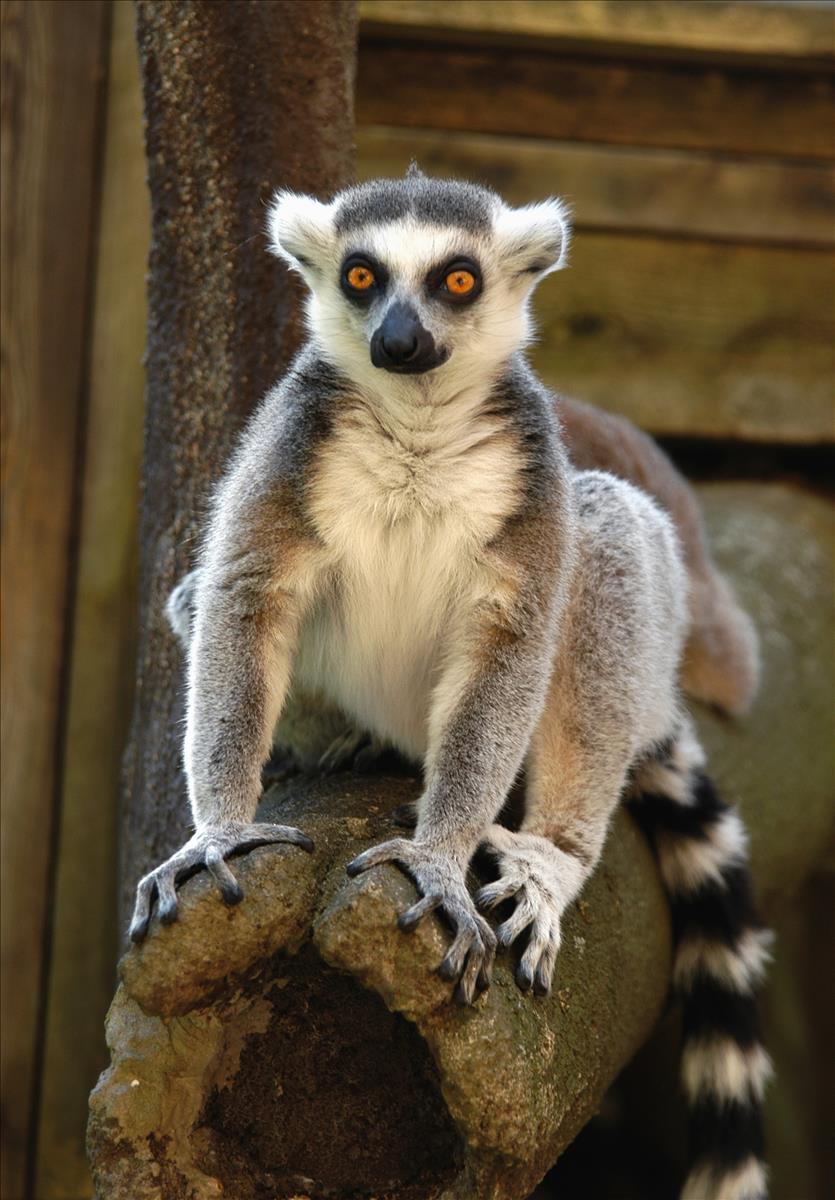 The most noticeable characteristic of this lemur is its long tail. The tail is longer than the body. The species gets its common name from the ringed pattern of the fur on the tail, which has alternating bands of black and white rings. The rest of their bodies are light reddish gray to dark red-brown with light gray to dark brown rumps and light gray to gray-brown limbs. They have white undersides, hands, and feet. They have white faces with dark brown or black triangular eye patches that look like a mask around their light brown eyes, and they have black muzzles. Their ears are white and angular, similar to a cat's.

The only place where members of the Lemuroidae Superfamily, including ring-tailed lemurs, can be found in the wild is Madagascar. Situated to the southeast of Africa and separated from the continent by the 800 km-wide Mozambique Channel, the island of Madagascar is in the Indian Ocean and is the fourth largest island in the world. Ring-tailed lemurs are restricted to the south and southwestern portion of the island.

They prefer gallery forests (forests along riverbanks) and euphorbia bush habitat, but they also live in many other types of forests including rainforests, sub alpine, deciduous, and spiny bush forests. They range further into highland areas than other lemurs and are found at altitudes up to 2600 m. In these areas, sub alpine forests, exposed rock, and savanna dominate the landscape.

Ring-tailed lemurs are primarily herbivorous. They feed from many different species of plants and trees, but are partial to kily trees. They feed on a variety of fruits, as well as leaves, flowers, grasses, bark, and tree sap. They occasionally eat insects and other small animals, as well as bird eggs.

These animals breed polygynously. As the breeding season approaches, the females become polyestrous and the males become sexually active. Females are sexually receptive for one to two days each year, and estrus may be as short as 6 to 24 hours. They exhibit ovarian synchronicity so that all of the adult females in a forest are in estrus at roughly the same time.

The breeding season lasts between 7-21 days in May and both males and females have multiple mates. During these few weeks, males approach females to inspect their genitals and attempt mating. Females that are not receptive will act aggressively toward the males, cuffing or chasing them away. High-ranking males are able to maintain proximity to females during the breeding period and approach, sit near, and rest or sleep in contact with females throughout the day. Estrous females actively approach males for mating by orienting their backsides to a male, lifting their tail, and looking over their shoulder at him. The order of mating reflects the male dominance hierarchy. The highest-ranking, central male is the first male to successfully approach and mate when a female becomes receptive. He is followed by the second-ranking male and then by transfer males or non-troop males. Females reject the mating attempts of related males and sometimes seek out males from other troops, though other males attempt to disrupt these extra-group copulations. Aggressive encounters between males increases greatly before and during the breeding season as they fight for access to receptive females. Although they live in multi-male, multi-female troops, there is typically one central male who interacts more with females than do the other males. During the rest of the year the reproductive organs of both sexes remain quiescent. Males are capable of breeding by about 2.5 years of age, but may not be allowed to do so by older males in the group. Females usually have their first offspring at the age of three years and continue to produce offspring annually.

After a gestation period of 135 to 145 days usually a single young is born, however twins do occur. The baby is about 10 cm. long and weighs about 78 g. The fur is brownish, but otherwise the baby has adult colouring including the striped tail. The young cling ventrally to their mother’s chest. The babies are fairly precocious, beginning to reach for branches in the second week, at which time they cling to their mother’s back. By the age of one month they begin to explore their surroundings independently. Because of the timing of births, there are many playmates within the group for infant ring-tailed lemurs. Social play with peers begins around week six and includes such behaviors as chasing, play biting, jumping on, and wrestling with one or more partners. Young lemurs begin to eat solid food after two months and are fully weaned after five months. They reach full adult size at 1 to 1.5 years. Sexual maturity is reached between 2.5 and 3 years. Male involvement in infant rearing is limited, although the entire troop, regardless of age or sex, can be seen caring for the young. Young females remain with their natal troop while males emigrate to a new troop between three and five years of age.

Ring-tailed lemurs are sociable animals assembling in troops of up to 24 members. Troops vary in size and are classified as multi-male groups, with a matriline as the core group. In this matriarchal society, females are dominant over males at all times. Border disputes with rival troops occur occasionally and it is the dominant female's responsibility to defend the troop's home range. Dominance is enforced by lunging, chasing, cuffing, grabbing, and biting. Both sexes have separate dominance hierarchies. Females compete among themselves for space and resources, and males fight for reproductive access to females.

Alloparenting is a behavioural adaptation. In addition to licking and grooming new infants, members of the social group provide varying degrees of infant care for the mother. Mothers permit alloparenting by group members, both they and their infants benefit; mothers are allowed time to rest and can forage and travel more efficiently if another ring-tailed lemur is carrying their infant while infants gain valuable social skills, and receive additional protection from predators. The alloparents also benefit: adult males gain social access to adult females, potentially securing their position as a mate in the future. Females gain valuable experience in infant handling and other parental skills.
Ring-tailed lemurs are more terrestrial than all other lemurs. While walking on the ground they hold their tails aloft in an S-shape curve allowing for easy location of others within the troop. This is both a visual and olfactory form of communication.

As in other diurnal primates, communication is complex. Visual communication signals, such as body postures and facial expressions are used, in addition to vocal communication. They have 28 distinct call types, 22 of which are used by adults, six of which are particular to infants. They include moans, meows, wails, howls, purrs, yips, chutters, squeals, and chirps. These are used for various different circumstances. They have specialized antipredator vocalizations that elicit responses from the rest of the group when they are given. For example, "gulps" are heard when a carnivore, raptor, or rapidly moving human are perceived and are generalized group alert vocalizations. "Shrieks" are heard in response to large, low-flying birds, "clicks" are heard in situations of curiosity but wariness, and "yaps" are heard during mobbing of mammalian predators.

Olfactory communication is also used for various purposes. By using their scent glands to transfer odour to their tails the group can locate and identify each other as they move about with tails raised. These lemurs can differentiate between the scents of individual animals. Using their anogenital scent glands both sexes mark various surfaces within their home range, especially in areas that overlap with other groups’ home range. Males also leave visual and scent markings using the glands on their inner forearms. This is called "spur marking". They use the thorny nail, which overlays the scent gland, to cut into wood surfaces and spread their secretions. They do this more frequently during mating and migration seasons.

They have a reflective layer (known as a tapetum) in the back of their eyes similar to that of cats. This allows them to have very good vision at night.
Ring-tailed lemurs share unique dental characteristics with other members of the Superfamily Lemuroidea; they have specialized teeth in their lower jaw that form a dental comb. These long, narrow teeth project nearly straight forward from the jaw and this specialized dentition is thought to aid in grooming.

They like to sunbathe during the early morning hours. They can be seen sitting upright on the ground, arms held out from the sides and resting on their knees, palms open exposing their stomachs to the sun (much like a human in a yoga meditation position). This allows them to warm their bodies in the cool mornings. Afterwards the troop goes foraging for food until noon. In the afternoon, during the hottest part of the day, they then nap in trees or on the ground. Later in the afternoon they forage again before nightfall and then go to sleep in the trees.

Much of their habitat has been altered by human impact. These lemurs strongly favour gallery forests, but such forests have now been cleared from much of Madagascar in order to create pasture for livestock. Another threat to the species is harvesting either for food (bush meat) or pets. Periodic drought, common to southern Madagascar, can impact populations already in decline. Natural predators include birds of prey, snakes, feral cats and dogs, and the fossa. The fossa (Cryptoprocta ferox) is a cat-like, carnivorous mammal that is endemic to Madagascar.