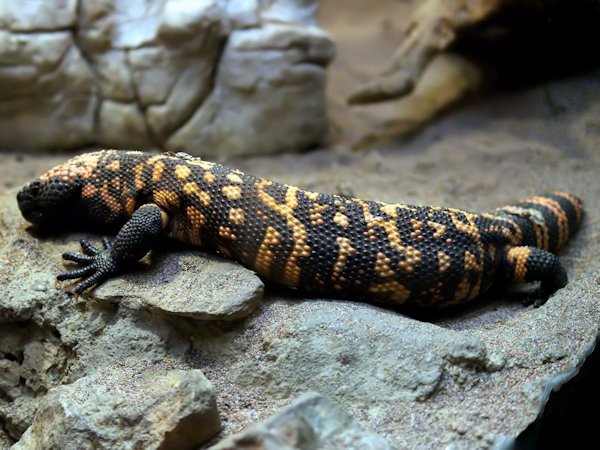 This reptile has a stout, triangular-shaped head flattened on top. The neck is short and thick, the torso long, fat and cylindrical, ending in a blunt sausage-shaped tail. The legs are short and thick. When open, the large mouth reveals a forked, purple-black tongue as well as forty to forty-five short, sharp teeth, slanting slightly backward and inward. The lower teeth display a groove front and back which are connected to venom-filled saliva glands embedded in the lower jaws.

The dorsum or back on top of the body is covered by bony, bead-like scales. The belly, however, is smooth and barely ossified. The snout and areas around the mouth are black, breaking into complex patterns or reticulations of orange, pink and black over the top of the head and neck and down the upper body. The tail is banded orange-pink separated by bands of black. The lower portions of the legs and feet are also black.

Externally, the sexes are closely alike. Examination, however, reveals the male’s head to be slightly larger than the female’s. She also has a slightly broader torso. Otherwise they are similar in appearance.

Southern U.S.A. and Mexico. The reticulated gila monster lives in the desert regions of Sonora and Chihuahua in the American south-west as well as Arizona, south-east California, southern Nevada, south-west Utah, south-west New Mexico and the Sonora and Sinaloa regions of north-west Mexico.

Desert washes, boulders and rough, rocky country. This lizard inhabits rocky foothills in scrubland and oak woodlands where deserts are semi-arid and winters are mild and summers hot. It shelters in abandoned burrows and when on the surface, thickets and rocky crevices all within reach of water.

Primarily bird and reptile eggs; occasionally bird chicks and small mammals such as mice, rabbits, frogs and other lizards, insects, and carrion.

After wintering over in burrows, gila monsters emerge when temperatures warm in early March. Males at this time become aggressive and territorial with displays of head bobbing, and push-ups to display strength and dominance. Where this is insufficient to ward off perceived intruders, wrestling matches will break out with combatants grasping each other with their limbs and claws, biting each other, sometimes severely, rolling over and over. These events can last for a few minutes or for a prolonged period. Gilas are immune to their own venom and such episodes are rarely fatal. These displays of perseverance and strength are helpful for discerning females in choosing the best mate with whom to produce healthy, viable offspring. May and June is a period when gila monsters are most active on the surface during the day. They are almost completely diurnal.

Courtship is initiated in early May when males confront females searching out her scent with vigorous tongue flicking. She may reject him by biting and moving away or if receptive, she will lie still while he circles her and caresses her head and shoulders with tongue flicks and leg rubbing. Copulation periods can be brief or extensive, lasting over a few days.

A clutch of two to twelve (the average is five) leathery, oval shaped, white eggs are laid in a shallow depression about 12 cm deep in an unused area of a burrow or any place which is protected from direct sunlight and has dampness or humidity. The eggs are covered and no maternal care has been observed. Incubation lasts from nine to ten months and hatchlings emerge in April through June of the following year. The young are strongly venomous and are quite capable of defending themselves. Sexual maturity is achieved in three or four years.

Gilas spend less and less time on the surface as summer heat intensifies, emerging from burrows only in early morning or late afternoon. By November they have retreated to their burrows completely.

These lizards have adapted well to their hot, semi-arid environment. Their scaly covering allows for the retention of body fluids and their large tail, along with a large torso provide excellent opportunities for storing fat energy when hunting on the surface is not feasible. The reticulated patterning on the scales is excellent camouflage for a leaf-shaded, sun dappled environment. As much of the year is spent underground and prey is either stationary or slow moving, keen eyesight has not developed.

However, gilas do have a powerful sense of smell and hearing. They can detect buried eggs by smell alone and their hearing allows them to detect the faintest ground vibrations. A forked tongue coupled with a Jacobsen’s Organ in the roof of its mouth permits a gila to taste the air. Sharp claws and powerful legs aid in climbing rocky ledges or, occasionally, up large cacti looking for nests. They are used too in scraping out nest depressions and covering over the eggs.

A large mouth and strong jaws, grooved teeth and venomous saliva all combine to incapacitate prey. Eggs are crushed and their contents consumed. Live food is swallowed whole or chunked down. Gilas do not chew except to knead venom into live tissue. Capillary action moves the venom upward. It is not injected. These lizards can twist and bite with lightning speed when molested. Their bite can be very painful.

Gila monsters have adapted as well by becoming ground dwellers and burrow occupiers. They spend nearly all of their time underground in pre-owned dens or occasionally one of their own making, thereby avoiding the extremes of a desert climate at the same time benefiting from small amounts of dampness and humidity found underground. These lizards do not hibernate and occasionally can be seen warming up at or near the den mouth on mild winter days. When surface activity is necessary during the heat of summer it is confined to mornings and evenings, and occasionally at night.

Gila monsters can swim but they rarely do so. They are seen occasionally lying in rain puddles after rare desert precipitation. Exothermism and their slow movement reduce the need for eating regularly and hunting frequently. When gilas do eat, they consume a lot and can consume up to one-third of their body weight. Resting metabolism rate is very low. This, coupled with long periods of inactivity, combine to make them well suited for desert survival.

Urban and agricultural sprawl into desert habitat and its degradation by grazing domestic cattle and goats are a significant concern. Free roaming cats and dogs take significant numbers of these lizards. Although capturing the gila monster for the pet trade is illegal, much of it continues. Humans kill many gilas out of ignorance and fear. They are also prey to owls, kites, foxes, coyotes, and rattlesnakes.