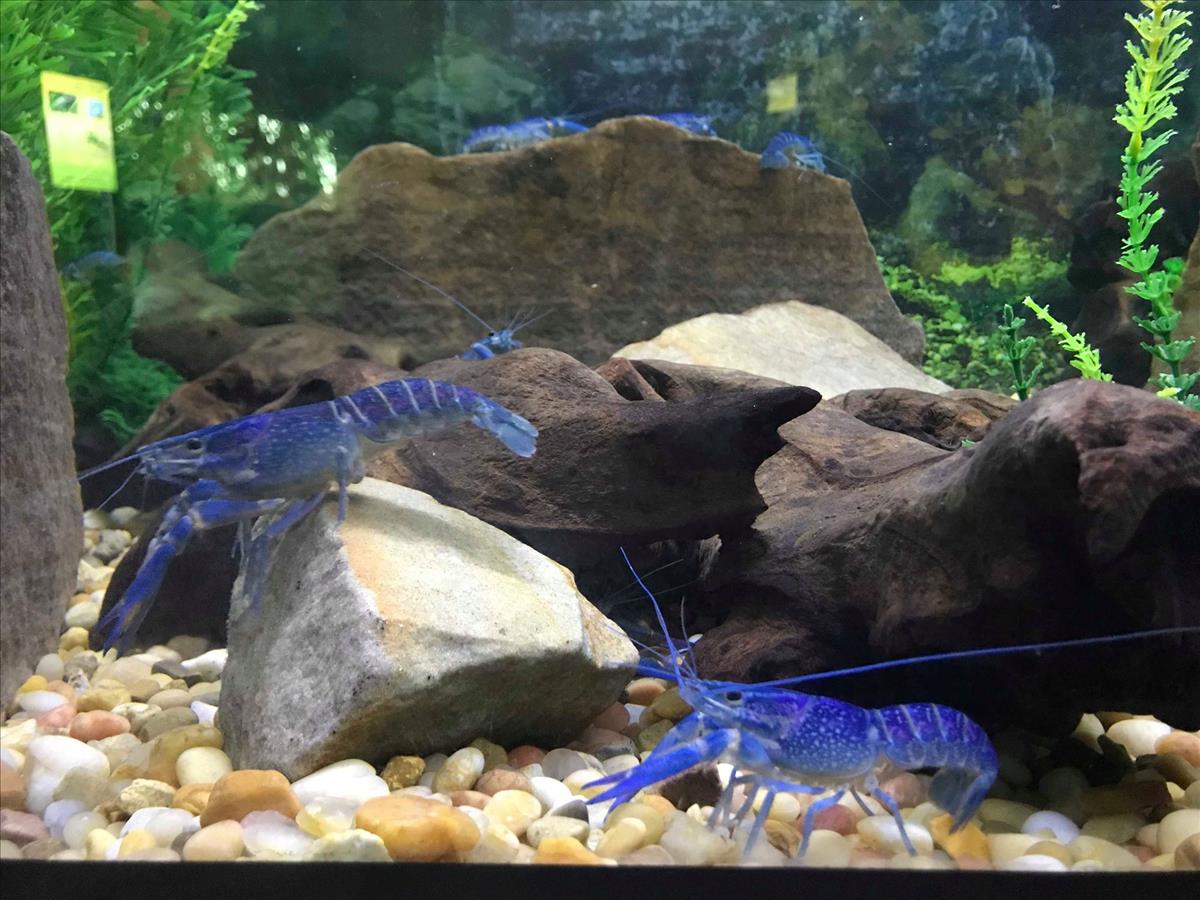 These are the largest of the freshwater crayfish, with males reaching lengths of 20 - 25 cm and females up to 18 cm. They can weigh up to 300 g. They are blue to blue/green in colour, the blue being more intense when the water is clean. They become more of a green/brown colour in brackish water. Also known as Queensland red claws or blue crayfish, these yabbies have four long ridges (carinae) on the surface of their heads (cephalon). This explains the origin of their species name quadricarinatus. Adult males have a red patch on the outside of their claws; females do not have that patch, but their claws get bluer with age.

This species is native to New South Wales, Australia, but is now commonly found in the waters of Northern Queensland and the Northern Territory in Australia and in south eastern Papua New Guinea. As well, they have been introduced into many other areas around the world where they are now an invasive species such as South Africa, Mexico, Jamaica, and Puerto Rico.

Yabbies are non-burrowing bottom dwellers. They can tolerate a large variety of freshwater habitats such as creeks and other bodies of warm water but they prefer slow moving water such as in lakes or lagoons. They are found in tropical and sub-tropical climates and need water to be warmer than 10 °C. They dig under rocks, enlarge existing holes and use caves or plants as shelter. They are climbers as well.

Yabbies are omnivores and scavengers. As opportunistic eaters, they will eat whatever they find - frogs, snails, fish, and plants, even others of their own species. Their diet can affect their colour.

Red claw yabbies in the wild breed between September and April, although in captivity they can breed throughout the year. Light, temperature and water quality seem to be the keys to breeding periods. After a courting process, the male deposits a package of sperm on the belly of the female, just around her first set of legs. The female releases her eggs within the next 24 hours and drags them through this sperm to fertilize them. She will them carry this clutch of eggs, called a berrie, for six to ten weeks until the young hatch. She carries them beneath her tail. She may have between 300 and 800 olive green eggs in a brood. The female will care for them, cleaning and aerating them as well as getting rid of any that are not good. There is no larval stage; the young are fully formed when hatched.

After hatching, the young remain attached to their mother for some time but gradually become more aggressive and begin to forage on their own. Females with eggs or young, and the young themselves are not cannibalistic, but the mothers are more aggressive to other yabbies, perhaps as a form of protection for the young. The young go through a rapid growth, moulting three to four times a year as juveniles. Two or three days before the moult, the yabby will seek shelter and stop eating. After the moult the animal is vulnerable and could even be preyed upon by another yabby. Maturity is reached in about seven months, and the adults moult less frequently. The exoskeletons are eaten, supplying the animals with valuable calcium. Yabbies have a life span of four to five years on average.

Females are territorial when they have eggs and there can be fighting. If limbs are lost, they can be regenerated within a month or so. Yabbies are mainly active at night.

There are no major threats to this species or its habitat. Yabbies tolerate a wide variety of habitats and in some places are considered an invasive species. They can perhaps be a threat where introduced to local fauna and flora.