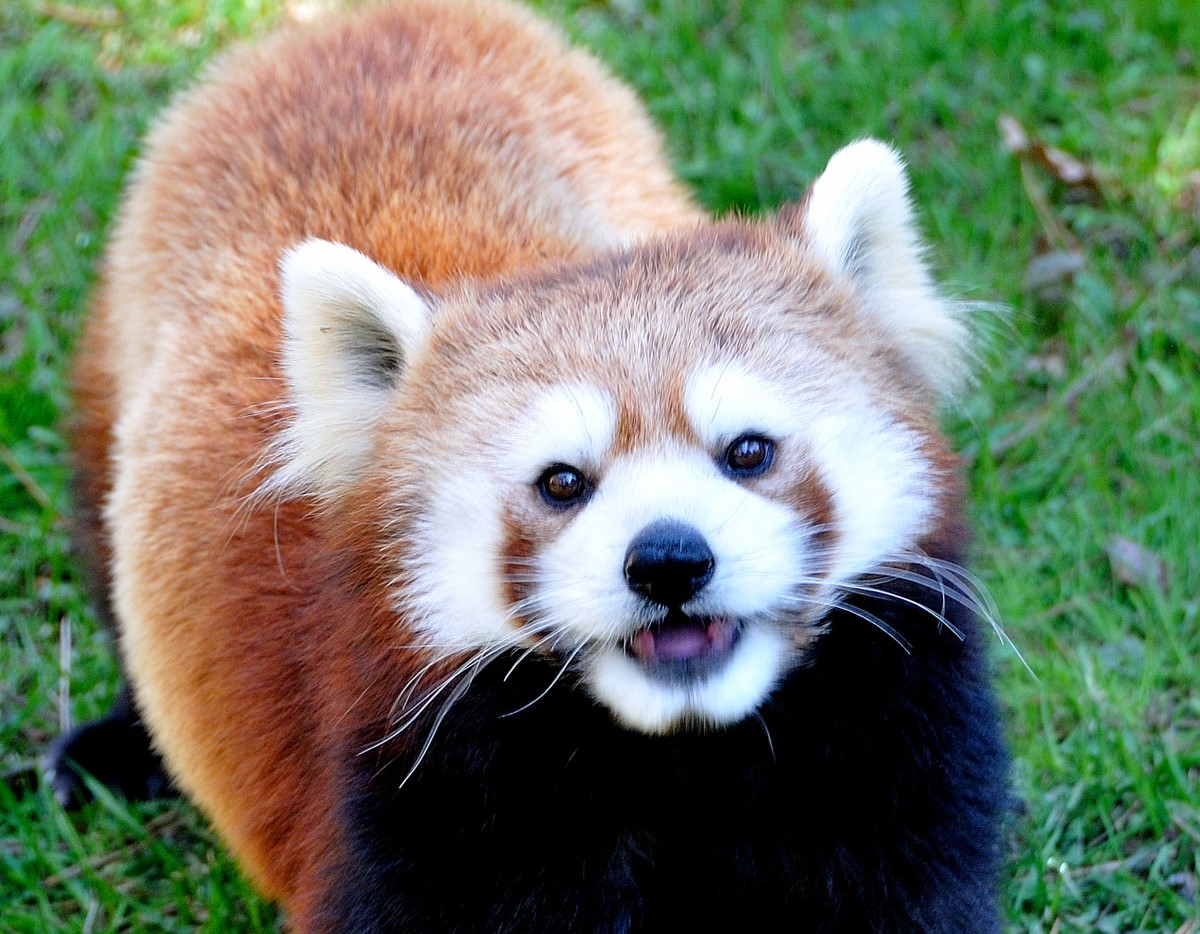 The red panda is covered with rusty red fur that is long and coarse, with an undercoat that is soft, dense, and woolly. The back of the ears, the limbs and the underparts are dark reddish brown to black. The bushy tail is inconspicuously ringed. Similar in appearance to a raccoon, the red panda has a short, white muzzle with long white whiskers, dark circles or patches around its eyes, and erect pointed ears with white edges. The feet have hairy soles and the claws are semi-retractable. The red panda's front legs are angled inward, which causes it to waddle when it walks. Like the giant panda, they have an extra pseudo-thumb on each forepaw.

Nepal, India, Bhutan, northern Myanmar, and the provinces of Yunnan and Sichuan in south central China.

Temperate mountain forests and bamboo thickets at elevations of 1,800 - 4,000m.

Red pandas breed once a year in early winter. The females come into heat in January or February, and it lasts one to three days. Adult red pandas rarely interact with each other outside of the mating season. During the mating season, scent-markings increase, and the female invites the male to mount her on the ground. Males leave their scent by urinating or rubbing their anogenital area on trees. Both males and females may mate with more than one partner in a season.

Red pandas will groom each other a lot during their courtship, but after they have mated, the male doesn't have anything else to do with the female or the young. After a gestation period of 90 to 145 days, the female gives birth to a litter of one to four, usually one or two young. Several days before parturition, the female begins to carry nest materials (sticks, grass, leaves) to a suitable nest site. A nest may be a hollow tree or a rock crevice lined with grass, branches, and leaves. The young are born in the spring and summer, with most newborns arriving in June.

Cubs are helpless and blind, but fully covered with hair. They are a solid buff color until they are about three months old and obtain the distinctive red panda markings. They are blind for 21 to 30 days, remaining dependent upon the mother for some time. To produce enough milk for the cubs, the mother has to eat three times the normal quantity of bamboo. The babies will drink only milk until they are about five months old, when they are then weaned onto bamboo leaves. Cubs obtain their adult size at about 12 months of age and leave their parents at this time, before the next litter is due. Red pandas reach sexual maturity at 18 months. The life span of a red panda is about 10 to 12 years in captivity and only about seven years in the wild.

They are solitary animals; however, they commonly travel in pairs or in small family groups. They are territorial; males having a much larger range than females and spend much of their time patrolling the limits of their territory. Females tend to stay within the central part of their territory. Both male and female red pandas mark their territory with a pungent, oily fluid and also with a clear fluid that is released from the pores on the base of their feet. They actually detect these scents through taste rather than smell, since their climate is cold and wet.

The colouring of the red panda enables it to blend in with reddish moss and white lichen in fir trees. They spend much of their time in trees and are excellent climbers. The tail is used for balance when the red panda is in a tree, and while on the ground the panda carries it straight and horizontally. It is also used as a pillow. The presence of an extra thumb on each forepaw helps them grasp bamboo. They communicate by a series of snorts, huffs, barks, bleats, short whistles, or squeaking noises. When frightened or angry, red pandas stand on their hind legs and produce a series of snorts or sharp spitting hisses just like a housecat. The red panda's facial stripes and other markings vary widely and give each red panda its own distinctive look.

Activity levels of this species changes throughout the year based on the temperature, feeding regimes, and the presence of young. They are most active at dusk, dawn, and during the night. They are nocturnal and crepuscular, as well as arboreal, sleeping by day in nests in evergreens. When sleeping, it generally curls up like a cat or dog, with the tail over the head, but it may also sleep while sitting on top of a limb, with the head tucked under the chest and between the forelegs. Movement on the ground is done by a slow, cross-extension gait, and faster bounding or trotting. Red pandas are very agile and can jump 1.5 m from branch to branch. They descend trees headfirst and display their flexibility as they move between branches.

They engage in several leisure behaviors after awakening or eating. Shortly after waking, red pandas clean their fur like a cat, licking their front paws and then rubbing their back, stomach and sides. They also rub their back and belly along the sides of trees or rocks. Then they patrol their territory, marking it with urine and a weak musk-smelling secretion from their anal gland. They then search for food running along the ground or through the trees. Front paws are used to place food into the mouth, while drinking is performed by plunging a paw into water and then licking the paw.

Deforestation destroys the red panda’s nesting sites and the bamboo that provides their food. Sometimes the red panda is shot for game and it is often found in the traps set for musk deer. The expanding human population in Southeast Asia, increasing need for land and lumber, competition with local livestock for food, and pollution all contribute to the dangers for the red panda from human sources.