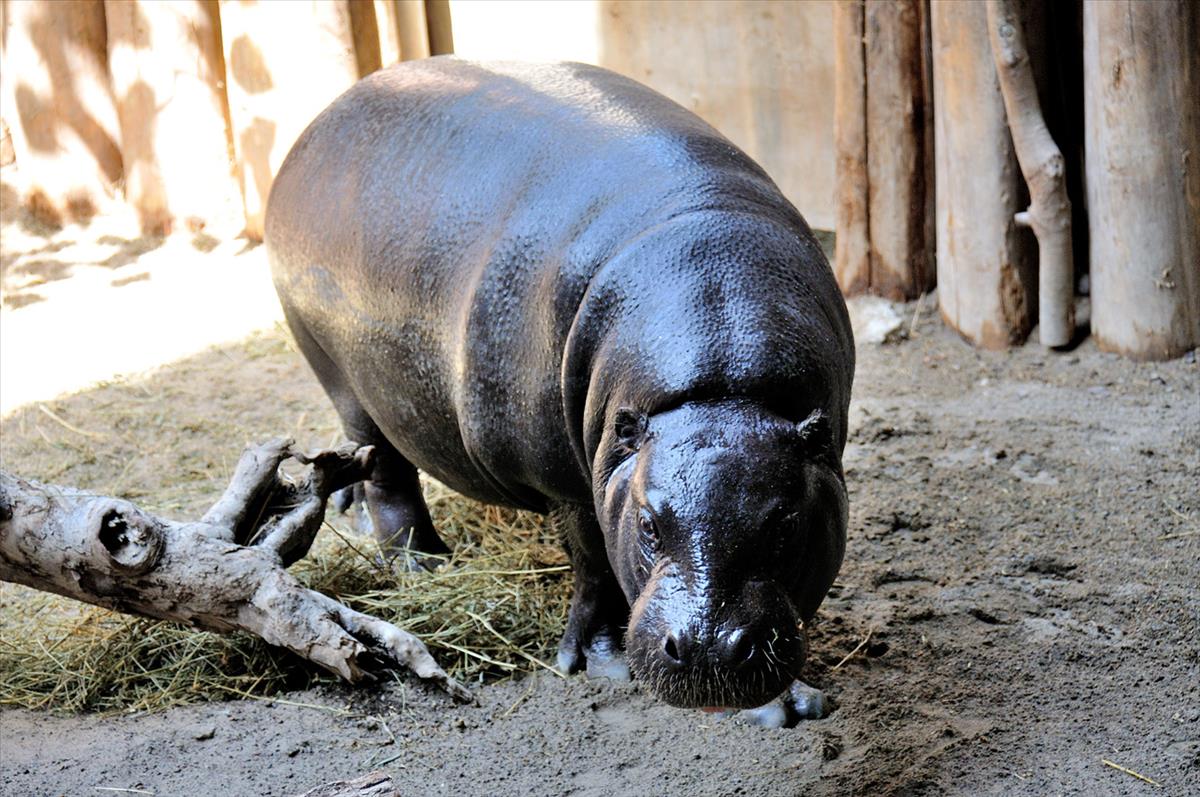 The pygmy hippo may resemble a miniature river hippopotamus, but there are structural differences. It is considerably smaller; the head is rounder, proportionately smaller and not so broad and flat. The nostrils are large and almost circular, the eyes are set on the side of the head and do not protrude, the legs are proportionately longer and only the front toes are webbed. As well, the pygmy hippo has only one pair of upper incisors compared to the river hippo’s two pairs. The feet have four toes each with sharp nails. Length of head & body: 1.5 m – 1.8 m, Height to shoulder: 0.8 m, Weight: 160 - 270 kg.

West Africa, with Liberia having the majority of the population. Small numbers are also found in the neighboring countries of Sierra Leone, Guinea and the Ivory Coast.

Rainforests, swamps, and thickets that are near water and streams.

Pygmy hippos are herbivores and feed on various vegetation, including succulents, tender shoots, leaves, roots, grasses, and fallen fruit. Pygmy hippos also feed on aquatic plants. They usually begin feeding in the afternoon, and continue until midnight. Hippos have multi-chambered stomachs that function like that of ruminants, however they do not chew cud. They are classified as pseudo ruminants.

Mating takes place on land and in the water. The gestation period is about 180 - 210 days, after which a single calf is born. The pink newborn weighs between 4.5 and 6.5 kg. The young are usually born on land. After birth, the young are hidden by their mother for a few weeks to protect them from predators and the sun. The calf grows quickly, gaining from 300 - 600 g daily. It doubles its birth weight in three weeks. After 5 months, it weighs ten times its birth weight. It nurses first on land, later underwater. The calf is weaned after 6-8 months and stays with its mother for up to 3 years. Pygmy hippos reach sexual maturity at 4-5 years of age. The life span is approximately 30 - 50 years.

The pygmy hippo is less aquatic than the river hippo, spending most of its time on land. They are very shy and are nocturnal in nature. Pygmy hippos sleep by day, resting most of the morning and early afternoon in thick undergrowth near rivers or streams until they begin to forage during late evening to about midnight. When foraging in tropical forests, pygmy hippos make deep paths similar to tunnels within the dense brush. When foraging in water, they form canal like pathways. It marks these tunnel-like paths by spreading its dung while vigorously wagging its tail when defecating. When frightened, or alarmed, the pygmy hippo seeks refuge in dense cover or in the water. They are excellent swimmers and can even walk on the river bottom. They can stay underwater for over 5 minutes. Pygmy hippos are said to have excellent hearing and eyesight. An oily chemical, which is given off by the body, helps lubricate their skin so it doesn't dry out.

Excessive logging operations combined with the destruction of large areas of its forest habitat, and hunting.