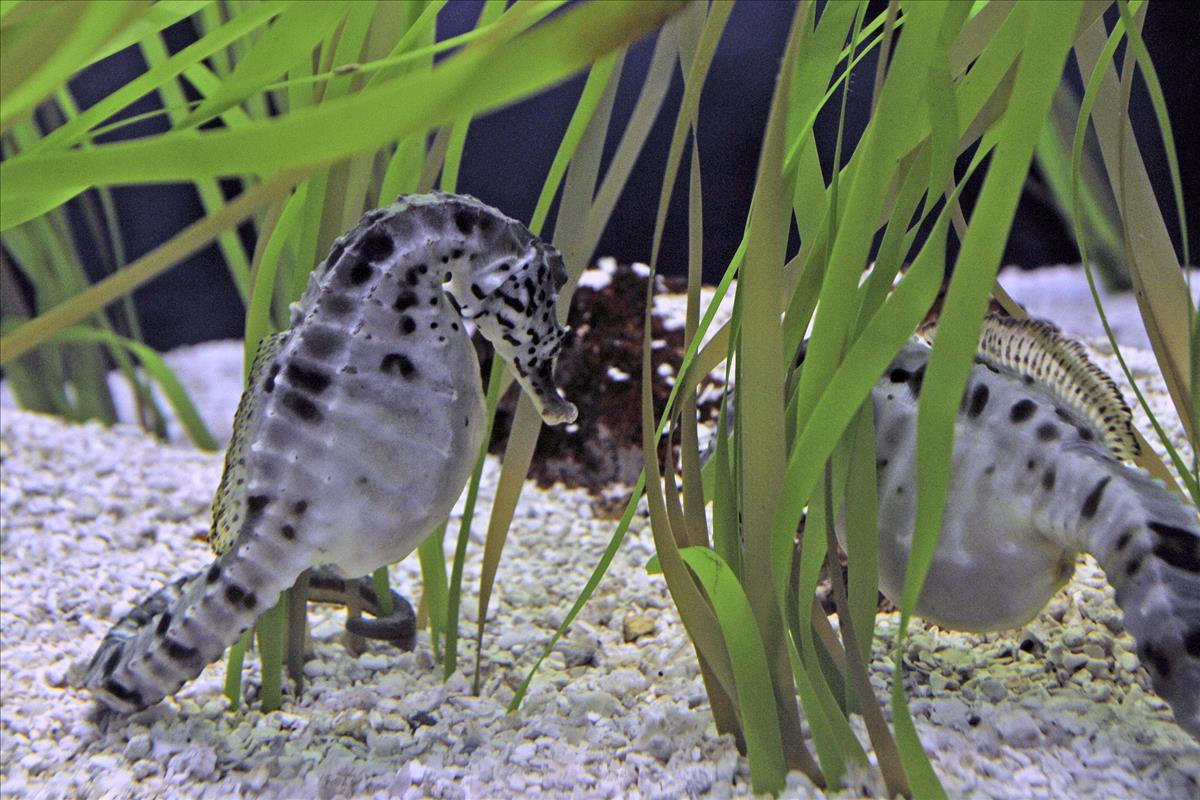 Seahorses are bony fishes (teleosts), complete with gills, fins and a swim-bladder. These seahorses are the largest of their genus. The maximum height has been measured at 35 cm. Their elongated bodies are encased in bony plates that look like rings, and they are covered with skin, not scales as is the case with other fish. They have no pelvic fins, but small pectoral fins and a single dorsal fin. The dorsal fin, on their back, provides propulsion, while the ‘ear-like’ pectoral fins, below the gill opening, are used for stability and steering; the function of the little anal fin is unknown. They swim in an upright position with their tails down and their heads up, held at right angles to their body. They have a tube like mouth/snout with no teeth. They have small gill openings and a prehensile tail.

The seahorse uses its prehensile tail as an anchor, wrapping it around seagrass stems, coral heads or any other suitable object. Males have longer tails and shorter heavier snouts than females. Their eyes can move independently of each other (like chameleons). Colours can vary, ranging from brown, yellow, grey, white or orange, or blends and splotches of these colours on the head and abdomen. Tails are often alternating patterns of light and dark bands. The male has a yellow mark close to the top of the brood pouch, which is usually lighter in colour. Both genders have large, swollen bellies, but only the male will have a brood pouch.

These seahorses are found in the marine waters of the southwest Pacific Ocean around southeastern Australia and all around New Zealand.

They prefer shallow inshore waters such as in harbours or sheltered coastal bays. They are found in algae, seagrass and along rocky reefs in water up to depths of 40 – 50 m. In deep water, they attach themselves to sponges, and in open water they cling to rafts of algae, seagrass or artificial structures such as nets. The maximum depth recorded for this seahorse is 104 m. It is not known if they occupy territories or range freely.

Seahorses have no teeth and no stomach. With their tube-like snout they create a vacuum that draws their prey into their mouth. Prey is swallowed whole and passes rapidly through the digestive system. Adult seahorses will feed on any live animals small enough to fit in their mouth, including small fish fry, crustaceans, such as shrimp, zooplankton, and other invertebrates. A seahorse can consume up to 3,000 brine shrimp each day. Smaller seahorses consume more crustaceans than larger ones. There may be seasonal diet changes.

Seahorse populations commonly have an equal number of male and female adults, but nothing is known about how sex is determined (i.e. genetically or environmentally). Male seahorses play an unusual role in reproduction: it is the male seahorse, rather than the female, that becomes pregnant and gives birth to their offspring. The male becomes pregnant at about one year of age, although his brood pouch will develop on his abdomen when he becomes mature at about six months of age.

Breeding generally occurs in the spring and summer, but could also take place at any time of the year. The female inserts her ovipositor into the male's brood pouch and deposits her eggs. The male then fertilizes them and they become embedded in the wall of the pouch. There is a placental fluid that removes waste and delivers oxygen and nutrients to the eggs. This fluid becomes more and more like the surrounding seawater as the eggs mature. The male incubates the eggs for about 30 days, at which time he goes into labour, usually on a night with a full moon. The eggs hatch out into miniature seahorses that are replicas of the adults and these emerge into the water. They can number over one thousand, although a more typical average would be 200 or so.

The offspring are fully independent and begin to fend for themselves immediately. They live in the open ocean (pelagic), or hang onto rafts of floating debris with their tails for several weeks, growing from 16 - 19 mm up to about 30 mm. When they reach that size, the juveniles sink to the bottom. It appears that larger males produce more young, and that males carry more than one brood in a season. Their life span is unknown, although it is thought to be relatively short compared to other species. Male and female do not appear to form pair bonds. Their rapid growth and early maturation, as well as their ability to raft, allows them to keep stable populations and disperse themselves more widely.

The colours of the seahorse allow them to camouflage themselves very efficiently and make them very difficult to spot in the wild. They can change colour in a matter of minutes to match their surroundings. Camouflage helps seahorses in their role as ambush predators. A seahorse will remain motionless until a small animal, such as a mysid shrimp passes within reach. The seahorse will suddenly flick up its head, and suck the prey out of the water column through its long tubular snout. The entire motion occurs in a split second and can barely be seen by the human eye. Unlike most seahorses, Hippocampus abdominalis is a strong swimmer. They have been reported to have travelled hundreds of metres in a day. Generally they are active at dusk and at night, and at night they have been seen to form large groups.

Hippocampus abdominalis is threatened mainly by habitat loss, and is caught as by-catch from commercial fisheries. They are also harvested for the aquarium trade. There is little information on population sizes, but they are protected by legislation in Australia, although not in New Zealand.