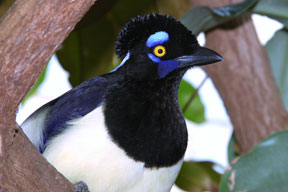 The plush crested jay is a medium to large bird of the crow and jay family. The head, sides and front of the neck are black. The feathers on the forehead are stiff but become soft on the crown providing a short crest. There is a silvery blue area over each yellow eye which becomes white at the upper edge. Under the eyes there is a deep blue area and the same blue is present in a short moustache. The sturdy bill is black and 2.8cm long. There is an area at the back of the neck which is milky blue above and becomes violet blue at the bottom as it blends into the same colour on the back. The broad tail feathers end in a two to five cm wide, white band. The upper wings are a brighter blue; the undersides are brown. The breast and abdomen are creamy white. The black, scaly legs end with three toes forward and one facing backwards. The sexes are similar in size and colour. Size is 35.5cm.

These jays are found in various types of forest including evergreen, deciduous, temperate, and rain forests where they forage at all levels. They also fly into scrubland or groves in agriculture areas such as maize plantations. They are found from lowlands up to 1500m.

They have an omnivorous diet which includes small invertebrates, insects, some fruit, occasionally eggs, frogs, small snakes, nuts, maize, and seeds. Butterflies are also consumed, once the wings have been removed.

Just prior to breeding season (which is October to December in Paraguay and Brazil), the noisy, communal roost affords an opportunity to select a mate. Part of the courtship involves the male feeding the female. If she’s receptive to his gifts she responds with a jiggling of her wings and tail. These pair bonds appear monogamous but they don’t mate for life. The nest is built by both birds and is found four to seven metres up in a tree. The pair firmly wedge twigs into a fork of a tree, then they make a bowl shaped nest with layers of bark and roots. Sometimes they cement the nest together with animal dung. Then they line the bowl with feathers, bits of fur, grass and leaves. A clutch of two to four eggs is laid in Paraguay, and in Brazil two to seven eggs. The colour of the eggs varies from buff to greenish white marked with speckles. The female incubates the eggs for 18-20 days or until they hatch. While incubating the female is fed by her mate. The hatching is asynchronous (not happening at the same time) and it is not uncommon for the youngest and weakest to die in the nest. The hatchlings are born unable to see; they are naked or covered with a light down and are dependent on their parents for food and warmth. They are fed for about three months even though they fledge when they are about 20 days old.

Plush crested jays usually have two to three helpers to build the nest and to feed the hatchlings. This along with both parents feeding the chicks enables more chicks to reach independence. These many, watchful, eyes are also helpful in protecting the young as they have been seen mobbing predators. Helpers are the offspring of the previous year, an apprenticeship for parenthood under the watchful eyes of their parents. The brown eye of the juveniles denotes them as not sexually mature. The plush crested jays distinctive eye rim colour as well as the moustache and back of neck distinctive blue colouring helps to identify individuals of the same species while in the forest, since these jays are often seen roosting and flying with other jay species. Moreover, the distinctive areas would act to break up their outline and act as cryptic colouration. These jays also have wings which are rounded and short; an adaptation enabling them to manoeuvre among the trees in the forest. The creamy, white, belly is an example of countershading so that when flying they appear light against the sky. The perching feet [three forward and one backward facing toe] automatically lock around branches when the birds crouch. These arboreal, diurnal birds can be seen hopping on branches or flying to a food source.
When they venture from the forest to scrubland they fly over the open spaces individually, an adaptation to not drawing attention to themselves. Although they forage at all levels of the forest, they spend the least amount of time in the canopy where the raptors are found. Another adaptation to protecting themselves is that they never eat where they obtain food but transport it at least five metres away. Sometimes these birds even catch insects when flying.
Their bill is especially adapted to crushing seeds and small nuts. Plush crested jays also store food such as nuts, maize, dead animals either on the ground or in tree cracks, between branches or beside epiphytes which provides a food source when needed.
Flocking behaviour is an adaptation for communicating about food sources and to giving young birds an opportunity to learn from the larger group. This species roosts communally which gives protection from predators as not all birds have to watch for predators but when seen the total group could mob and drive away the threat. Plush crested jays have a loud number of calls, 23 vocalizations have been identified all consisting of melodic notes except for the strident begging of the chicks, and the warning of a threat. Their calls also identify where they are in the forest, or where nesting, they even mimic other sounds they hear in the forest. Flocks of these jays have a range of 20-30 Ha and have even expanded into urban areas in Brazil. These birds are so adaptable because they have huge brains and a brain to body ratio only slightly smaller than humans.

Deforestation of their natural habitat whether for timber extraction or for agriculture is a problem.