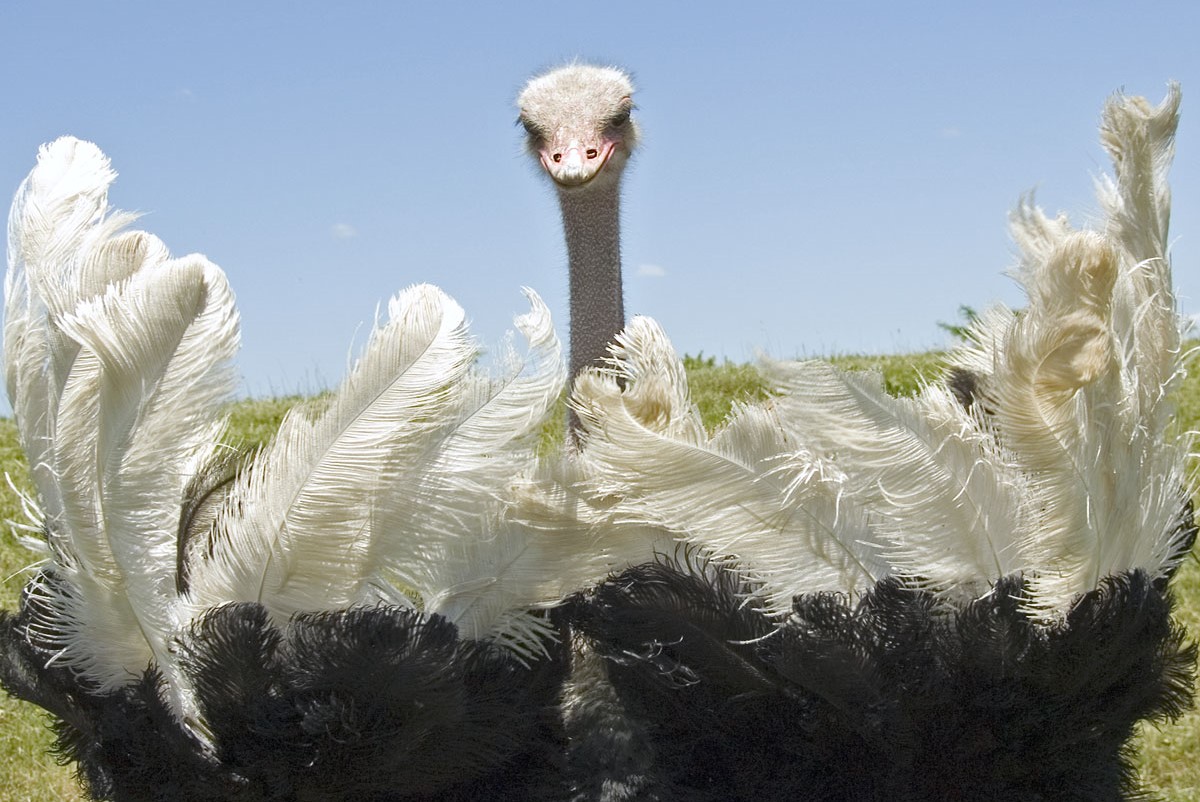 The ostrich is the largest, tallest and heaviest species of bird living on earth, and among the most unique. The order Struthioniformes consists of birds classified as ratites. Ratites are a group of flightless birds that include emus, rheas, cassowaries, and kiwis.

The ostrich has a very long neck and long legs. The head is small, broadened and flattened. Its bill is straight, short and bluntly rounded at the tip. The eyes are strikingly large with thick black eyelashes. It has two toes (this is the only bird with two toes; all others have three or four). The larger toe is furnished with a claw.

They are sexually dimorphic; the sexes look different. Male plumage is mostly black. However, the tail and flight feathers are white and loosely curved. The plume’s shaft runs directly down the centre, dividing the feather into equal parts. In the subspecies camelus australis, the skin of the head, neck and thighs is devoid of feathers and are a lead grey in colour, covered with fine hairs. The female is slightly smaller and its plumage is grayish brown.

Struthio camelus australis is commonly called the southern ostrich. It is found exclusively in southern Africa. It lives in a range independent of other subspecies of ostrich, South Africa, south of the Cunnene and Zambezi rivers.

Ostriches are found in the open, semi-arid savannahs, or treeless areas. They tend to live in mixed groups of 5 - 50 individuals but sometimes they live alone.

They feed chiefly on vegetable matter; hard and dry leaves, gourds, and fallen fruit. It is somewhat omnivorous, as it also consumes some invertebrates.

Ostriches are polygamous, with each male having a group of three to five hens. A dominant male will defend a territory between 2 and 15 square kilometres. He will mate with the major hen and other females within the area.

The breeding and mating behavior is quite elaborate; with the male sitting on his hocks, moving his wings up and down while throwing his head from side to side. The male stretches its wings and begins shuffling, jumping and swaying. He pumps air into his neck, closing off the breathing passages, and then exhales with a loud booming noise, sometimes interspersed with some quite melodious calls. The receptive female walks with her head down, popping her beak and shaking her wings ("clucking"). When approached, the female will sit, allowing the male to mount from the back. Unlike most birds the males have a copulatory organ, which is retractable and 20 cm long.

The hens lay in a common nest consisting of a mere scrape in the ground. Together they lay up to 30 highly glazed, cream-coloured eggs. Fifty to sixty have been found in a common nest. Eggs are 15 to 20 cm and weigh 1.6 kilos, which is only 1/60th the weight of the female. This is the largest egg laid by any bird. The male broods throughout the night and for most of the day, being relieved for short spells by one of his hens. Incubation time is approximately 42 days. The hatching process takes about one hour. Both parents are involved with the rearing of the young. Typically, the male defends the hatchlings and teaches them to feed, although males and females cooperate in rearing chicks. The young ostriches are well cared for, often sheltered under the outspread wings of adults. During the first year of life, chicks grow about 25 centimetres per month. At one year of age, they weigh around 45 kilograms. Ostriches become sexually mature when 2 to 4 years old; females mature about six months earlier than males.

Powerful legs enable them to escape from their predators with 2.2 - 2.8 metre strides at speeds of up to 80 k/h. Their feet are so powerful that they are often used as weapons, particularly by the male who guards the nest. The kick, which has been known to disembowel a lion, is more potent than a kick from a horse. The highly developed thigh muscles play an important role in the bird's dance ritual, performed during courtship.

Their sight is excellent, using eyes that are 5 cm in diameter (the size of a tennis ball). Ostriches, zebras and other herd animals group together in a symbiotic relationship. The ostrich with its keener eyes and the hoofed animals with their keener sense of smell make a very useful combination for early detection of predators. An ostrich will perform an "injured act" to lead predators away from its nest. Once the predator is a safe distance from the eggs or young, an adult ostrich can speed easily away, leaving the predator far behind. In fact the only predator that can outrun an ostrich is the cheetah, but even the cheetah does not have the endurance of an ostrich.

Note. The ostrich does not bury its head in the sand. This is a myth.

Young are taken by jackals, hyenas, lions, cheetahs, and birds of prey. Populations are shrinking due to pressure imposed by development. Ever expanding human numbers and enterprises are breaking up the savanna. However, the ostrich may fare better than other savanna species because it is not a nuisance to ranchers. The plumage trade has stopped being a threat since ostrich farms have been established. There are many ostrich farms in African countries that produce ostriches for sustenance needs. These commercial farms meet the demand for ostrich products, so wild populations are not as affected by demand as they have been in the past.