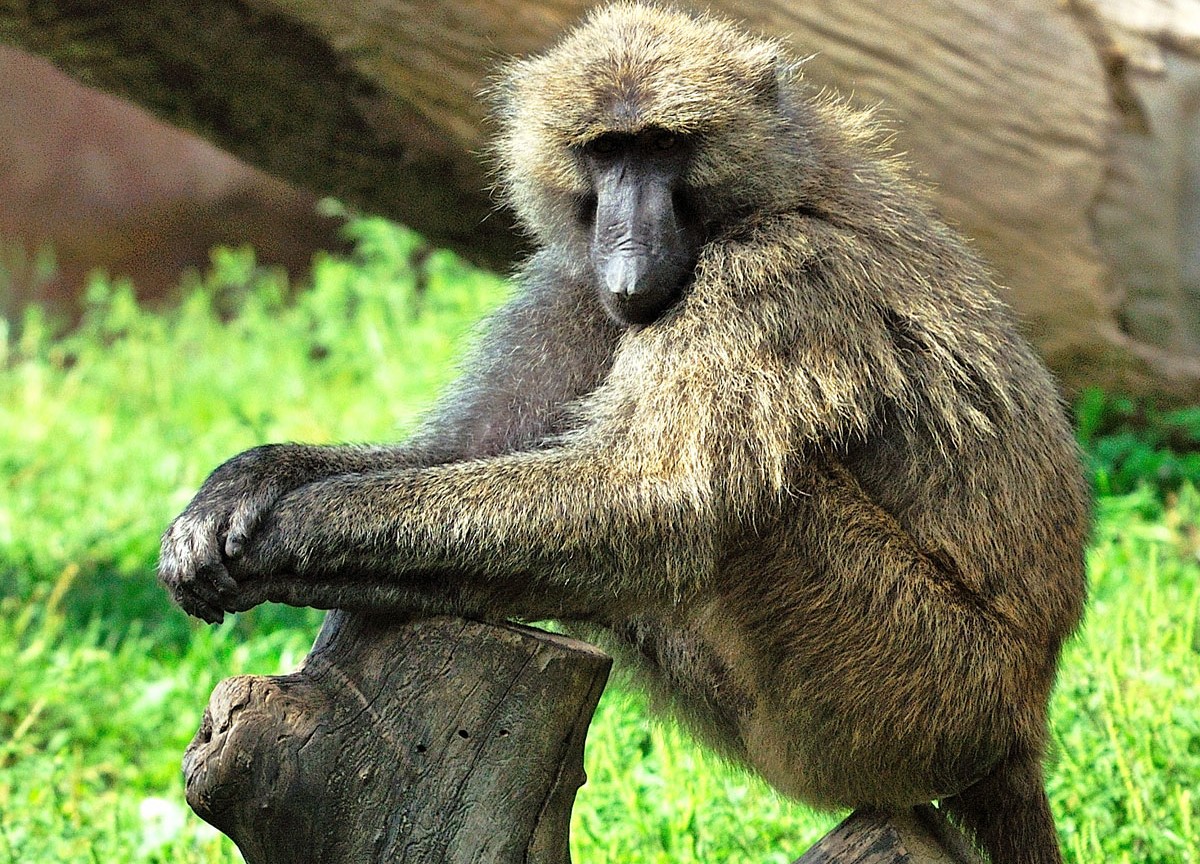 The olive baboon is large and heavily built with sturdy limbs. Their long, pointed muzzles and the way they stand and walk on all four limbs - quadrupedally - makes them look rather doglike. When they run, it resembles the galloping of a horse. They have very powerful jaws and very long, pointed canine teeth. Eyes are closely set below a prominent brow ridge. The ears are large and nearly naked, but hidden in the thick pelage of the adult.

Adult males sport a thick grey ruff of fur around their cheeks. The skin on their faces, ears and on the ischial callosities of the buttocks is grey to black and covered with very fine hair. Hands and feet are wide with stubby digits; the thumb and forefinger being fully opposable with precision grip. The tail is non-prehensile and can measure from 40 - 58 cm. Tails are generally held high and away from the body, dropping downward at about the halfway point, making the tail appear bent. Females often use the tails of their youngsters as leashes to hang on to as the little ones learn to explore their habitat.

These baboons also have cheek pouches where they are able to store food as they move about foraging. Olive baboons range in height from 60 - 86 cm and weigh from 22 - 37 kg, with the males being larger - sometimes up to twice the size - and more powerful than the females. Young baboons are darker in colour, almost black, and lack the heavy facial fur. As a result, their ears tend to stick out, and look too big for their heads. As they mature, they lose the juvenile coloration and take on the speckled olive grey/green of the adults.

Olive baboons occupy many different habitats over their large range. A common habitat to find them is the savanna, but other areas include moist, evergreen forests, open grassland, rocky cliffs, dry woodland, desert habitats, and in areas near human settlements. They cover all areas from the floors of steep valleys to altitudes of over 2300 m and survive well in places where there is varied rainfall, hot climates and frequent drought interspersed with seasons of local rains.

Baboons are omnivorous. They are experts at finding food in all the environments where they range, on the ground, in the trees, underground. They eat a variety of grasses, seeds, roots, leaves, fruit, bark, invertebrates (i.e. grasshoppers, spiders, scorpions and fresh and saltwater shellfish), lizards, turtles, frogs, fish, eggs and young of nesting birds, crocodile eggs, and young mammals.

They also eat other primates. They are opportunistic, feeding on whatever they find. They shuffle feet and hands through the grass as they move or sit to displace a possible meal. They are active hunters, either as individuals or in a group sometimes taking down something as large as a young gazelle. Both males and females hunt. Baboons that live close to human settlements often supplement their diet with the produce grown on farms or in gardens, or with garbage.

A troop is a large group of males and females of all ages. Males are in constant competition for females. A new male trying to join an established troop will try to form an alliance with a female to help him gain acceptance. Reproduction is non-seasonal, but conceptions peak during the rainy season. This allows the infants to be born in times of good food supply.

Females in estrus reveal their condition with their swollen pink perineum (their buttocks). They present to the males with whom they wish to mate, generally seeking out the strong, well-established senior males. While she is pregnant, the female's perineum turns dark red in colour. The female gives birth to one young, rarely two, after a gestation period of about 187 days. A mother supports her newborn clinging at her breast with one arm, but by four or five weeks old, the baby begins to ride on her back, at first hanging on with all four feet, and later riding jockey-style on her back. The baby takes its first solid food at five or six months and is weaned and independent at eight months.

Babies can move well at one month and at two months, can climb over logs and pick up objects with their hands instead of their mouths. By the time they are four to five months old youngsters are spending time together and playing in small groups. Youngsters depend on their mother for food and transport for most of their first year. The male helps with the rearing and grooming of the youngsters, and will defend his females when there is a need. The youngsters will often choose to follow or sit near the males. At one year the young are self-sufficient for food, but remain dependent on the mother for protection and guidance until about two years of age. The youngsters are tolerated by all members of the troop, but as they mature, the young males are chased out of the family group. Olive baboons have a life span of 25 to 30 years.

Baboons are diurnal and spend most of their day on the ground. They are a matriarchal society organized in a strict hierarchy. They spend their nights sleeping in trees or cliffs and travel as a family to feeding grounds in the morning. Before they start out, there is a period of socializing and the youngsters play. Then they head out to spend the day moving and foraging. Older juveniles lead, followed by females and young juveniles; then older males, mothers and infants.. Young males bring up the rear. They stop to rest in the heat of the day, then move on to forage some more. As the day comes to an end they return to their sleeping site and indulge again in some social activities like grooming before sleeping. They prefer a sleeping site that is in a high rocky cliff, or a very tall emergent tree where they are safer from predators, and will not have to come down to the ground in order to move about.

Olive baboons usually live in troops of 20 to 60 animals, sometimes as many as 100. There are perhaps seven or eight males in a typical troop with twice as many females and their young. Family groups of females form the core of a troop and they will spend their whole lives with that troop. The female rank order is family-based; daughters inheriting their mother's rank. A young male will be chased out of his birth troop as he reaches maturity, and he will have to fight his way into another. He may change troops several times over his lifetime. A troop range may cover from 400 to 4,000 ha and members of a foraging troop will spread out, but maintain contact.

When troops of baboons meet, the larger group may displace the smaller one, or they may just ignore each other. Males of one troop may chase their females away from the males in the other troop. Occasionally there may be fights between troops. Troops are well protected by the cooperative defense of the adult males who will move towards a source of danger and demonstrate typical vigilant behaviour. Should a sudden alarm send a troop racing for cover, the males and sometimes adult females will stay behind as a rearguard. Very few large carnivores will try to penetrate a troop's defenses.

Baboons have dozens of vocalizations, from grunting to roaring to screeching. They also communicate using a large number of facial expressions - staring, raising eyebrows, and showing off their canine teeth are all aggressive displays. Other body language seeks reassurance or shows submissiveness. They are very tactile, spending much time each day grooming each other to reinforce social bonds as well as keep clean. Olive baboons are known to interbreed with other species of baboon, such as the Hamadryas baboon (P. hamadryas).

Predators of olive baboons include cats of all sorts (lions, leopards, servals) as well as wild dogs, hyenas, crocodiles, and even chimpanzees. Infants and juveniles are vulnerable to raptors like eagles. Baboons living near humans must be on the lookout for domestic dogs as well.

They suffer from loss of habitat due to agricultural expansion and they are subject to organized extermination when they turn to raiding crops. Where baboons live beside humans, there is conflict, and at times populations of baboons have even been relocated to help the farmers and save the baboons. Baboons are also hunted for food and sport.