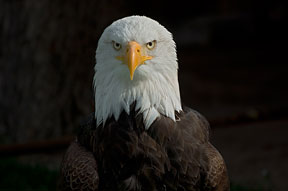 The adult has a distinctive snow white head and tail. The body is brownish black. The large bill, eyes and feet are bright yellow. In immature birds the tail, head and body are dark brown, less black than adults, and show some white on the underside of the wings. In some, the plumage is irregularly but extensively blotched with cream or white, with the bill brownish, eyes pale yellow-gray, feet lemon yellow. They take four to five years to acquire adult colouration. Females are larger than males weighing approximately 5.8 kg on average, where as males weight 4.1 kg. Wingspan can reach up to 2.44 m.

This northern subspecies, H. l. alascanus, occur in northern and eastern Canada, the northern United States including Alaska. They range further south on the Atlantic coast. Although their distribution is widespread, numbers vary regionally. Ontario northern populations are healthier than those in the south.

They prefer areas with an abundance of lakes, large rivers, sea coasts and surrounding areas of old-growth and mature stands of coniferous or hardwood trees. Trees selected for perching, roosting, and nesting must have good visibility, an open structure, and proximity to prey.

These eagles feed largely on fish either self caught or taken from Osprey. Birds and small mammals such as muskrats, squirrels, and rabbits are also consumed. They scavenge for carrion and catch injured and crippled water fowl during or after the hunting season.

It is surmised that these raptors mate for life. Breeding season lasts from December to April, although it begins earlier in the most southerly range. It is timed so that hatching coincides with abundant food supplies. These eagles use the same nest each year. They build a huge aerie (nest) of sticks and twigs, or in northern climes on rocky cliffs. The nest takes weeks to construct and is increased yearly. The female usually lays two eggs (pale blue to white). Incubation is shared by both parents and takes 35 days. Fledgling takes 10 to 11 weeks with usually one chick surviving to maturity. As the chicks grow they learn to tear up their own food and the parents leave them for longer periods. The chicks practice flying from the aerie but return nightly. This continues until the parents force them to move at the end of summer. Breeding occurs after maturity at four to six years of age.

Bald eagles are very powerful fliers with broad wings with deeply slotted tips which are ideal for soaring and long distance flying. They soar on thermal convection currents. They can reach speeds of 56 to 70 km per hour when gliding and flapping. When diving speed is between 120 and 160 km per hour and while carrying fish, or other prey items they can fly at 48 km per hour.
Their talons are long and sharp for seizing prey. They are adept fishermen and often sit at some vantage point over water waiting for fish to rise, and then swoop to scoop one from the surface. With exceptionally acute vision they will attack diving birds and strike at fish where they are, rather than where they appear to be due to refraction created by water.

They become somewhat migratory when water freezes over, and will move to areas of open water. When migration becomes necessary, routes are selected which provide the advantages of updrafts and thermals. Diurnal migrations utilize thermals produced by the sun.

Loss of suitable habitat. Disturbance at nest sites, loss of nesting trees and loss of waterside habitat from human occupation. It is extremely sensitive to human activity, and is found most commonly in areas free of human disturbance. Today, bald eagles remain susceptible to illegal shooting, accidental trapping, poisoning, and electrocution.