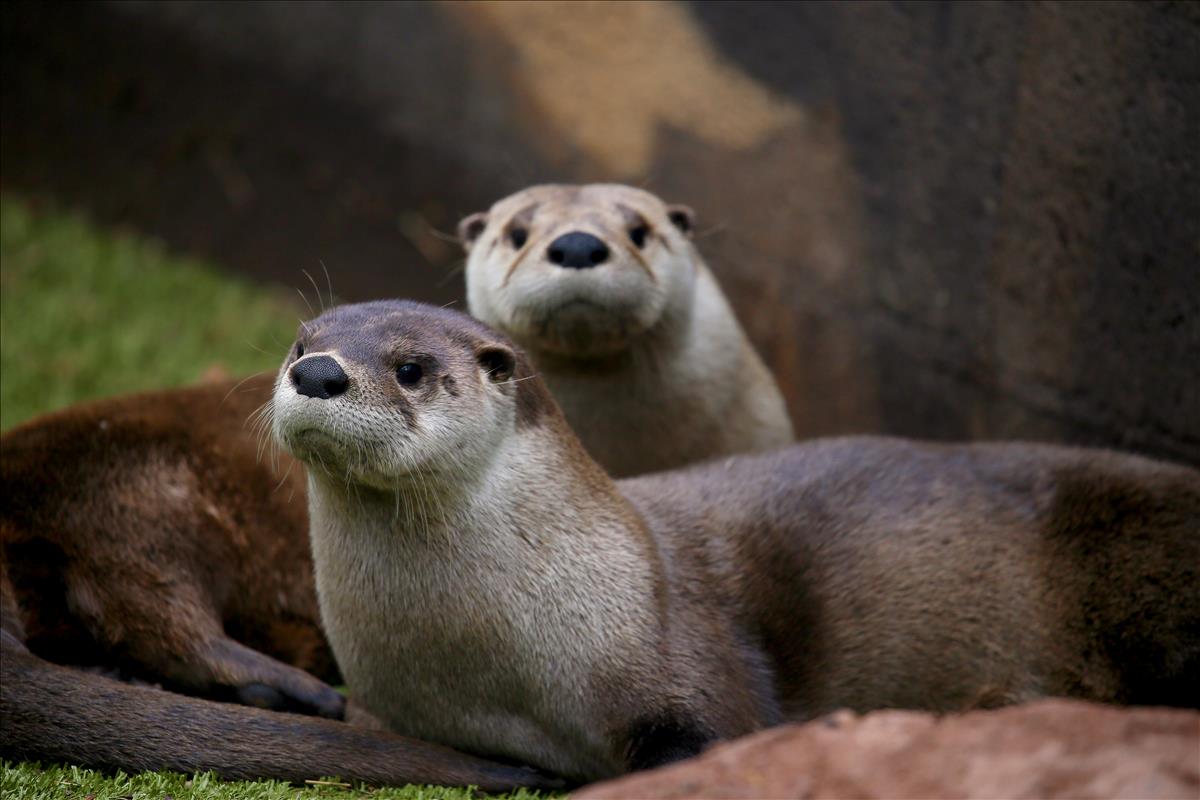 A Characteristic of amphibious mammals is the thick and lustrous pelage. The underfur is short, dense and soft, intermixed with long guard hairs which are a glossy dark brown, usually paler on the underparts. The long vibrissae (tactile hairs) and the throat hairs are a silvery grey. The winter pelage is essentially the same as that of the summer. Well adapted to life in the water, the otter's body is long and streamlined from the bulbous nose pads to the long, tapered tail. The body is lithe and elongate as well as being solid and muscular. The comparatively small head is broad and distinctly flattened. The ears are small and may be closed underwater. The eyes are also small and somewhat anteriorly placed. The neck is scarcely narrower than the head and very muscular. The tail is also very thick and muscular and is about one-third the total length of the otter. It has short, powerful legs, the feet being large and broad with fully webbed toes. The claws are short. In adult otters, the male averages about 1% larger than the female in basic measurements and sometimes in mated pairs, the male may appear to be nearly one-third larger than a younger mate. The tail of the juvenile is relatively shorter than that of the adult, but the general appearance except for the size is similar.
Total length of adult: 90.0 to 120 cm
Tail: 30 to 47.5 cm.
Weight: 6.8 to 9 kg.

Throughout North America, north of Mexico, except the treeless Arctic tundra and the desert areas of Texas, New Mexico, Nevada, Utah and California.

The otter is amphibious and prefers to spend its life chiefly along rivers, larger creeks and lakes.

It has a varied diet, but feeds almost exclusively on animal matter, chiefly aquatic. Minnows, sunfish, trout, catfish, sculpins and perch, and other fish are caught by direct pursuit and taken to dry land to consume. Frogs, mud puppies, crayfish, and clams are also eaten, as well as water beetles, water bugs, caddis flies, and other insects. Rarely, a muskrat, young beaver or duck may be taken.

The North American Otter is monoestrous (reproductive cycle occurs only once a year) with a long (42 to 46 days) oestrous period during which, successive periods of heat occur about six days apart if fertilization does not take place. Delayed implantation also occurs in this species. The mating season is from late winter to early spring, immediately after the birth of the young (post-partum oestrus). The apparent gestation period varies between 9.5 and 12.5 months, including the delayed implantation period. The litter consists of two to four cubs, sometimes only one, rarely five or six. There are four mammae, all inguinal (near the groin). A newborn otter measures about 20 to 25 cm and weighs 132 g. The head is large, the tail stubby and tapered. It is furred and the eyes are closed. Growth is altricial (requiring long parental care). The eyes open after approximately 35 days and the young otters begin to play at five to six weeks of age. They venture out of their nest at 10 to 12 weeks and the female begins to teach them to swim and hunt. The male usually joins the family group after they are six months old having been driven off by the female when the young are very small. The family then stays together for about a year, the male assisting in the raising. At one year of age, the otter is nearly full grown and at two years of age, is sexually mature.
The males are not usually successful breeders until they are six to seven years old and are pugnacious only during the breeding season. Copulation usually takes place while in the water, either above or below the surface.

Locomotion - otters swim with swift, undulating, serpentine motion both on the surface and underwater. They swim and dive with ease, agility and speed. Progression is made chiefly with the body and tail, with only some paddling of the hind feet. A spiral motion is also used to great effect. Maximum speed on the surface is 10-12 kph and the underwater speed is almost as fast. It can stay submerged for two minutes or more, and regularly swims for considerable distances under ice, obtaining oxygen from air bubbles under the ice or open holes in the ice. They may tread water and extend the neck high above the water and peer about. Otters swim with scarcely a ripple and dive with little splashing. On land they run with the typical musteline loping gait. On soil surfaces they may run at speeds of 13-16 kph but on snow and ice where they can slide, otters may progress at a speed of 25 kph. They will take three or four leaps, then slide four to seven metres with their forelegs laid back against their sides. They travel a great deal, often covering 80 to 160 km. of stream bank during a year. Even from an established den, an otter may travel 32 to 49 km returning after an absence of several days. The home range of a mother tending her young is much less so.

Denning - the den of an otter is well-hidden and most apt to be located in a bank along a stream or lake. At times an abandoned beaver lodge is utilized. The den may be simple with short tunnels or very extensive and complicated. They may construct beds of dry wood chips, leaves and bark in hollow logs, stumps and roots. On occasion they will take over the bank burrow of a beaver or muskrat. When traveling they may make a temporary nest of grass near the water.

Senses - the only loud notes of the otter are a snarling growl when it is angry and a shrill whistle when in pain or during mating time. It also may hiss when angry, have a low purring grunt and bird-like musical chirp, evidently a call note. Its senses of smell and touch are acute. The ears may be closed underwater. The vibrissae are used when foraging along the bottom of rivers and streams.

Activity - the otter may be active any time of the day or night and although generally considered nocturnal, is more crepuscular and is often diurnal in its habits. It does not hibernate, being active year round. It is tolerant of most weather conditions. River otters are the "playful" mammals of North America. As far as anyone can tell, they appear to simply enjoy the fun of a social outing whether it be tobogganing, somersaulting underwater, playing with a rock, shooting the rapids or an earnest game of tag. An otter slide is made by the animal sliding down a slope, forming as if it were a furrowed trail in the particular spot. These slides can be quite short or several metres long. In soil they may be 15 to18 metres in length.

Hunted for their fur. Pollution of rivers and streams produces loss of habitat. Other than humans, the otter has few serious enemies. Possibly a bobcat, coyote, great horned owl or bald eagle may attempt to catch an otter kit, but the young are carefully guarded by the mother. An otter caught migrating overland is vulnerable to attack by coyotes or wolves.