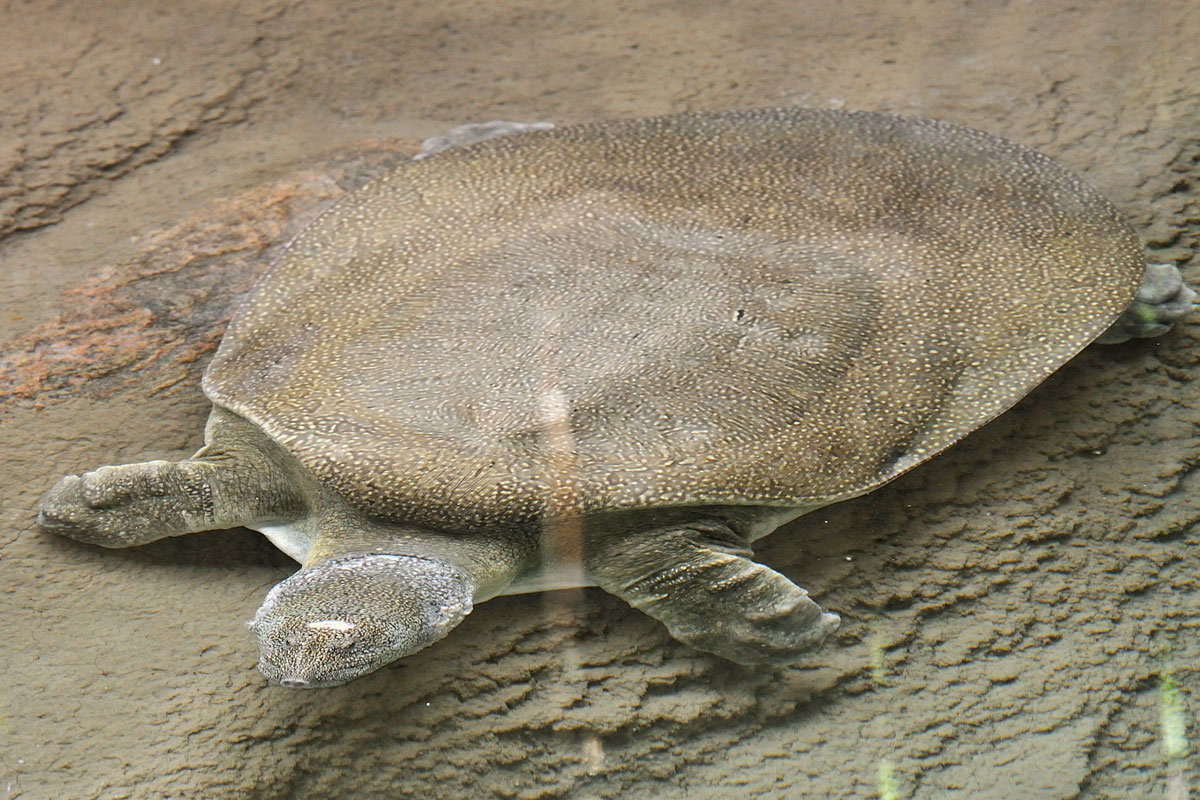 DESCRIPTION: This turtle, also called the African soft-shelled turtle, is the largest of this Genus. The flat carapace bones are pitted and covered with thick, leathery, olive to brown coloured skin which has on it a spattering of white spots which may be ringed in yellow. These spots may fade with age. The oval shaped, flat carapace is thickened over the neck. The elongated head ends in small, snorkel like nostrils and the skin over the very sharp mouth is thickened.

Limbs have three claws each and are webbed between the digits. The head and limbs are olive colour with the spots as well. The chin and neck have larger white spots and the underside of the limbs is yellow. The plastron is white. The male tail is longer and thicker, with the cloaca located near the tip whereas the female is located closer to the base. Juveniles have rows of tubercles on the carapace as well.

These turtles are found along the length of the White and Blue Nile Rivers as well as the tributaries of the Congo River and the Sombreiro River in Nigeria. They are also found in the Atlantic Ocean off the west coast of Africa and in the Mediterranean Sea as far north as the island of Kos in Greece. They are also seen up rivers on the east side of the Mediterranean.

Nile Soft-shelled turtles are located in the fresh water of rivers and lakes with soft sand or muddy bottoms. They also are found in brackish water as well as salty waters of the Atlantic and Mediterranean.

Their omnivorous diet includes aquatic insects, molluscs, crustaceans, frogs, fish, and other turtles, live and dead mammals, along with fruit, nuts, and seeds.

Courtship and mating behaviour is unknown, but egg laying occurs from the end of March to July depending on the latitude. The nests are dug in sand or earthen banks as well as on islands which are located on the seashores of the Mediterranean and the west coast of Africa especially near the mouth of rivers. In Turkey and Israel, they nest on sites which are up river. From 25 to more than 100 white, brittle, spherical eggs are laid. Incubation is between 60 - 80 or more days. The hatchlings are greenish brown in colour with noticeable yellow spots, ringed with brownish black on the carapace. They are 42 - 54mm in length. Unlike most other turtle species in which the sex of hatchlings is determined by the nest temperature, the sex of hatchling soft-shelled turtles is determined genetically.

Nile soft-shelled turtles are adapted to various aquatic environments such as salt, brackish and fresh waters. Their large, smooth, streamlined carapace, which is soft at the periphery, enables them to move through the water with ease. The webbed limbs facilitate swimming with efficiency as they act like paddles. They are strong swimmers in turbulent water. They can stay submerged for long periods of time because they are able to remove oxygen from the water which they pump in and out of the mouth. Oxygen is removed because the throat is lined with blood rich villi (tiny projections which increase the surface are in gas exchange) which act like gills. This buccopharyngeal breathing (gas exchange occurs through capillaries in mouth cavity as air is passed in and out) provides 30% of the oxygen they require. The other 70% of their submerged oxygen needs is attained through absorbing it via the skin. Moreover, they are so large they can swim in the ocean’s salt water without becoming dehydrated.

The prominent tube like nostrils enables them to breathe oxygen from the air while remaining submerged which, along with their olive carapace colouration, camouflages them from predators because they appear dark like the water while their white plastron appears as clouds from below. They are fast swimmers, have aggressive temperaments and have formidable jaws which protect them if attacked.

They are naturally curious, intelligent, and playful but are known to be ambush hunters lying quietly in the muddy stream bottoms then rapidly reaching out with their long, flexible necks grabbing prey with the strong jaws; the claws aid in holding onto the prey. They then move the jaws in a scissor like fashion which kills the prey. Along the Sombreiro River in Nigeria a group of 20 Nile Soft-shelled turtles have been observed eating goat and bush pig carcasses. These turtles are diurnal and are known to bask on the shore for up to a half hour. Their strength is illustrated when one was seen climbing a metre high, mesh fence.

Large, Nile soft-shelled turtles populations in the Mediterranean are critically endangered because they are a common by catch of shrimp trawlers. Since those caught have a carapace of over 50cm, they are the adult breeding population which is being trapped. Some tourist boats are providing food on the shore so that tourists can view these turtles which can make them dependant on humans for food. In many parts of their range they are eaten by humans; for example, in Sudan the turtles are killed when they come ashore to lay eggs. The carapace, with untanned fish skins stretched over, are used as guitars. In addition, Nubian tribesmen use the carapaces as shields.