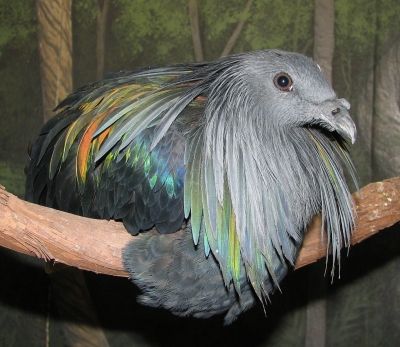 This is a large heavy-set pigeon. The male is stocky and dark coloured with unique long fowl-like hackles on the neck and a very short, all white tail. The head and hairy upper neck feathers are a dark blackish grey with a silvery purple bloom. The upper-parts are a shining dark green or a coppery green; the under-parts a dark, iridescent green or green blue. They have a heavy black bill with a pronounced cere. The feet are purplish red with yellow or buff claws. The female has a smaller cere, is similar in colour but has shorter hackles and has more coppery red on the mantle and browner under-parts. Juveniles lack the neck hackles and are entirely brownish black including the tail. The young look very similar. When maturing, the hackles appear first before the tail turns white.

Most of the Indo-Australasian region from the Nicobar Islands and Mergui Archipelago eastwards to the Philippines, New Guinea and the Solomon Islands.

The Nicobar pigeon is found throughout its range inhabiting only small wooded islands, typically off larger landmasses. It also inhabits mangroves, bushes, lowland, and foothill forests up to at least 700 m. It will tolerate selectively logged forests.

The breeding season is quite prolonged, from January to November depending on the location. They nest in colonies usually on the smaller islands. Undisturbed colonies may number thousands of pairs. The nest is a loose platform of twigs, placed as low as two metres off the ground in undisturbed sites or just below the canopy at a height of 12 metres in disturbed sites. Several nests may be built in a single tree. One elliptical faintly blue-tinged white egg is laid. The nestling is devoid of even down very much like the domestic pigeon. Fledging takes up to one month.

Nicobar pigeons are highly nomadic. They frequently commute between islands; visiting larger islands to feed, even reaching mainland islands such as Papua New Guinea but retreating to smaller ones to breed. They often fly in flocks of up to 85 birds at a height of 60 m plus, with a distinctive flight profile; long neck, broad wings and a very short tail. When flushed from the ground, the bird flies up with a whirr of wings to land in the upper level of the forest. When threatened, the bird erects its neck and back feathers, throws its head forward opening the bill wide emitting a grunting noise. They feed on the ground, singly or in pairs and are particularly active at dawn and dusk and could therefore, be called crepuscular. The large eyes and white tail appear to be adaptations to this activity in semi-darkness.

They are hunted in considerable numbers for food, and also for their gizzard stone which is used in jewelry. This species is trapped for the pet market. Its available nesting habitat is decreasing. The offshore islets which it requires are often logged for plantations, destroyed by construction activity, or polluted by nearby industries.