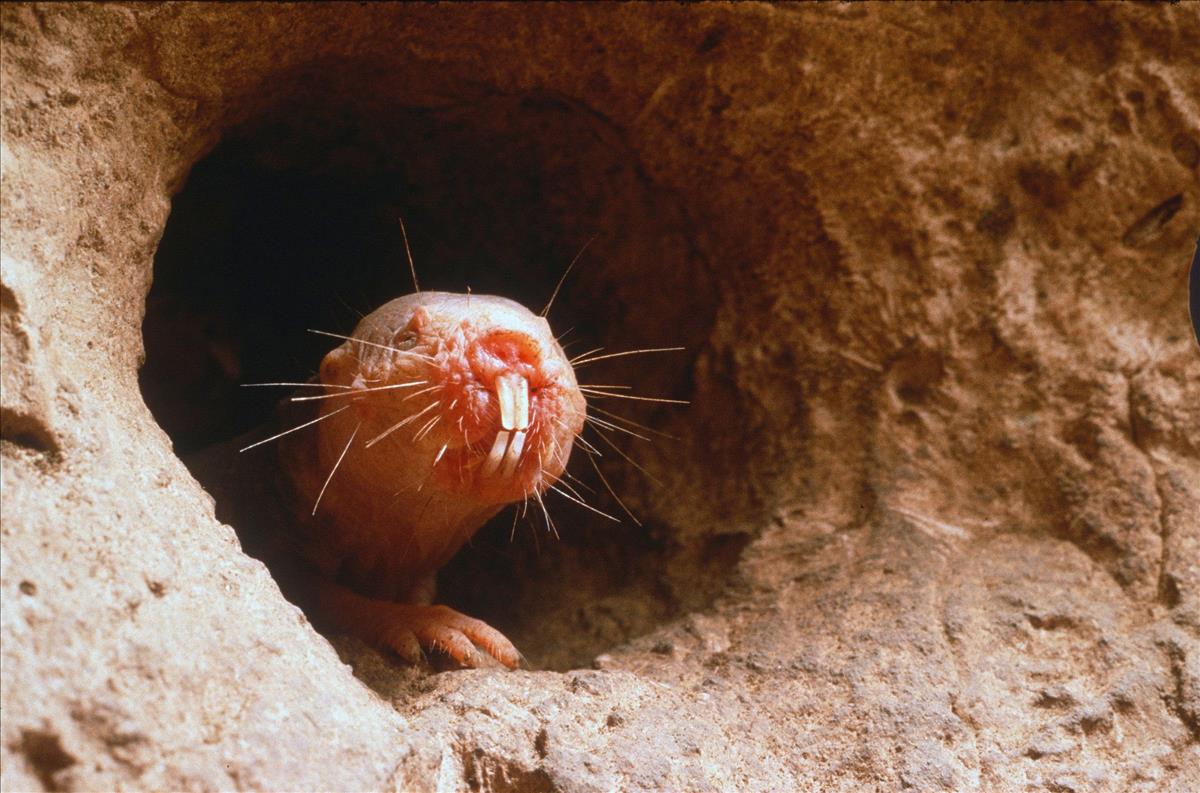 The naked mole rat, also known as the sand puppy or desert mole rat, is a very unusual burrowing rodent. Although, as their name indicates, naked mole-rats do not have fur, they are not completely hairless. They have sensory whiskers on their faces and on their tails, and have hairs between their toes. The body is cigar shaped and the wrinkled skin is a pale pinkish-grey. Their legs are thin and short. Front feet have five broad, flattened digits each with small sharp claws. Hind feet also have five digits with claws. The head is short and chunky; ears are simple holes in the skin with no external flaps. Eyes are tiny. They have two pairs of very long protruding incisor teeth.

The queen and breeding males are generally among the heaviest individuals in a colony, and the queen is the longest individual. When a female becomes a queen she actually grows longer, even though she is already an adult, by increasing the distance between the vertebrae in her spine. There is no sexual dimorphism between the non breeding males and females. Length of head and body: 80 - 92 mm; tail 28 - 44 mm. Weight (dominant female): 53 g or more; non-workers 38 g; workers 32 g.

Naked mole-rats live underground in arid savannah and grasslands near the equator. Their population density is highest where their food plants are most abundant.

Herbivores. Eat mainly tubers, roots and corms (bulb-like underground stems) that protrude into the burrow tunnel. A colony rarely destroys any one food source, but will harvest their food, leaving part of a plant alive to grow for future use. When a food supply is found, it is shared amongst the entire colony. They do not drink, but obtain all moisture needed from their food.

In established colonies mating occurs between the larger, dominant female queen and only a few chosen males. Using behavioral (aggression) and chemical control (pheromones), the queen prevents other adult females from reproducing. This tight control over sexual activity is essential if unity within the colony is to be maintained. The duration of gestation is approximately 70 days. A queen can produce a new litter every 80 days, and can have up to five litters per year. Pups generally weigh less than two grams at birth. The number of pups per litter is quite variable. The average is about 12, with a maximum of 27. The queen nurses the pups for about four weeks, although they may begin eating solid food at as early as two weeks of age. Pups also eat feces that are provided for them on demand by the workers. This not only provides nutrition, it also inoculates their digestive system with beneficial gut fauna. Pups begin performing work behaviors (digging, sweeping, carrying, etc.) at the age of three to four weeks. Maturation rate is variable, but in general juveniles are physiologically capable of reproduction by the age of one year. Depending on the survival rate of the litter, the queen may have several litters each year. Due to many generations of inbreeding, all members of the colony are genetically similar.

Like ants and bees, naked mole-rats are considered eusocial animals. They live in highly structured, co-operative colonies. This eusocial lifestyle includes reproductive restraints (only a select few breed while most sacrifice their breeding potential), many generations living together, and a strong division of labour. Most of the colony is workers, involved in finding food, caring for the young, protecting the colony, and keeping the burrow clean. Burrows are complex systems of tunnels with established protocols which are usually followed. For example, when two naked mole-rats want to pass each other in a tunnel, the smaller one usually crouches down so that the larger one can crawl over top. To change directions, they will use a tunnel junction to execute a three point turn. To move sand within the tunnel, a chain of naked mole-rats forms to move the dirt along. One animal will dig with its teeth and sweep the dirt back with the broom-like hairs on its feet. Then the next animal and the next will continue to sweep the dirt along until it can be pushed out of the tunnel. They are highly adept at moving underground and can move backward as fast as they can move forward.

They are well-adapted to their underground existence and have highly unusual physical traits which enable them to thrive in a harsh, underground environment, including a lack of pain sensation in the skin and a very low metabolism. They are born to dig (fossorial) and do so primarily with their prominent incisor teeth. Their large, protruding teeth are used to dig, and their lips are sealed just behind the teeth to prevent soil from filling their mouths while digging. They have poor eyesight, but instead they communicate in the dark through touch, smell and especially noise (they make at least 17 different sounds). They do not have sweat glands or fat layers, and as a result they are the poorest thermo-regulators of all mammals. Since appropriate humidity and temperature levels are crucial for survival, an underground existence is an adaptation in such a hot, arid climate. Burrow temperature and humidity are kept at a constant 30 - 32 ˚ C and 90% respectively, and so the naked mole-rats are able to maintain a body temperature of approximately 32 ˚C. Burrows are dry and provide protection from sunlight and enemies. The available air in the burrows is limited, and so to compensate, their blood has a high affinity for oxygen.

Snakes and mole-rats from other colonies. Naked mole rats are not threatened. Despite their tough living conditions, they are widespread and numerous in the drier regions of East Africa. They live in areas with little agriculture and minimal development, such that they do not pose a significant agricultural pest. However, they do eat crops such as casava and sweet potatoes, both important agricultural produce, and expansion of agricultural activities into the range of the species could lead to the species being regarded as a pest.