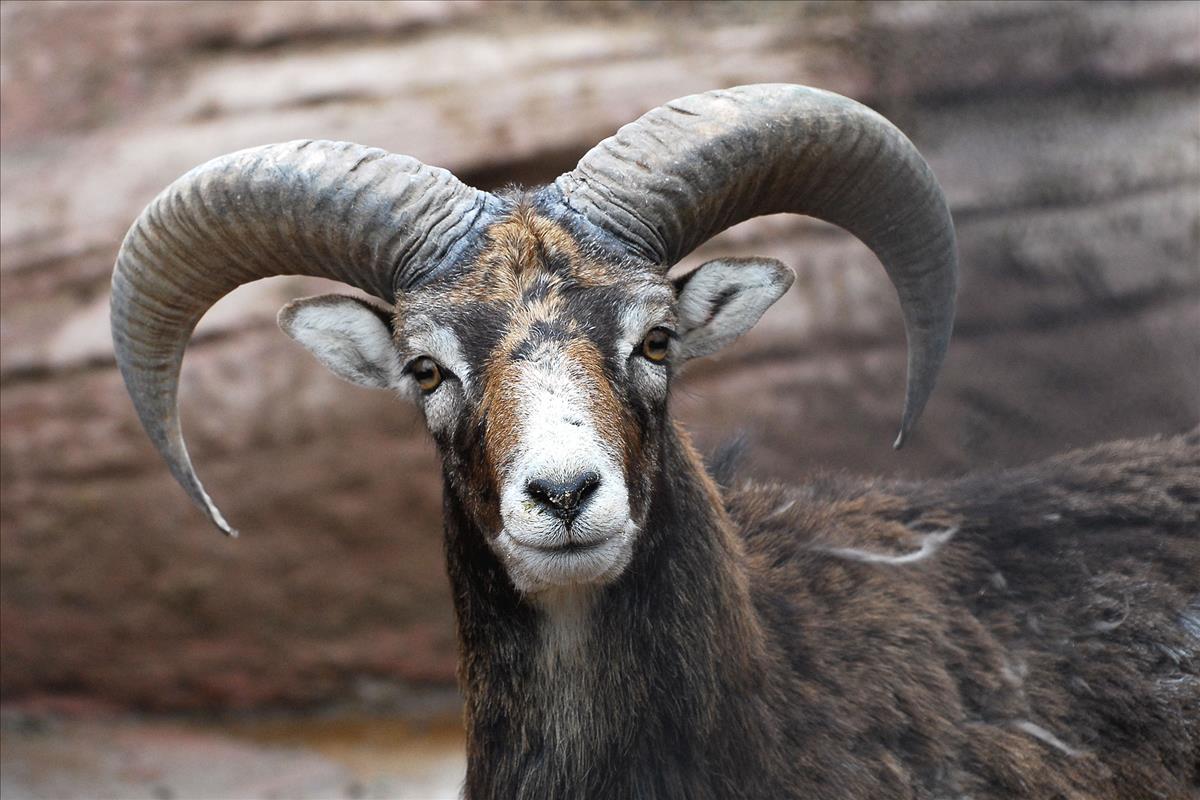 Mouflon are a species of wild sheep, and are thought to be one of two original ancestors of all modern day sheep. They have a reddish-brown, short-haired coat with a dark stripe along their back and lighter coloured side patches. The underparts are white as well as the bottom half of their legs. They also have a white muzzle and white circles around the eyes. There is a fringe of long hair down the front of the neck.

The males have horns and the females may or may not have horns. Males have larger horns then the females and are usually around 85 cm in length. The size of a males horns determines his status in the group. Their curved, spiral horns arch backward over the head. They don't flare out at the end as most wild sheep's do. The curve is almost one full revolution.

Originated on the islands of Corsica, Sardinia, and Cyprus, but have been introduced into many parts of Europe.

Live in mountainous regions, usually above the tree line or in mountain meadows. In Corsica, it lives on steep-sided rocky peaks, where it is protected from predators.

The males and females live in separate groups and only come together during the mating season. The rams' dominance is determined by his age and the size of his horns. They mate, or go through a rut, in autumn to early winter. When breeding begins, the rams fight for territories on which they gather their harems of ewes. Two rams will back away from each other, then charge, meeting head-on with a clash of foreheads. They crash their horns together to re-enforce dominance.

The ewes don't mate until they are about two to three years old. Males don't mate until they are about seven years old because they have to establish a strong social standing before being allowed to mate. The gestation period is about 210 days with one or two lambs, sometimes three, being born in April. The ewe will go into cover to have her lamb, which is up on its feet within minutes after birth. They can run about soon after birth, but are closely tied to the mother for suckling every 10 - 15 minutes. They become sexually mature at 18 months to two years. Their life expectancy is about 15 years, although they have lived in captivity for over 19 years.

During the winter they grow a woolly undercoat that keeps them warm. Fights seldom lead to serious injuries and afterward the winner makes no further attacks. When rams are fighting for their harem of ewes, there is seldom any damage done. After the fight, the two will graze together and every now and then the winner starts what is called an appeasement ceremony by presenting his neck for the other to lick, sometimes going down on his knees.

They have a multi-chambered stomach with special microbes that break down the cellulose of the plant cell walls. After it has eaten its fill, the mouflon will lie down somewhere, and regurgitate its food, chewing it a second time to soften it some more. It then swallows it again for the last time.

The natural enemies, especially of the lambs, are wolves, foxes, wildcats, and eagles. Other natural predators such as bears, have all but disappeared from the mouflon's range. The mouflon is still hunted for their trophy horns.

Mouflon numbers have declined over the last 50 years due to habitat loss, hunting, and interbreeding with domestic sheep. In 1975, the population in Sardinia dropped to 700, but appears to be making a slow comeback. Corsica has about 200 - 500 mouflon and Cyprus has even less. These island populations are listed as vulnerable by the World Conservation Union (IUCN), which means that there are restrictions on hunting, or trapping. Elsewhere, where mouflon have been introduced, herds are thriving.