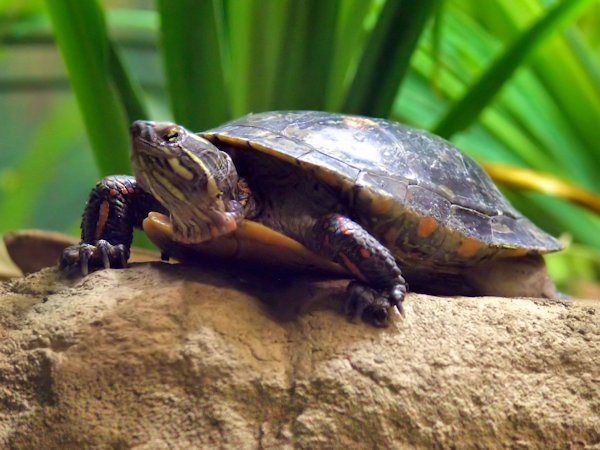 The carapace ( top shell), is olive green with patterns of red, orange and yellow lines around the outer scutes. It is slightly arched, smooth and oval shaped. The large plastron (bottom shell), is yellow to cream coloured with a dark, artistic pattern in the middle. The carapace is joined to the plastron by a wide, yellow bridge at the sides. The head, legs and tail are olive green with yellow stripes. There is sexual dimorphism present with the males being slightly smaller, their tails are longer and thicker, and their cloaca is further down the tail while the female cloaca is at the tail base. The cloaca is the common passageway for urinary, digestion and reproduction ducts. The male claws on the front feet are much longer than the females.

Painted turtles range across North America and are divided into four subspecies.

Chrysemys picta marginata is found south of Sault Ste. Marie in central and south Ontario. It is also found in southern Quebec, south into central USA to Tennessee and northern Alabama, west to the Mississippi River; it extends east into Pennsylvania, West Virginia, Maryland and Virginia.

Painted turtles are sexually mature at five years for males and eight years for females. Both courtship and mating occurs in the water which is 16-24 ˚C. This is between April and May usually. The courtship consists of the male facing the female then slowly stroking her head with his long fore claws. If the female is receptive, she strokes his forelimbs with hers. At times the male swims away, and after more stroking, and swimming away the female sinks to the bottom, the male mounts her and mates.

One to two months later the female looks for a nesting site, often in the afternoon, frequently after a rainstorm. She may dig one or two false (empty) nests before laying eggs in the third. The flask shaped nests, approximately 10cm deep are dug in sandy, loam soil, gravel banks, or in farmers' fields, but not a long distance from water, amid late May to mid July. Three to fourteen elliptical creamy white eggs are laid. These eggs are flexible at first but become firmer as water is absorbed. The eggs hatch in 60-90 days. The sex of the turtles is determined by the nest temperature. The female covers the nest so well, patting down the soil and even covering the site with vegetation, that the nest is hard to locate. It is located in a sunny, open area.

Recent observations indicate that up to 50% of females don't lay eggs each year, especially in northern populations because they must accumulate enough fat to produce the egg yolk. Approximately half the energy for egg production is accumulated by the female in the previous year. The hatchlings, about 25mm in diameter, break open the shell with a tooth-like projection in the upper snout which falls off within a few days of use. The hatchlings dig out of the nest, usually at night, and make their way to water which is reflected by the night sky. Moving at night offers protection from being seen. In northern populations most hatchlings overwinter in the nest and emerge the following year when there will be longer opportunity for growth.

In the first year hatchlings have been observed to form a compact mass each night. These turtles spend so much time in water, they can not only use their lungs for breathing but can absorb oxygen through their skin, the lining of the throat and the cloaca. Since their ribs are attached to the shell they must use their flank and shoulder muscles to expel air from the lungs.
Camouflage is provided not only by the olive green shell but also by the algae which grows on the carapace. The algae is lost annually when the outer layer of scutes (a horny layer) is shed. The carapace is not vaulted thereby enabling water to flow over it without much drag when swimming. When threatened, they can draw their colourful and exposed head, tail and limbs into their shells thereby being less noticeable and protected.

Basking on logs and rocks, a most common activity, allows these ectoderms (cold-blooded) to use the sun to warm their bodies. They can extend their necks and legs for maximum exposure. They bask with the shoreline in view of their excellent colour vision. They have a good sense of smell but not as good hearing. At the first sign of danger, these turtles dive to the bottom of the pond. Basking is often done for five - six hours a day, often in two periods, with feeding in between. Larger painted turtles bask for longer times. If basking sites are limited, these turtles share basking logs and have been seen climbing on top of one another. When the pile gets too heavy the bottom turtle raises its back legs to rock the top turtle off. In addition, basking helps rid the turtles of leeches.

C. picta marginata have been seen actively lunging at submerged thick vegetation which scares out small animals who had been hiding there. The northern populations have a more carnivorous diet which allows them to grow faster when the growing season is shorter. As well, a study found that after maturity their diet was more herbivorous (vegetables and plants).

In temperatures below 15 ˚C these turtles stop eating but remain active. They can tolerate cold better than other species but do hibernate for part of the winter (from one to four months). They require a pond which has at least one metre of water with a thick, soft bottom so the turtles can burrow down at least 45cm into the mud. During warm spells, they have been seen swimming under the thinning ice.

Since C. picta marginata must find a nesting site on land, they are sometimes killed by vehicles when they cross roads. Hatchlings are drawn to brightly reflective surfaces which may not be water but rather parking lots and roads. As well, human pressures such as agriculture, towns, cities and roads destroy habitats. Pollution of streams from human activity may cause death.
Skunks and raccoons feed on eggs and juveniles. Fish, birds, snakes, otters, and frogs are also predators of the juveniles. Under the Ontario Fish and Wildlife Conservation Act, (1997) it is illegal to collect native animals without proper permits.