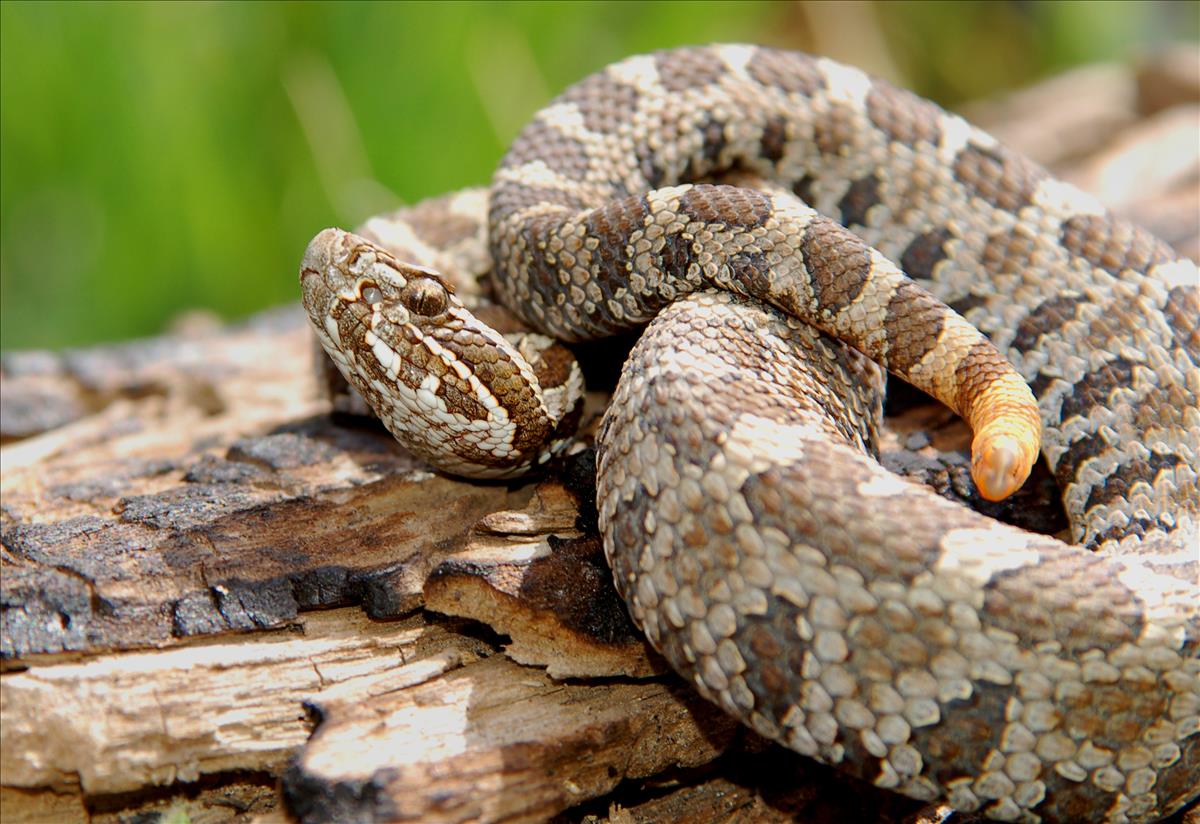 The massasauga rattlesnake is a medium sized, dark coloured, pygmy rattlesnake with 29 to 50 dark dorsal blotches on its grey or brownish grey body. There are three rows of smaller dark spots on each side of the body. The head is thick and triangular with black stripes; the belly is black and irregularly marked with white or yellowish spots. The head of the massassauga is covered at the crown, in nine plates, which is a trait only shared with other pygmy and nonpoisonous snakes. The pupils of its eyes are elliptical. The most distinguishable feature of this snake is the stubby rattle on the end of its tail. This rattle is composed of loosely attached horny segments that strike against each other to produce a buzzing sound when the tail is vibrated rapidly. This rattle is represented in very young snakes by a "button". A new segment is added each time the skin is shed (about three to four times per year); the segments become increasingly larger until the snake reaches adult size. It is interesting to note that some other Ontario snakes such as the Milk and Fox snakes will also vibrate their tails but they do not possess rattles. The rattle of the massassauga best resembles either escaping steam from a kettle or of cicadas.

From western New York and southern Ontario, to eastern Iowa and extreme eastern Missouri. Interestingly, rattlesnakes are only found in the New World.

They prefer low lying, poorly drained meadows and adjacent old fields. Generally includes a wintering area of low woods, bogs, fens or marshes and a summering area of drier ground, usually grassy with low shrubs. They hibernate during winter alone in holes in the ground, which is different from many snakes which prefer to be in a group.

Mostly small mammals such as mice, but will also eat small birds, other snakes and amphibians.

Mating takes place in spring following emergence from hibernation. Females that have mature eggs in their oviducts release a pheromone (chemical signal) indicating that they are ready to mate upon molting of the skin. Male and female separate after mating and resume their normal activities independently. Like most reptiles, they are polygamous. Sexual maturity is reached at three or four years of age. Pregnant females feed very little if at all and live primarily off their fat reserves throughout gestation. They will feed ravenously following birth. Massasauga rattlers are ovoviviparous (unshelled eggs develop in the body of the parent and hatch within or immediately after being expelled). The female produces large, yolk filled eggs which are retained within her reproductive tract for the gestation period of two to four months depending on the time she spends basking in the sun. The developing embryo receives no nourishment from the female, only from the yolk. Young are born in a thin, clear membrane and break out immediately after birth. Some eggs hatch inside the female and the young are born "live" at which time they are immediately on their own. There is no maternal care at all but young usually remain in the vicinity of the female for a week before dispersing. When born, the young average 22 cm in length, weigh 8.5 to 17 grams and are equipped with fangs and venom. They will shed skin for the first time within 10 to 15 days of birth. Adult length varies between 0.6 and 0.9 metres.

This rattlesnake has a pair of large, hollow fangs at the front of the mouth that are connected to the bones of the upper jaw and palate so that they are folded against the roof of the mouth when it is closed. These fangs are automatically brought forward and down when the mouth is opened and are used to inject venom into their prey. The poison is hemolytic (causes the breakdown of the red blood cells) in the bitten animal which it eventually subdues, and even partially digests it, enabling the snake to withdraw from the dangers of the sharp toothed prey, and then return and swallow it. Their digestive juices allow it to digest bones and fur. Adult massasaugas exhibit a fairly sedentary life style moving approximately nine metres each day. Adults display crepuscular or nocturnal activity and foraging patterns, while juveniles tend to be active throughout the day (diurnal) provided it is not too hot. They can live 18 years or more in the wild. Their pattern is cryptic and the snake is not easily seen when at rest. Like all "pit" vipers, they have heat sensitive pits on each side of the snout. They use these pits along with smell for direction when eyesight is limited (at night).

Loss of wetlands and other special habitats required by the massasauga and indiscriminate killings by people who fear it, are threatening the existence of this rather shy rattlesnake. It would much prefer to avoid humans and will rattle its tail loudly as a warning rather than strike. Populations of massasauga rattlesnakes in Ontario are isolated to four regions; a narrow 25 km strip along the eastern shores of Georgian Bay and north of Honey Harbour as far as Sudbury and on a few islands in the bay, the Bruce Peninsula, north of Wiarton on the western shore of Georgian Bay, in the Wainfleet Bog and in the Windsor area. There is no mixing between the groups which is a sure sign of decline and possible extirpation unless the trend is reversed.