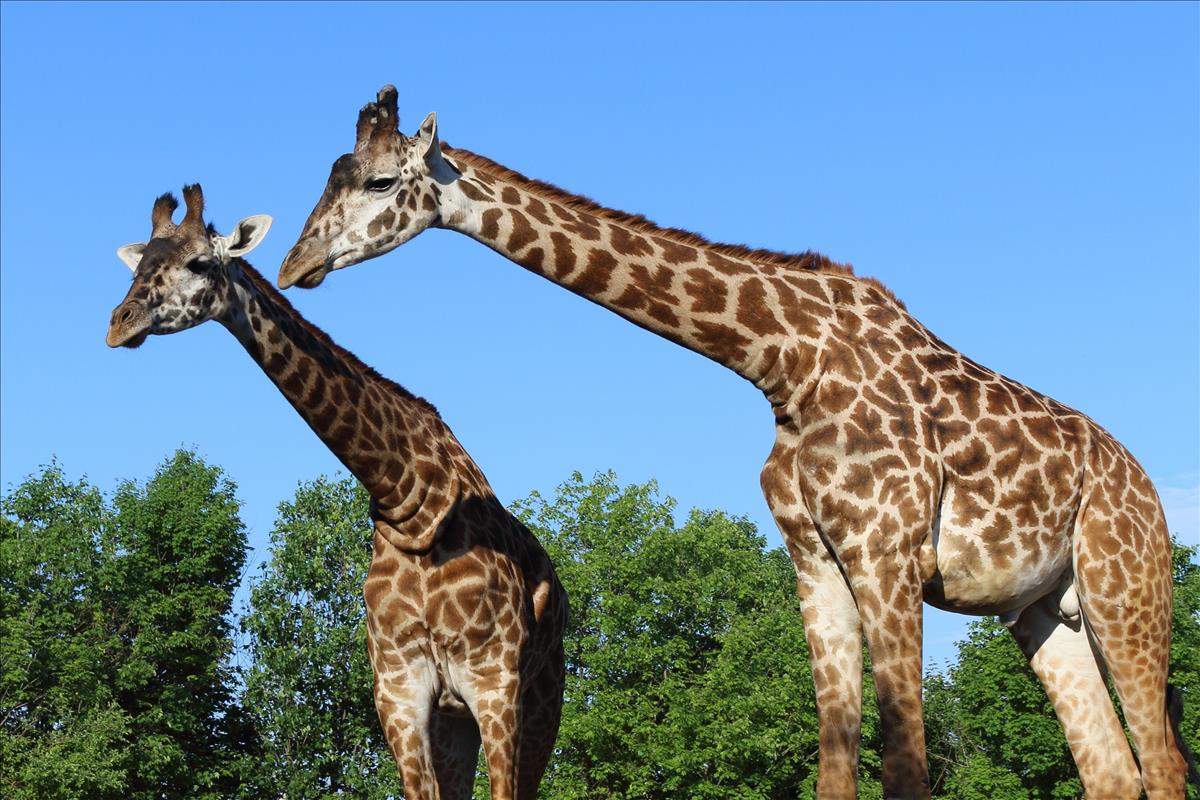 The giraffe is the tallest animal in the world. These majestic animals have elongated necks, shoulders and skulls, steeply sloping backs and long stick-like legs with large heavy feet and a long thin tail with a tuft of long thick hairs, useful to flick off the flies. Their bodies are covered with a thick hide, sporting a pattern of splotches ranging in colour from a yellowish/tan to dark brown or almost black. The Masai giraffe has a very irregular pattern of fuzzy-edged splotches. The pattern never changes, but may vary in colour depending on age or season, darkening as the animal gets older. Their ears are large, as are their dark brown eyes which are shaded by long, elegant eyelashes. They can close their nostrils at will. Their lobed canine teeth are used as combs to strip off the leaves from trees. Their thin lips are very mobile, and the incredible flexible tongue can measure up to 45 cm in length. It is blue/black in colour.

Two short, skin covered horns are permanent and present in both sexes, although they are better developed in males. These ossicones are formed as cartilage and turn to bone from the tips downward. Males have horns that are thick and bald on top, while females have thinner, tufted horns. The giraffe also bears a smaller horn on the forepart of the frontal bones, situated more or less between the eyes. The neck is 1.5 m or more in length with seven vertebrae, typical of most mammals. The vertebrae are elongated and are attached to one another by a ball and socket joint, which makes the neck flexible. The heart is massive, weighing 11.5 kg and pumping approximately 60 liters of blood per minute.

They range in height from 3.8 to 5.5 m. They can weigh up to two tonnes. Generally males are taller than females.

Giraffes are found throughout sub-Saharan Africa. Masai giraffe are found in the southern half of Kenya and Tanzania.

Giraffes browse high in the trees - higher than any other animal. They prefer the leaves and twigs of the acacia trees, mimosa, and wild apricots, but will eat other vegetation. They feed and drink mainly in the evening. They are often seen to be chewing their cuds, since they are ruminants with four chambered stomachs. Giraffes get most of the water they need from their food, and need to drink only once every couple of days.

Bull giraffes compete to mate with the cows. They do this by "necking" or wrestling using their heads and necks to test each other's strengths. This mainly occurs amongst the young bulls, or when there is a new bull in the area. Generally only the high-standing males are permitted to mate. In some parts of Africa, such as Zambia, breeding may occur throughout the year. However, the young tend to be born in the dry months between May and August. During mating season, the male giraffe nudges the females behind to induce urination. He then tastes the urine to see if the female is in heat.

Giraffes are sexually mature at three to five years old. Females come into heat every 12 - 15 days and give birth approximately every two years. The average gestation period is 457 days. The number of offspring is almost always one, though twins are known to occur. Birth takes place with the female standing so the calf has almost two metres to fall to the ground. At birth the young weigh 47 - 70 kg and are already 1.7 - 2.0 m in height. They are born with their horns, which gradually turn to their upright positions. The young are able to stand on their wobbly legs about 20 minutes after birth and begin to suckle within the hour. The calf may nurse for up to 13 months, but at two to three weeks the calf begins to supplement its milk diet with leaves. The calf grows rapidly in the first year (about one metre) and growth continues until full size is attained at about five years for females and seven years for males. The young stay with their mother for about a year and a half. Females are capable of reproducing until at least 20 years of age. Life spans in the wild reach up to 25 years; in captivity they can live to be over 30 years of age.

The senses of smell, hearing and vision are acute. However, among the African big game species, the giraffe is believed to have the keenest eyesight, and its height gives it the greatest range of vision. Their very long necks are an adaptation to feeding at high levels in the treetops. Their prehensile tongues allow them to draw their food into their mouths, and their specialized teeth can remove the leaves and buds. This allows them to get past the long thorns on the acacia trees and get to the succulent leaves that they want to eat. Their saliva contains an antiseptic to help heal any wounds that the thorns might cause to their tongues.

Their hearts are adapted to be able to pump blood under great pressure to the brain when the animal is upright, but when the animal is bent to drink, special valves and neck veins (rete mirabile) regulate blood flow to prevent brain damage or black outs. In order to drink or pick up food from the ground, the giraffe spreads its forelegs far apart and well to the front or bends at the knee until its head can reach the ground. In less than two seconds they can regain their upright position. While standing quietly, the neck is usually 50 - 60 degrees to the ground, but when they are angry or annoyed, the head and neck are lowered to almost a horizontal position.

Giraffes are good jumpers, but cannot swim. They can run for long distances without tiring and can travel up to 56 km/h. While a giraffe is running, the hind feet are swung forward of the forefeet, the head and neck swing widely, almost in a figure eight, and the tail is raised over the back. However, when walking, the giraffe carries both feet on a side forward simultaneously. They move directly from a walk to a gallop. When one giraffe is seen running, this provides a signal to other animals that there may be danger and all take flight.

They rest in a standing position, although when secure or young, they do sit for short periods. They sleep for only a few minutes at a time. Their legs are strong enough to kill a lion with a well-placed kick. Giraffes are non territorial and home ranges of different groups tend to overlap so that there may be up to twenty-five individuals in one area. The groupings change continually, but hierarchy within a group of males is established by necking, or neck wrestling. The male has an extra reinforcing bone over his skull to protect him when "necking" with other males. Each of the nine subspecies of giraffe has a different pattern of splotches, but the individual giraffe within the group will have its own pattern for life - like a fingerprint. It may be a way for them to recognise individuals. Giraffes do vocalize, communicating with moaning or snorting noises, especially as a warning of danger. Females may bellow to locate their calf.

The primary threat to giraffes is habitat loss as a result of the expanding human population. Within the National Parks, poaching is a serious threat. Jewelry and fly swatters are made from the tail hairs. Whips, sandals, shields, and drums are made from the hide and strings for musical instruments. Bowstrings and thread are made from the tendons of the leg muscles. Natural predators include lions, leopards, hyenas, and sometimes crocodiles, which prey on giraffe when they are most vulnerable - when they are drinking.