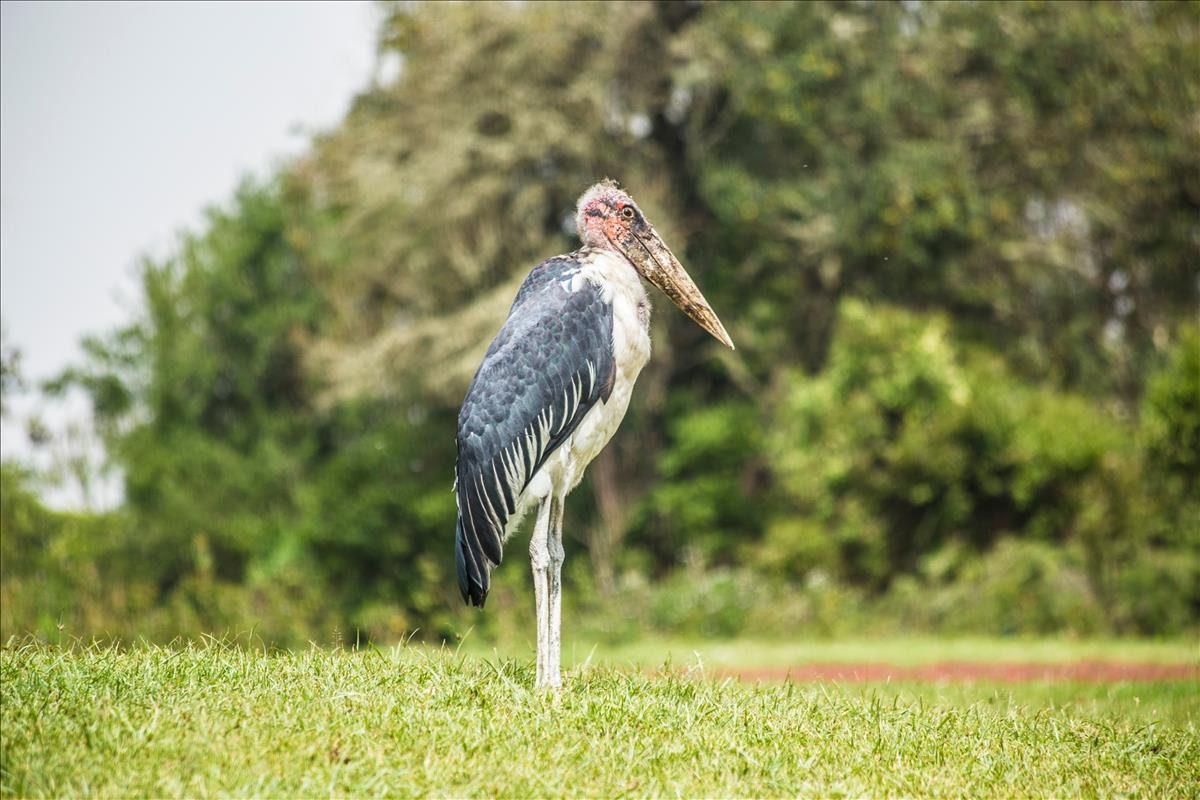 The marabou stork’s orange-red head has black spots that are concentrated towards the forehead and base of the bill. They also dot the gular sac that hangs down anywhere from 25 to 35 cm when inflated. At the base of the nape there is another air sac, crimson in colour, with a diameter of 10 to 15 cm that can inflate to seven cm high. It is usually hidden by the white ruff that encircles much of the lower neck. A few sparse hairlike feathers are scattered over the crown and neck. The neck and gular sac are pink or magenta. The outsized bill ranges from horn-colored to greenish yellow. Eyes are grayish brown.

This bird is also referred to as the “undertaker bird”, the name originates from its cloaked appearance when viewed from behind as well as its hunched head, tufts of white hair on the nape, and long, skinny legs. A ladder of white bands forms on the edges of the cloak, the greater secondary coverts. The wings, back and tail are a slaty grey. The wings are glossed with green while the back and mantle are glossed with blue. This contrasts with the thick, downy, off-white feathering of the underparts. The legs and feet appear to be white because of excrement. The actual colour is dark grey. Females are slightly smaller than males. Juveniles have wooly down on their head, black plumage and a smaller bill.

The breeding season is the height of this stork’s attractiveness. The white undertail coverts elongate into a fluffy flamboyancy (lepto translates from Greek as fine; ptilos as feather). The nape turns a pale blue-green. The face and forehead become blackish red.

Prefers arid and semi-arid expanses of savanna and grassland. However it must be within flying range of an aquatic habitat such as a swamp, lakeshore, riverbank, or receding pool where fish are stranded. Human settlements are enticing for their dumps and slaughterhouses. Fishing villages provide fish scraps.

In the equatorial zone, breeding may take place at any time because of the variability of rainfall. In the rest of the tropics, the dry season is favoured because, with water levels lower, fish and frogs are easier to catch. As breeding time nears, the male establishes a territory. Its gular sac is inflated as a courtship display and a show of dominance and hostility to intruders. A female, seeking a mate, will be submissive. She demonstrates this with a “balancing display”, her body horizontal, neck extended and bowed downward, wings spread. If she’s persistent enough, the male will accept her and she’ll inflate her pouch, again a sign of dominance to other marabous in the vicinity. Whenever one of the pair returns to the nest, an “up-down display” is performed: wings are held away from the sides and the head is pumped. The male gathers most of the sticks for a nest 10 to 30 metres off the ground, lining it with twigs and green leaves. In towns, they might use a building. A food source needs to be within reasonable flying distance, approximately 50 kilometres. The same sites are used for many years. Interspersed with nest building are displays of bill rattling and frequent copulation.

Two or three eggs are laid at one to three-day intervals and incubated for 29 to 31 days. At birth, hatchlings weigh about 70 grams and have wrinkled, pinkish skin sparsely feathered with pale-grey down. Parents share in the brooding for the first 10 days. After that, they stay at the nest or nearby until the chicks are almost full-grown. They do provide protection from rain, cold and sun. To feed the young, the parents regurgitate fish into the nest, supplying the calcium needed in this period of rapid growth. Smaller vertebrates are also provided whole. The nestling uses a begging display; kneeling on its tarsi, wings partially open, and nodding their head.

From days 8 to 35, white down thickens over the entire body except in those upper areas that remain bare into adulthood. Growth has been rapid to this point, but slows as more energy goes into feather development. From days 35 to 50, black contour feathers grow in (the outer layer of feathers that give a bird it characteristic shape). By day 66, full adult plumage is achieved. Around day 17, the young bird starts to flap its wings. The ability to hover over the nest takes until day 66 when adult plumage is complete. A month later, around day 95, it takes short flights within the tree. Flights beyond the tree begin around days 110 to 115. Beyond day 130, independence is achieved.

Marabous start breeding at the age of four, but don’t breed every year and success is fairly low. One egg in three makes it to the fledgling stage. One in four fledglings survives long enough to breed. The Marabou stork has been known to live as long as 25 years.

Leptoptilos crumeniferus needs to find from 700 to 1000 grams of food every day. As a scavenger, it soars over open country searching out vultures that lead it to carrion. When the vultures have torn up a carcass, the marabou steals in to pirate what it can. It will hang around dumps, slaughterhouses and fishing villages looking for scraps. With its massive bill and elastic stomach, it can swallow a 600-gram piece of meat. Despite its size, the bill is sensitive and is used in a hunting technique called groping or tactolocation. Bill partially open, the marabou dips it in shallow water and starts to wade. When prey is contacted, the bill snaps shut and, with a throw of the head, the marabou swallows its catch. If water visibility is good, it can seize a fish with the bill’s tip. It also hangs around large mammals, nabbing insects they stir up. At grass fires, it finds insects and small vertebrates flushed out by the flames. Locusts and termite swarms are other attractions. The stomach contents of one marabou revealed almost 1000 locusts.

Though the marabou stork looks heavy when getting airborne, it flies strongly with rhythmic flaps that make a noisy “woofing” on takeoff and landing. A wide wingspan enables it to soar to heights of almost 4000 metres. In flight, a partially retracted neck puts some of the bill’s weight on the shoulders. The bill angles down slightly as do the legs, which trail out well beyond the tail.

When it walks about with the gular sac inflated, other marabous take this as a sign of dominance and get out of the way. The sac also acts as a thermoregulator to cool the marabou down. The air sac on the nape also performs this function. The gular sac connects to the left nostril and functions as a resonator to produce a guttural croaking during social displays. This makes up for its lack of a syrinx (vocal organ). During displays for breeding and nesting, it claps the mandibles together rapidly, called “bill clattering”. This is also done if they feel threatened.

Marabous gather in late afternoon in communal roosts of up to 1000, though it’s more commonly 40 to 120. In the morning, they won't depart for several hours as they wait for thermals to develop. During rainy season or shortages of food or water, they may make a short migration. They are capable of flying 50 kilometres in search of carrion.

On its long, gangly legs, the marabou walks hunched over. Often it kneels on its tarsi. Sitting or standing, it likes to spread its wings to catch the sun, a practice that is contagious in a flock. The marabou’s dark legs are stained white because it squirts excrement onto them. This is done for the evaporative-cooling effect, called urohidrosis.

Human’s negative influences: As wetlands, marshes and swamps continue to dry up, usually because of peoples’ actions; this bird and others are put in jeopardy. Overhunting of large mammals for food translates into less carrion available to scavengers, which soon reduces their populations. Since marabou storks are quite tame, locals often take them as pets. Proximity to people also makes them easy pickings for would-be diners though their appearance and eating habits repel many hunters. They are often used in traditional medicines.

Positive influences: An increasing number of dumps due to greater urbanization provide scavengers with an increasing amount of food, which has expanded the marabou population. Protected areas are increasing across its large range. Carrion eaters help prevent the spread of disease by cleaning up infected carcasses.