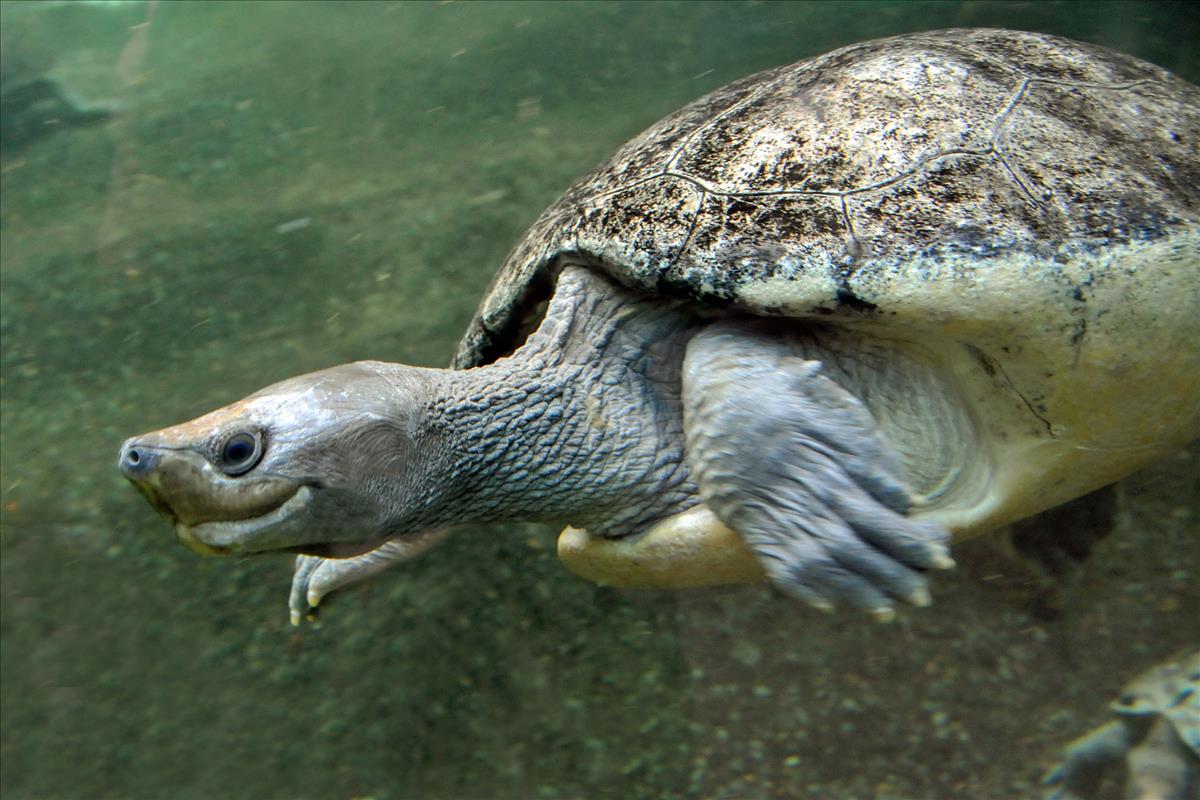 This is a medium-sized to large freshwater chelonian. Length of carapace: up to 75 cm (most commonly less than 60 cm). This is one of the largest turtles in the emydidae family. The oval carapace is rather flattened and has scutes roughened with growth annuli. The adult carapace is light brown to olive with three broad, black longitudinal stripes. The plastron is well developed but smaller than the shell opening and has only a shallow posterior notch. The bridge is broad and the plastron is extensively sutured to the carapace. Both the bridge and the plastron are uniformly yellow or cream coloured. The head is small to moderate in size with an upturned, pointed, projecting snout and a shallow medial notch on the lower jaw. The head of the female is olive and that of non-breeding males is charcoal gray. During the mating season the male’s head becomes white and a red stripe develops between the eyes (hence the common name “painted”). The back of the head is covered with small scales; the sides of the jaw are serrated. The limbs have enlarged transverse scales. There are five claws on the forefeet and all toes are heavily webbed. Limbs and other soft parts are normally olive to gray. Males are shorter than the females and have longer, thicker tails.

Found in southeast Asia in Malaysia, Thailand, Sumatra and Borneo. They are widely distributed in Malaysia, although, few large populations remain and are almost extinct in Thailand.

Adults live mainly in the estuaries and tidal reaches of medium to large rivers. They also inhabit mangrove swamps. Juveniles are less tolerant of sea water so usually inhabit the freshwater portions of these rivers.

They are generally herbivorous, feeding on the leaves, seeds and fruits of riverside plants.

During the breeding season females migrate down-river and lay eggs on sandy beaches a few kilometres from the mouth of their home river. Nesting is from June to August. The female emerges from the sea, selects a site and then rapidly digs a 30-cm-deep hole on a sea beach. She then lays her eggs, covers them and returns to the sea. It occurs at night at low tide with an average clutch size of 10 to 12 eggs. In mangrove swamps, where no beaches occur, the sand banks of the river are used for nest sites. Eggs are ellipsoidal, 68-76 mm x 36-44 mm with brittle shells. Hatchlings are rounder with dark spots on each vertebral scute and one on the posterior border of each pleural scute. They are grey all over.

Hatchlings can survive for at least two weeks in 100% sea water. This allows them enough time to make the migration from their sea-beach nests, some of which may be as far as 3 km from the mouth of a river, to fresh water. Adults show marked sexual dimorphism, with females being larger than males.

Habitat destruction is a major source of species decline; sand mining, beach protection and beachfront development all disrupt the breeding habits of turtles. This species is now rare throughout much of its former range, with only one or two rivers home to more than 100 nesting females. They are massively exploited for their eggs, which are sold for human consumption in many parts of Asia. Eggs are worth five times as much as chicken eggs, and this species is particularly vulnerable to over-exploitation due to its low egg productivity. Their predictable patterns of feeding and nesting have made them vulnerable to collection for food markets.