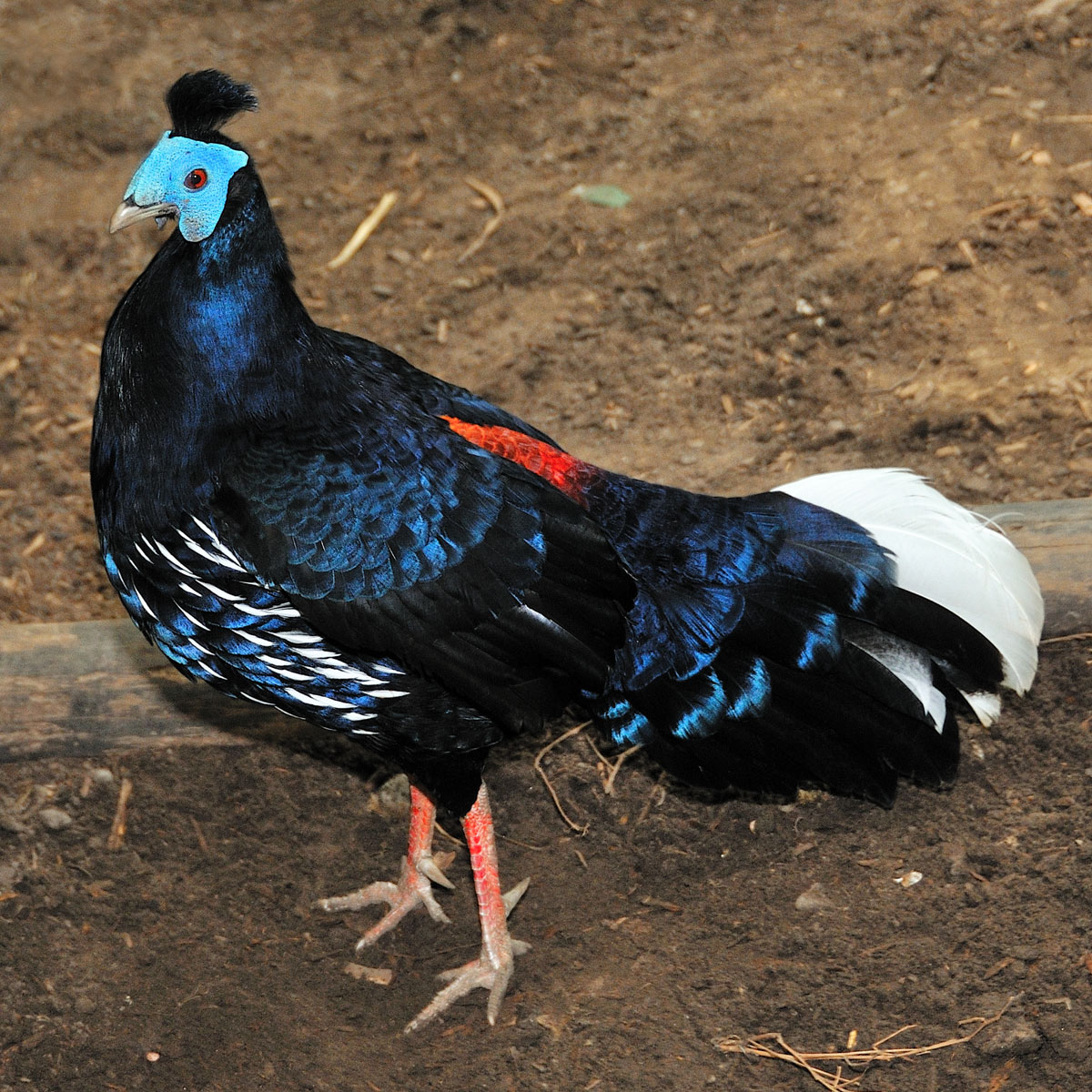 The crested fireback is a medium sized forest pheasant. The male measures from 65 to 70 cm weighing between 1812 and 2605 g. The female is somewhat smaller at 57 cm weighing up to 1600 g. They have distinctive crests and impressive facial decorations that play an important role in courtship displays. The male has a vivid blue facial skin and wattle, a bushy black crest and dark, purplish blue plumage with a reddish brown rump and a deep red lower back. The tail is white with black outer feathers. The female is a brown bird with spotted black and white flanks. It also has blue facial skin but a brown, somewhat shorter crest.

They inhabit primarily old growth forests often near rivers and streams but have also been recorded in logged, disturbed, and secondary forests ranging from lowland locations up to 1000 m above sea level. They are not known to inhabit swamp forests.

Their diet consists mostly of leaves, plants, seeds, fruits such as figs, and a variety of insects.

Despite its relatively wide distribution, little is known about the breeding habits of this pheasant. Creamy white eggs have been found between April and July (in Indonesia); clutch size between four and eight eggs. The incubation period is estimated to be 24 days. The chicks resemble the female in colour but with black spots on the upper wing coverts. The male tends to be darker than the female and starts assuming a dull version of the adult plumage when four months old. It attains full adult male plumage after one year but does not mature fully until into its third year.

The crested fireback pheasant is quite a shy bird, not easily found or observed. It is suggested that it is fairly mobile within a defined area using different parts every few days. It communicates with a croaking call, followed by a shrill chirp.

Populations may well total over 100,000 individuals but is it is suspected that these numbers are declining continuously. Lowland forest habitats are being severely threatened by agricultural development, cash crop plantations, and logging. In addition, this colourful pheasant is being hunted for food and sport. They can tolerate selective logging: as they have been observed in logged and secondary forests but the limit for their accepting habitat alterations is not known. They are now endangered in peninsular Malaysia and Thailand. Their numbers seem to have stabilized in Indonesia, however; they are not protected by Indonesian law.