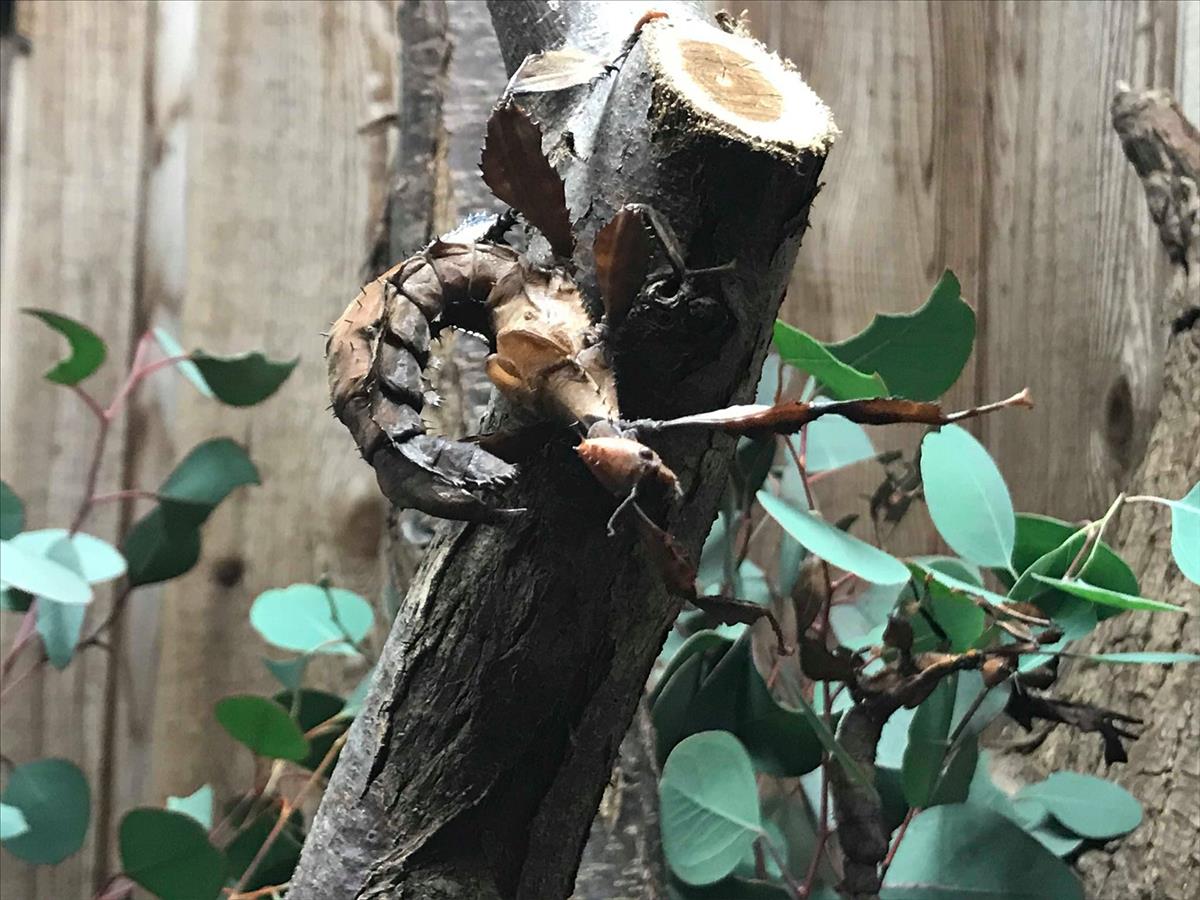 This species belongs to a family of insects commonly referred to as "phasmids". This name is derived from a Greek word meaning "apparition" and is comprised of stick and leaf insects. They very much resemble dried leaves or twigs. Exatosoma is a large, slow-moving, stick insect. Both males and females have wings; possess biting mouthparts and large, compound eyes. Tiny spines cover the head, body, and legs and leaf-like appendages extend from the legs and abdomen. Colouration varies according to temperature, food and humidity but they are usually a pale tan colour. They can be brown, mottled brown, dun, green, a reddish color, a cream color, a yellowish color, and even entirely white.

Sexual dimorphism is well defined. Females are thicker and longer than males and cannot fly. Their wings are quite small. Males have slender, long wings and fly quite well. The abdomen of the male has a smooth area. The female abdomen is spinier. Female acquire their distinctive spiky appearance as they go through additional moults.

The average weight of females is 25 grams. Males are less than half this weight. The average length of the females is 15 cm and the males 10 cm.

E. tiaratum are phytophagous or leaf-eating. They are strictly vegetarian, feeding on leaves, including eucalyptus.

E. tiaratum typically reproduce through sexual reproduction and produce eggs that hatch four months later. When no males are present in the population, this stick insect exhibits parthenogenesis instead. Eggs laid without fertilization take up to nine months to hatch and produce only females. In either case, the female "flicks" her eggs, swinging her tail to drop/throw her eggs to land on the forest floor.

One generation is produced each year. Eggs are hard and seed-like, about five mm long, shiny and either cream or brown-coloured. Nymphs are black with an orange head and whitish collar and feed mainly on understory shrubs. Colour and behaviour of the nymph changes within 24 hours of hatching. They are very active in the early stages of growth. Their locomotion slows when they moult into their second and subsequent instars.

The outside material of E. tiaratum eggs consists of lipids and other organic compounds that ants identify as food. They carry these eggs to their colony, consume the edible outer portion, and dump the intact eggs into their waste piles. Newly-hatched nymphs are ant mimics and resemble the insects in whose nest they are born. Their aposematic pattern—orange head, white collar, and the rest black—mimics the ant genus Leptomyrmex and makes them appear toxic.
Camouflage in adults is incredibly adapted to mimicking dried leaves or twigs.

The thorn-like spikes are used for both defense and camouflage. Both genders, when threatened, stand on the front and middle legs, pointing their abdomen up or to the side. They fold back their legs to defend themselves if anything comes in contact with their abdomen. Females can curl their tail over their body and snap their back legs in a position of defense or "scorpion posture". They also take a curved pose when hanging inverted amongst foliage with their highly procryptic abdomen curled over its back. Like many stick insects, E. tiaratum sway back and forth or side to side when disturbed. They also move this way to blend with foliage rustling in the wind. While they are harmless, they are very prickly to touch. Adult males can release a defensive odor that humans might not find offensive as it "is rather reminiscent of peanut butter or toffee".

Natural predators such as birds and reptiles.