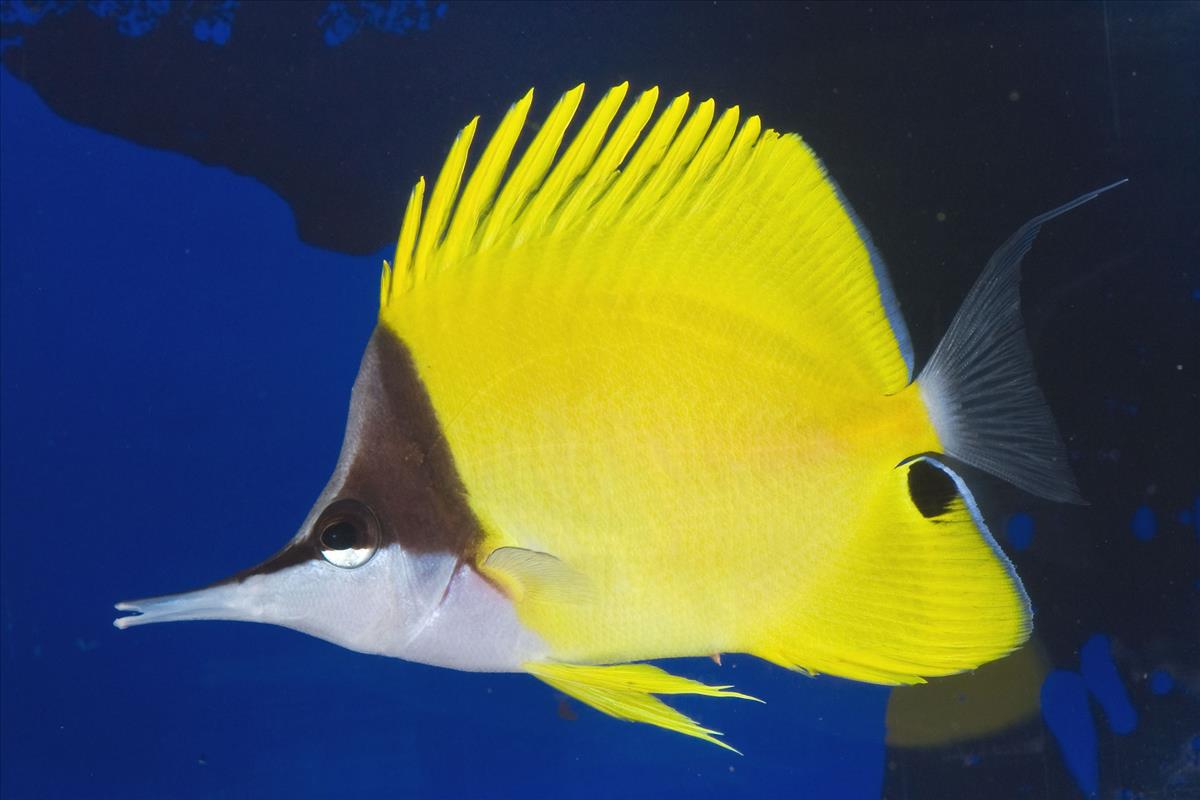 The longnose butterflyfish has a bright yellow body, adorned with a black eye-spot on the anal fin (close to the caudal peduncle). The body is compressed. Directly behind the pectoral fin is a lighter, white area. The snout of the long nose butterfly is quite long. It is thin, and the mouth opening is quite small. The color of its head is divided horizontally. The upper half, at the very top of the mouth through the top of the head, is black. The lower half is silvery white. The dorsal spines are long and jagged. Over the eye, you can see a disruptive black bar. These fish can reach up to 18 to 23 centimetres in length.

It is found in many places around the world: Indo-Pacific, Red Sea and East Africa to the Hawaiian and Easter islands, north to southern Japan, south to Lord Howe Island; throughout Micronesia. Eastern Pacific: southern Baja California, Mexico and from the Revillagigedo and Galapagos Islands.

Found at depths between 1 and 30 metres, in areas with abundant corals; as it picks in between coral heads with its long snout.

These fish feed on small invertebrates, plankton, fish eggs, and various other items that they find scavenging in tiny cracks or crevices of coral reefs.

They are pelagic spawners which means they gather in groups in areas where the fertilized eggs will be taken by the currents. The eggs float in the epipelagic zone (sunlit zone near the ocean surface) until the larvae hatch. The larvae live in the plankton layer up to two months. When they reach a certain size, they swim down at night to a reef and join that ecosystem. While floating around, larvae are covered in bony armor, often with serrated or saw-like spines sticking out.

The long nose, which gives the longnose butterflyfish its name, aids it in the search for food.

Pollution of water, destruction of reefs, and collection for the aquarium trade.