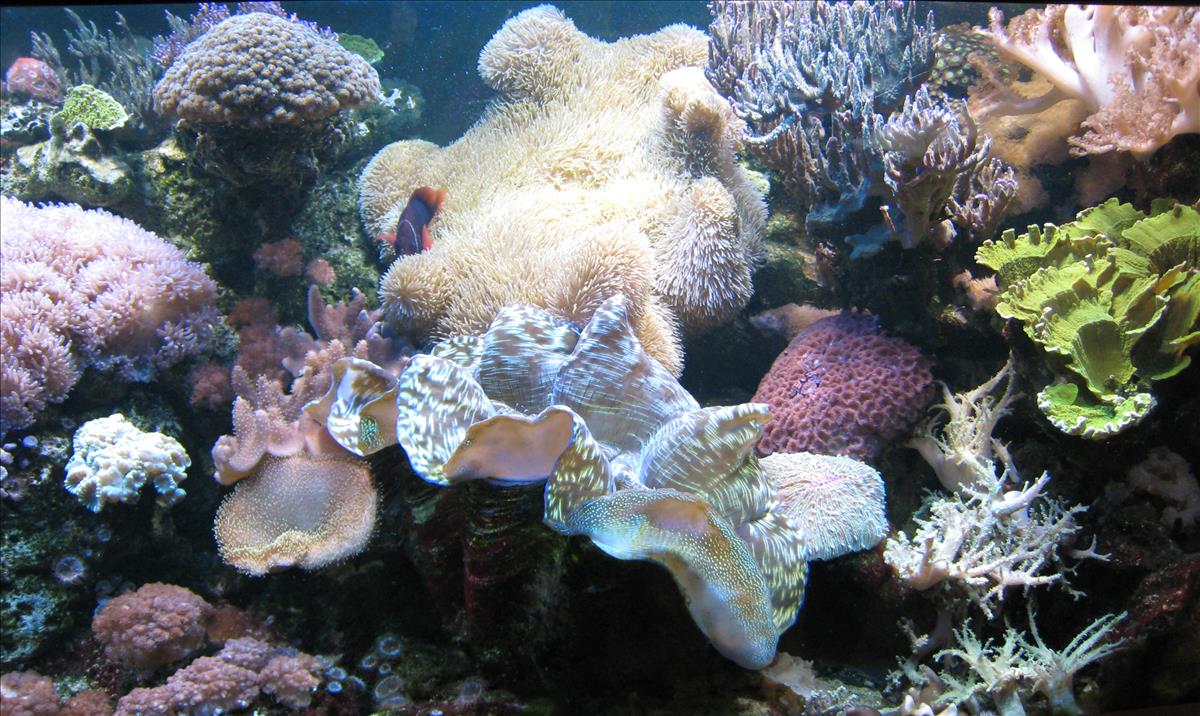 Corals have radial symmetry. The polyp is a small tubular sac with three tissue layers. The mouth is at one end surrounded by tentacles (8 for soft corals and multiples of 6 for stony corals). The opposite end or base is attached to a hard surface such as a smooth rock or dead coral. Both food and waste move through the mouth. Respiration occurs through the body surface. Tentacles contain stinging nematocysts that are long curled threads with a barbed end. When a tiny sensor outside the nematocyst is stimulated physically or chemically, the venom filled thread inside explodes and injects venom into the victim. Corals have no brain. A simple nervous system called a nerve net extends from the mouth to the tentacles. Chemoreceptor cells can detect sugars and amino acids which enable the coral to detect prey.

In reef builders the mouth leads to a stomach cavity with long, partitions called mesenteries which provide increased surface for digestion. Long mobile filaments extend from the mesenteries through the mouth to capture food. These filaments also contain germ cells.

Stony corals secrete a cup around the polyp of calcium carbonate which forms the exoskeleton. Polyps may divide to form a colony, but each polyp maintains a connection through the stomach withits neighbor. Each polyp can withdraw almost completely into its protective cup. Natural pigments in the tissue of some species range from white, orange, red, yellow, green, blue, and purple. In others, the zooanthellae are so numerous within the coral tissue that they give the coral a greenish-brown appearance.

Soft corals lack the limestone exoskeleton. Instead there are internal clumps of calcium carbonate spicules throughout the tissue for support. These corals produce terpenoids and other toxins that prevent algae, worms, and barnacles from living on them. These chemicals also kill nearby organisms that might block sunlight. Soft corals are often brilliant red or orange.

Corals make up a huge collection of varied species, but can generally be divided into two types: reef builders and non-reef builders.

Stony corals or reef builders are found in clear warm shallow oceans. These waters are found mainly between 30 degrees N and 30 degrees S in the western Atlantic and Indo Pacific Oceans. Colder currents on the western coasts of continents prevent reef growth. Most of the over 4,000 species are in the Indo Pacific Ocean. Australia’s Great Barrier Reef with over 400 species of corals (350 of these being hard coral species, with many more soft corals yet to be described and studied) is a World Heritage site and runs more than 2,000km (1,240 miles).

Soft corals are found wherever there are reefs, but they are not limited to warm waters and even occur in Antarctica. They make up about 37% of the Great Barrier Reef and usually are the first to colonize new areas.

Corals have been found in Cambrian rocks that are over 570 million years old. These early corals disappeared during periods of world wide extinction. Most of today’s corals arose since the dinosaur extinction and date back 20 to 50 million years.

Stony corals need sunlight, warm ocean temperatures, currents, and a hard surface to attach to. Because the main energy source of these corals is a symbiotic relationship between the coral polyp and the algae, zooanthellae, they need bright sunlight and are found no deeper than 46m (150feet). They grow faster in clear water that lets more light through. These corals also require water temperatures between 20-28 C (62-82 F). A few species in the Red Sea are known to survive 38 C water, but usually waters that warm cause coral bleaching in which the symbiotic algae are expelled. Unless the temperature cools down or the coral can attract another algal species, it will die. Strong waves help corals by carrying food, nutrients, and oxygen. Waves also distribute the planulae larvae and help prevent sedimentation.

Coral polyps are sessile (attached at the base) filter feeders of zooplankton, small fish, and organic debris. At night they extend their tentacles to capture food with their nematocysts. Soft corals may also feed during the day.

In general oceans are nutrient poor. The main energy source of these corals is the symbiotic zooanthellae that live in the coral tissue and use sunlight to photosynthesize oxygen and sugars. The coral uses these energy sources and produces carbon dioxide and ammonia wastes for the zooanthellae. This relationship is so successful that some species are able to grow 20cm (8 inches) per year. Other reef animals such as soft corals, anemones, giant clams, and sponges share this symbiosis. Coral species lacking these algae feed on plankton alone, grow very slowly, and are found in deeper water and dark caves.

Coral reproduction is both sexual and asexual. Some species are both male and female in the same individual (hermaphrodites), while others are male or female. Both sexes may occur in colonies or a colony may be only one sex.

a) In stony corals germ cells are borne on mesenteries that radiate from the endoderm. When fertilization is internal, eggs are brooded within the polyp for days to weeks. Eventually free swimming planula larvae are released. Usually within hours, the larvae swim down and settle on a hard surface where they develop into the founder or parent polyp which begins to form a colony. In external fertilization, sperm and eggs are broadcast. The fertilized eggs drift upward toward the light and develop in the plankton. Survivors in hours or weeks develop into planulae larvae and also settle on a hard surface. In stony corals the symbiotic algae are transmitted to the egg by the parents.

b) Most soft corals are male or female, form large colonies, produce large numbers of gametes, and broadcast their eggs and sperm. Broadcasting is more efficient in terms of the number of larvae produced. The larvae are in the water longer and suffer more predation, but there is a better chance of them being carried farther from the parent colony. This is why soft corals usually reach new areas first and are found all over the world whereas brooded larvae usually settle close to the parent colony. Soft coral planulae larvae settle down after several days. They obtain the symbiotic zooanthellae through the mouth at this time. When eggs and sperm are broadcast, spawning is often synchronized and usually occurs once a year shortly after a full moon.

Both corals also exhibit asexual reproduction. This occurs when the founding or parent polyp begins to produce new polyps by budding. In stony corals each polyp remains connected by its stomach to its neighbor. Soft corals also reproduce by budding. Species of Efflatounaria also are able to form a long runner called a stolon. After the parent polyp moves some of its own tissue through the stolon, a new polyp is formed. Then the stolon is reabsorbed forming two separate colonies.

Fragmentation, a process in which pieces are broken off during storms or other accidents is another method of asexual reproduction in both types of coral. If these pieces are able to connect to a hard service, they will continue to reproduce forming another colony. This is the method used for conservation programs.

The most important adaptation for reef corals is the symbiotic relationship between the coral and microscopic algae, ZOOANTHELLAE, which lives within its tissue and gives coral a big energy boost. Without this relationship reefs would not grow large or maybe not at all. By removing carbon dioxide from the water, zooanthellae also promote calcification. This enables the reef to build up faster than it can be eroded. Another relationship occurs between corals and sea grass or mangrove forests. Both mangroves and sea grass help reefs by trapping sediment that could smother the coral. In return the reef protects them from erosion by waves.

Nematocysts contain TOXINS used to capture food and for defense.

CHEMORECTORS detect sugars and amino acids to help the coral detect prey. The protective SKELETON is formed when hard corals secrete a calcium carbonate cup around them and retreat inside when threatened. Soft corals produce toxins that are unappetizing and deter predators. Other toxins kill species around them that compete for light.

Some corals can change SHAPE with varying amounts of light or wave action. In reef builders, connections between polyps allow those away from the food source to benefit.

Natural threats help the reef in the same way that strangler figs bring down old rain forest trees to make way for new growth. They include a sponge that bores in and weakens the skeleton. Boring sea urchins tunnel in 11cm (5.5 inches) and sit at the entrance to feed. Long spined black sea urchins scrape the reef for algae and other food. They help clean the reef, but attract mollusks and trigger fish which eat them and pieces of the reef. The debris from all this filters down and is cemented into the reef. One of the most dangerous reef predators is the crown of thorns sea star which feeds on the fleshy polyps by everting its stomach as it lies on the reef. Serious outbreaks of these sea stars have recently killed large sections of the Great Barrier Reef. Possible causes are over fishing of sea star predators such as giant clams, trigger fish, and puffer fish. Another reef predator is the parrot fish that bite off pieces of living coral.

As with many other threatened species, today the reef is also damaged by activities of humans which threaten to unbalance the reefs predator prey relationships. For example, pollution from agricultural runoff increases nutrients that promote the growth of phytoplankton that the sea star eats. When the forests are clear cut, the soil washed into the sea smothers the delicate polyps. Over fishing also damages the predator/prey balance. Reefs can regenerate, but when coral predators increase, the reef structure becomes vulnerable to storms and large sections of the reef are damaged or die. Humans also harvest blocks of coral for building, burn coral skeletons to produce lime, and dredge harbors.