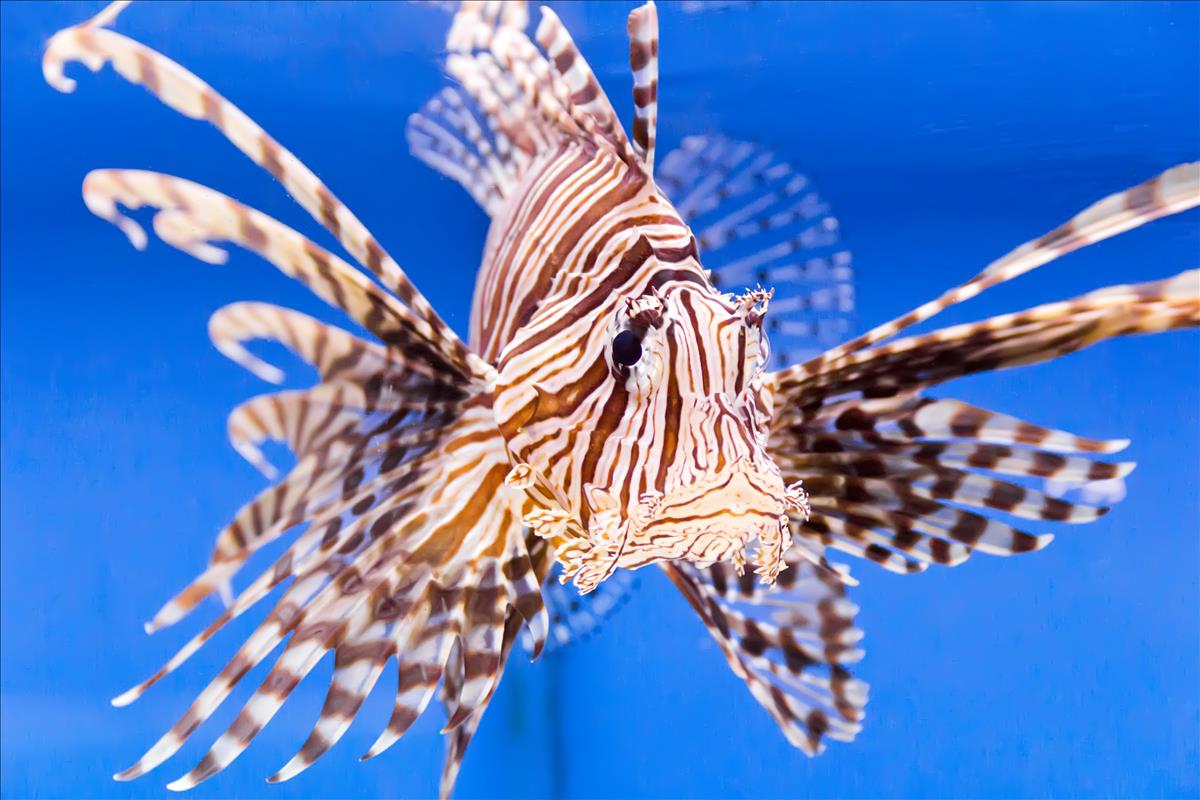 These dramatic looking fish are striped in varying shades of red, black, brown, orange, and white. They boast long elegant pectoral fins that are fan-like and extend well beyond the tail, as well as a spiky first dorsal fin. These fins give the fish the appearance of a lion's mane, which makes "lionfish" their common name. Their dorsal spines are long and individual. These fish reach lengths of 30 - 40 cm and can weigh up to 2.5 kg. Their eyes are hidden by colour patterns beneath a bony ridge across their face.

Originating in the Indo-Pacific, these fish are now an invasive species in warm oceans worldwide.

Lionfish are carnivores, eating a variety of fish, shrimp, and crabs - just about anything they can fit into their mouths. They sometimes cannibalize members of their own species when food is scarce.

Generally, they are solitary creatures, but they will come together to breed. Usually there will be one male lionfish with a few females. They are very territorial, and will actively defend their territory against other lionfish. Males are very aggressive and will display to other males by spreading their fins and swimming with their venomous spines directed toward the intruder. If necessary, there will be a fight with biting and stinging, until one of the males swims away.

The female releases her eggs into the water - an average clutch might be about 8000 eggs, with numbers varying from 2,000 to 15,000. The male fertilizes them before they float off into the ocean. In two days the eggs that have not succumbed to predation will hatch. The fry will stay close to the surface until they reach a couple of centimetres in length. Juveniles tend to stay in groups, and descend to the reef as they get bigger. It takes about 18 months for lionfish to reach maturity. They can live 5 to 15 years.

Lionfish have 13 needle-like dorsal fins that can deliver powerful venom. The sting is very painful to humans and can cause nausea and breathing difficulties, but it is rarely fatal. Although the lionfish is the most venomous fish in the ocean, the venom is purely for defensive purposes. The fish relies on camouflage and its fast reflexes to catch prey. It spreads its pectoral fins to herd small fish into a small space in order to swallow them more easily. With their huge mouths, they can swallow fish almost as large as they are. They are relatively inactive swimmers, trusting in their bright colours and startling patterns to warn predators of the danger in their venom. They are nocturnal, hunting mainly at night.

Lionfish are caught as food in some places. They are also popular in the aquarium trade. They have few predators due to their size and imposing appearance, but they are hunted by eels, frogfish, and scorpion fish. These fish are non-migratory, but have become an invasive species due to human interference, or accidents causing damage to aquaria, as was the case during a Florida hurricane. As an invasive species, they are also hunted by people to reduce the threat to native fish species.