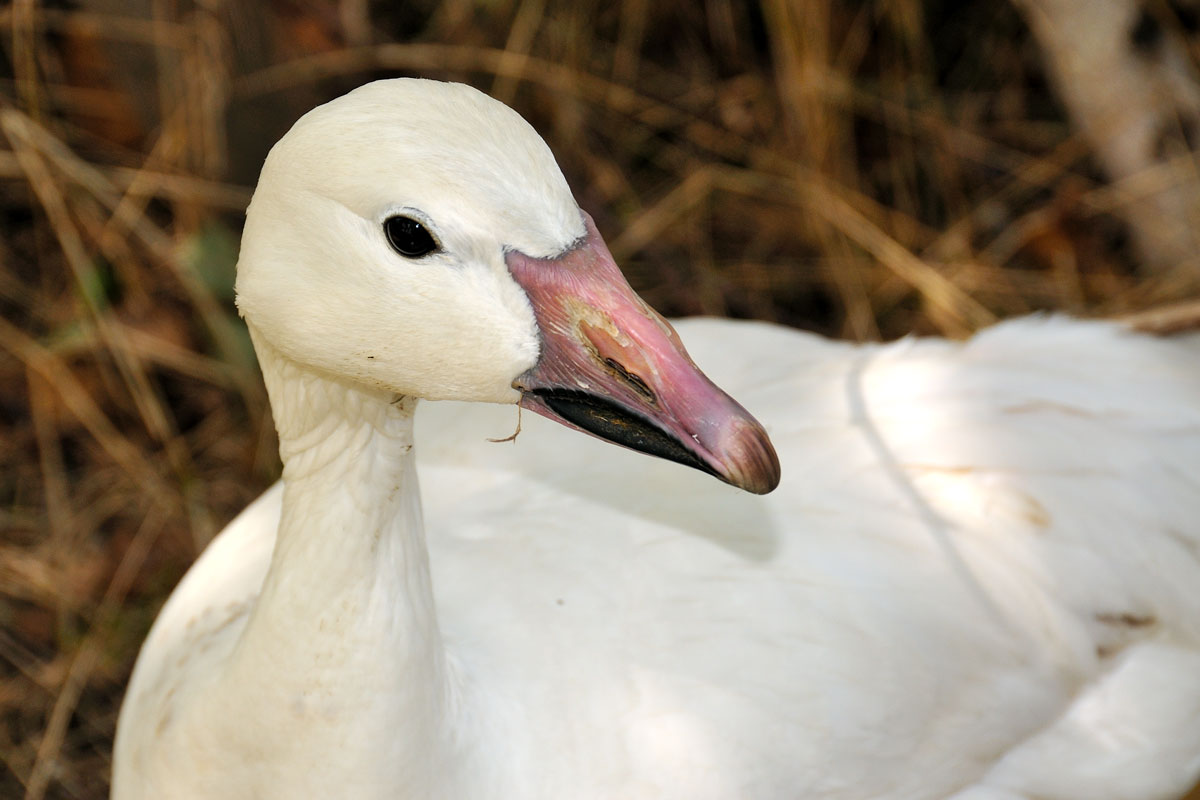 The lesser snow goose has two different appearances: white phase and blue phase. They are subsets of the same species. The two interbreed, and are found together throughout their range (colour phases are genetically determined). Phase members choose mates that resemble their parents. Individuals with mixed colour phase parents breed with either phase. The adult white phase is nearly all white except for black tipped wings; the legs and feet are red and the bill is pink surrounded by a patch of black skin called a "grinning patch" resembling a smile. The adult blue phase has a white head; the lower back and flanks are a bluish colour and the body ranges from very pale blue to almost white to very dark. The other colour features resemble the same as the white phase. Both phases have rusty orange faces and necks from the iron in the soil in which they feed. Males and females look alike.

Immature white phase geese have dirty white body and the wing tips are black. Immature blue phase geese are slate grey with little or no white, and legs and feet are red but paler than adults.

Goslings of white phase geese are yellow, and those of the blue phase are nearly black. Two month old birds of either phase are grey with black wing tips, although blue phase younger birds are generally a darker grey with light features on the chin and throat, also stained like adults. Goslings remain with grey patches of white beginning to show through until the following April or May.

The lesser snow goose migrates over most of southern Canada, west of Quebec. Unlike most waterfowl, it nests in dense, large colonies (up to 2,000 pairs per square kilometre) over a vast area of the Canadian Arctic, as well as Wrangell Island in eastern Siberia and eastern Asia.

Their nesting range lies along the west coast of Hudson Bay, Southampton Island, southern Baffin Island, the south coast of Queen Maud Gulf , Nunavut, and on Banks Island, NWT. Although only 20,000 to 40,000 birds winter in Canada, over 2 million birds nest in Canada’s north. The largest concentration of wintering birds occurs on the Fraser River Estuary. They arrive there from Wrangell Island (over 100,000 of them) in an amazing migratory spectacle.

Because lesser snow goose nesting colonies are spread over a huge tract of the Arctic, these geese use many different and lengthy migratory pathways, noisily flying in their undulating and shifting U shaped formation, composed of family groups, moving both day and night.

Eastern Arctic flocks stage on the west coast of Hudson Bay and in James Bay passing through Manitoba and Ontario en route to the Gulf of Mexico. Western Arctic birds stage on the Mackenzie River delta and the north coast of the Yukon and Alaska, fly up the Mackenzie Valley and through Alberta and western Saskatchewan towards California and interior Mexico. Birds from Wrangell Island head across the Bering Strait to Alaska, down the coast to the Fraser estuary, Skagit river, central California and Mexico.

Lesser snow geese are monogamous. Families and pairs migrate together with many pairs breeding before they reach the nesting grounds. Upon arrival, mating continues and nest building begins; pairs use the same sites as the previous year. Lesser snow geese use breeding sites located in northern Ontario. Nests are shallow depressions in the ground lined with dry vegetation and the mother’s down feathers. She will lay one egg per day, with up to a clutch of three to five eggs which, she incubates for approx. 23 25 days. Hatching occurs later on northern sites. Both parents guard the nest, with the female leaving it for a few minutes each day until close to hatching. The young fledge in 45 to 49 days with sexual maturity being reached at two to four years. The new family stays together for up to 24 hours at the nest until after the chicks have dried, then they begin to feed. At first goslings eat insects for protein, but after about two weeks they convert to vegetation. The families forage as far as 30 km from the nest site. During this time the adults and immature birds moult, everyone puts on fat layers, and the young learn to fly all in preparation for the migration ahead. When families return in the spring, young geese move out on their own. Life span in captivity is approximately 25 years.

If the nesting ground is still covered with snow, the geese wait until it has thawed. They can live on fat reserves for up to two weeks. When vegetation emerges, they begin to feed. If snow cover lingers until after late June, females will reabsorb their eggs and no further breeding will occur that year. Nesting sites are often situated near snowy owl nests. This practice is observed to lessen predation by arctic fox and jaegers (a gull like bird). Whether the owls take chicks in return for their vigilance is probable but unclear.

Lesser snow geese populations have exploded in recent years. Arctic warming allows for earlier nesting and greater chick survival. As a result, breeding sites and migration routes have become denuded of traditional food, and over crowding have made the geese susceptible to illness such as avian cholera.