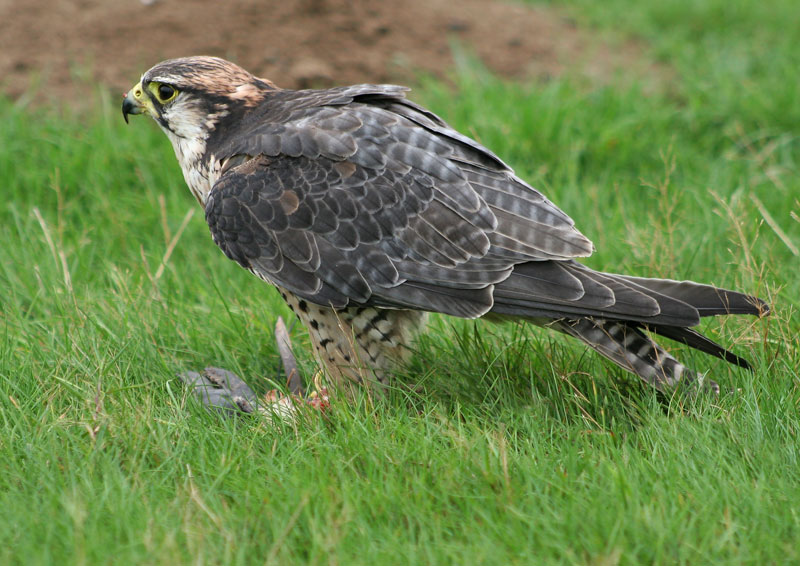 DESCRIPTION: Lanner falcons are stocky, powerful birds of prey. They are raptors, as are eagles, hawks and owls. They have long, thin, pointed wings, relatively short tails, and a powerful hooked beak of a greyish-blue colour. Their extremely sharp talons are non-retractable and they have an opposable hind toe on each talon. They have a noticeable “tooth”, halfway along the upper mandible, that fits into a notch in the lower bill. Their bones are lightweight, and some are hollow; the lightness allows for greater flying abilities.

Lanner falcons are large birds, measuring between 43 and 50 cm in length with a wingspan of 95 - 105 cm. Females can weight between 700 and 900 g, while the smaller males are between 500 and 600 g. Lanners are a slate to grey-brown colour above, paler on the rump, and pale buff below with sparse brown spotting on the breast. The crown and nape are rufous. They have a blackish band from eye to nape, narrow blackish moustachial marks, and dark streaking on the fore crown. Pale buff cheeks extend almost to the eyes; the tail has narrow pale barring. Wing linings are pale, but may have darker bands across the greater coverts. The base of the beak, orbital ring (cere) and the feet of the Lanner are yellow. Adults in North Africa, are more heavily streaked and barred below, and the crown is dark chestnut in colour. The sexes have similar colouration, and juvenile birds are generally slimmer with brownish back and dark streaked underparts.

Lanner falcons have a large range of distribution, being found throughout most of Africa, in southeastern Europe, Turkey, and Asia Minor.

These birds prefer areas dominated by rocky cliffs. They can be found on the African seashores as well as inland. They like open country and savanna since this is an ideal situation for them to hunt. They are also found in semi arid desert areas, and in areas that offer an arid climate. They avoid forests.

Their preferred food is small to medium sized birds, like thrushes or pigeons. However, they will also take bats, insects, small mammals, and reptiles. In rare circumstances, the Lanner falcon has been known to take domestic fowl. Food on the wing is hunted horizontally and caught in flight. They often share their hunting territory with other raptors, like owls, kestrels, and other falcons.

Lanner falcons are sexually mature at one to two years of age. They are monogamous, living in pairs, usually for life. Breeding takes place generally when there is an abundance of food available for raising the young. Lanner falcons do not often build nests; instead they reuse old nests of other birds like vultures or crows. Occasionally they will nest on a cliff ledge amongst the rocks, or in the hollow of a tree. Four to six eggs are generally laid, (one egg every two days), between mid-February and the end of March. Both parents share incubation duties, with the female doing most of it. The male gets food for both of them, while the female fiercely protects the eggs from potential predators such as birds, mammals, or reptiles. In some instances, it has been observed that the mating male is not allowed near the eggs either. When returning with food for her, he will let out a shriek, kri kri, and she will fly to him; the male drops the food and she retrieves it and returns to the eggs.

Incubation lasts for about four weeks with the chicks hatching out in mid-April. The first hatchling is usually the largest of the brood, and has been known to kill and eat the smaller ones. The female bird feeds the young. Fledging occurs five to six weeks after hatching in about mid May or early June, and fledglings are dependent on the parents for about two months. After that, they are on their own. Their lifespan can be up to 15 years in the wild.

Lanner falcons are raptors, and although they are at the top of their food chain, larger raptors may attack them as their prey. These fast and agile flyers catch and kill their prey with their feet; usually killing it with the long opposable hind toe. The lanner attains speeds of up to 144 kph when in pursuit of its prey. A human being, stooping or diving at these speeds would not be able to breathe at all. Raptors have special adaptations in their nostrils that allow them to breathe. Each nostril has two fins and a rod – the air is slowed down considerably as it passes by them, making breathing less of an effort. The lanner more often attacks its prey horizontally – head on, something quite unique in the raptor world. This requires incredibly fast reflexes to catch its prey in mid-air. Sometimes, lanners merely stun their prey in the air, and hit them so hard that they fall to the ground. The lanner will then use its “tooth”, and insert it in the cervical vertebrae of the prey to dislocate the neck. It uses its powerful hooked beak to grip and tear away at prey.

This species is diurnal, meaning that they are out and about during daylight hours. The lanner has forward facing eyes; with binocular vision (binocularity), which enables them to see prey from a great distance and judge distances accurately. Their eyesight is eight times better than humans. Normally, they hunt as a mating pair where the female will flush out the prey and the male will chase it down and catch it. It has been observed, during wintering, that they will sometimes group hunt – co-operating with other falcons to flush and ambush prey.

These birds are very common in Africa where their numbers are thought to be increasing. However, declining populations make it endangered at the European level. The reasons for these declining numbers are several, and include habitat loss, and elevated pesticide use. Eggs are stolen from nests for collectors, zoos, and tourists, and the birds themselves are shot by hunters seeking larks, or trying to control the populations of "pest" birds like corvids. Rock climbers disturb breeding sites, causing them to be abandoned. Generally Lanners are bred in captivity for falconry.