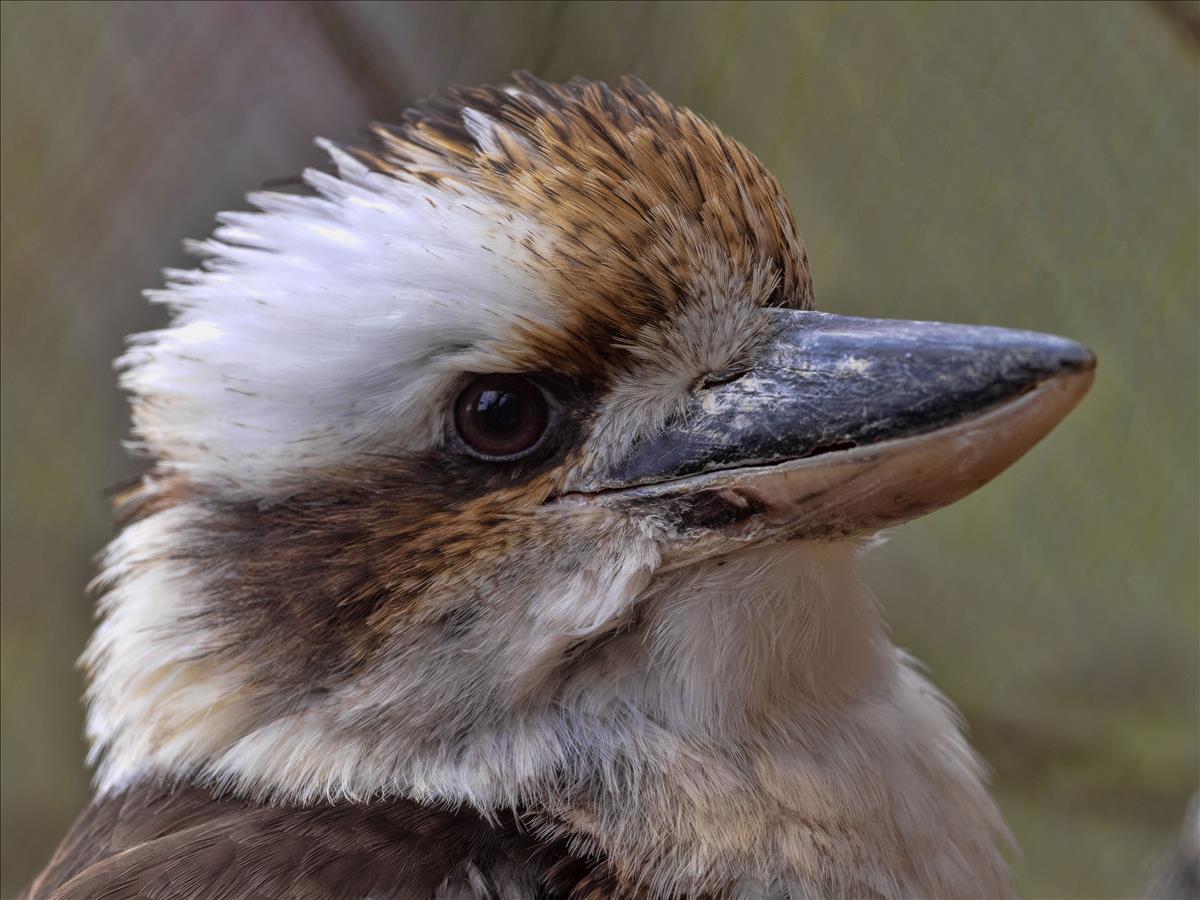 The laughing kookaburra has a distinctive broad, brownish coloured eyebrow which starts above its beak and tapers off behind the crown. The head is square in shape, and the beak comes down into a sharp point. Like the kingfisher, the kookaburra has a long bony ridge along the back of its skull, and strong neck muscles. Although not a diving bird, it is in the same family as the kingfisher. The wing feathers are a blue-brown colour, and the lower layers of feathers are white. Tail feathers are grey-brown, with white ends, and a brown bar pattern. The large, strong beak is black on top and light underneath. It is about 45 cm long and weighs 0.5 kg.

Queensland (except Cape York Peninsula), New South Wales, Victoria, and South Australia. They have recently been introduced to Tasmania and Western Australia.

They prefer open eucalyptus forests and woodland, riparian habitats along major watercourses. They also inhabit forest edges and clearings, bush (savanna-like country) as well as dense forest where it is wet and cold, and occasionally near inland water. Kookaburras have adapted extremely well to modified or urbanized areas such as farmland, parks and gardens, and residential zones.

It is considered to be a carnivore. It consumes a large variety of vertebrate and invertebrate prey items including small mammals, snakes, lizards, frogs, fish, birds, and insects. The majority of the food acquired is caught from the ground with a small amount being taken from shallow waters.

Pairs are monogamous and mate for life. They nest from September through to December (springtime in the southern hemisphere). Nests are built in hollow gum trees, old tree stumps, and holes in buildings. A hollow may be made within a termite nest.

During courtship the male feeds the female worms and other tidbits. This behaviour continues through the incubation period and even to the days when the young chicks have hatched and are still sheltered by the brooding adult. The female lays three to four white eggs, and after 24 to 26 days, the eggs hatch. The chicks are blind and naked, but are almost the same size as the adult. When the feathers first come in they are very dark, but after three months the chicks are identical to the adult. They are mature at one year but usually do not breed right away. Most young females stay with the parents for one to two years, and males stay two to four years. They will help to raise the next clutch of chicks, helping with incubation duties and then brooding, feeding, and defending the chicks along with their parents. They can live 11 - 12 years in the wild.

Kookaburras are highly social and often live in extended family groups composed of the adult breeding pair and offspring remaining in their natal territory as helpers. The dominant two birds are the breeding pair, and spend much time on conspicuous perches; scanning the ground for prey. The other birds in the “family” consist of the young from the year before and three or four males, to defend the brooding female.

Although its beak is suitable for pounding, bashing or knocking, a large catch cannot be split up or pecked apart. In order to feed, the young bird holds on with incredible strength to one end of the prey while the adult pulls backwards at the other end till the body of the victim snaps and is torn apart. The beak is also used in sparring to determine dominance between the males; where they hold on and try to knock each other off their branches, or one male gives up and flies away.

It is well known as the “laughing” kookaburra. Its loud call sounds like mocking human laughter, which starts low goes high and loud, then drops low again. The laughing call can be anywhere from a soft chuckle to a loud cackle. It can be heard at any time of day but most frequently, shortly after dawn and after sunset to dusk. One bird starts with a low, hiccupping chuckle, then throws its head back in raucous laughter: often several others join in. If a rival tribe is within earshot and replies, the whole family soon gathers to fill the bush with ringing laughter. The call is used for communicating between family members as well in defence of the nest site and to mark territory. Kookaburras are very territorial, and each pair maintains their territory year-round. When the chicks are about six weeks old, they fledge and make their first attempts at the laughing call of adults. It takes them another six weeks to perfect the laugh. Offspring participate in choruses and help to defend the territory from intruders.

Food is caught using a wait and pounce technique. They take up a post with a good view. When prey appears, the kookaburra drops straight down from its perch, its wings back and beak ready to grab. Large prey items are bashed against a tree or rock to kill and soften them.

Removing trees has an adverse effect on the kookaburra. Trees are needed for nesting, roosting and as perches while waiting for prey. Tree removal reduces breeding and feeding sites. Kookaburras are occasionally poisoned by eating the introduced marine toad. Overtime, pesticides used to kill insects may eventually build up in the bird’s liver when insects are consumed
Natural predators include birds of prey such as eagles, owls and hawks.