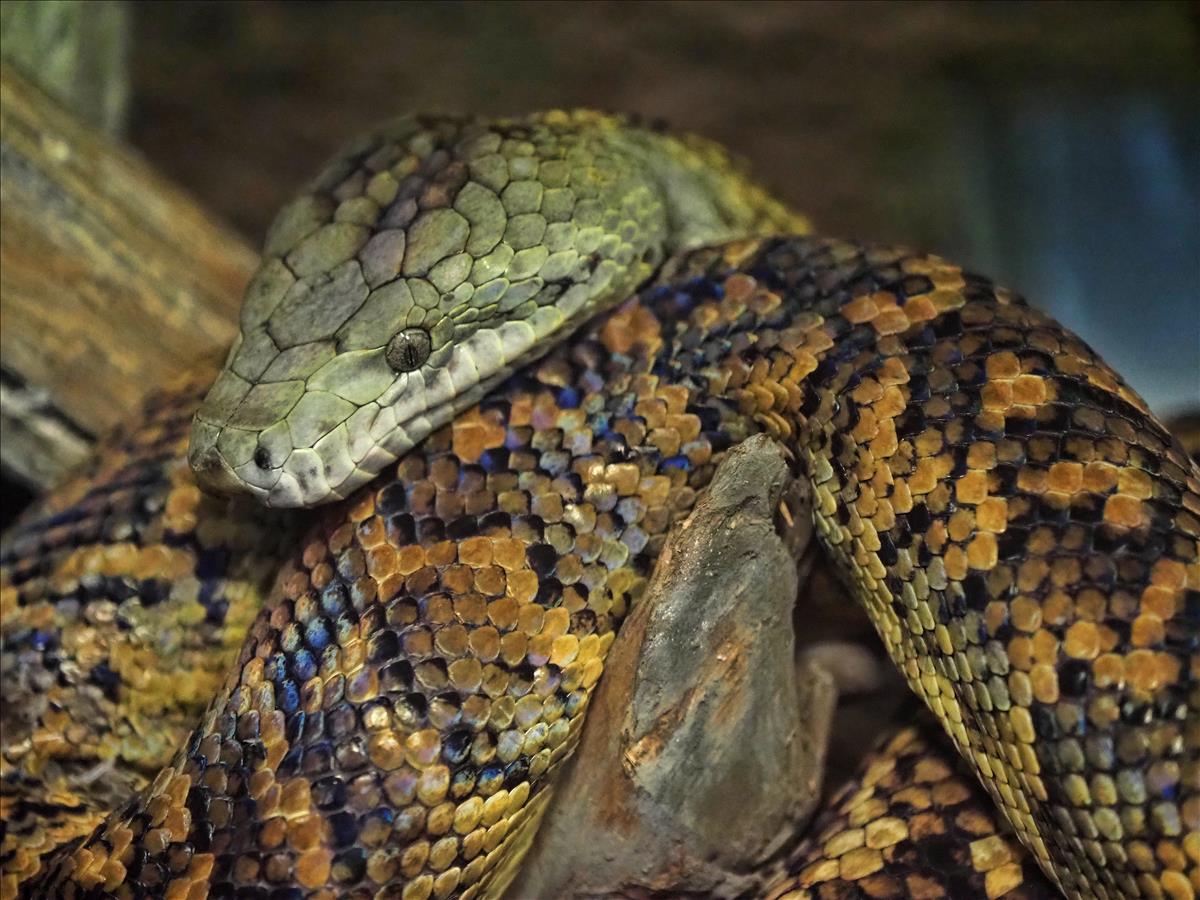 Reptile
Location at the Zoo:
Americas
Region: Endemic to the island of Jamaica and Goat Island, off the southeast coast.

Known as the Yellow snake, the Jamaican Boa is the largest terrestrial predator native to the island. These moderate sized constrictors can attain weights approaching 5 Kg and lengths from 1.5 to 2.3 m. Sexual dimorphism (difference between males and females) includes females generally being larger in body length and girth, whereas males generally have longer tails (containing the hemipenes) and longer cloacal spurs (vestigal hind legs).

The colour varies along the length of the snake. The head and anterior half of the body are yellowish green with irregular black cross bands. Towards the tail the colour becomes progressively darker until almost entirely black at the tail tip. The scales also produce an iridescent sheen when light is shown upon them.

Found only in Jamaica. Only isolated pockets of suitable habitat remain leading to a fragmented distribution on the island.

Prey items for adult Jamaican Boas include native bats and birds as well as introduced rodents such as rats. The young feed on small lizards and frogs until they are large enough to tackle the larger prey items of the adults.

Adults employ an ambush strategy to secure prey. Hanging from trees limbs allows them to snatch prey, like bats or birds, from the air when they fly past. The prey is captured in flight and quickly wrapped up in constricting coils to dispatch it before it is swallowed whole.

Jamaican Boas typically mate between February and April. The change in day length, temperature and rainfall signal the snakes to seek out a mate. Jamaican boas are ovoviviparous; embryos develop within their mothers' bodies. Rather than laying eggs and having them hatch on their own, the female retains then inside her, maintaining them at suitable temperatures for their development and then gives birth at the time they are essentially ready to hatch. They normally give birth to 5 to 44 babies which measure about 50 cm in length. The young are on their own shortly after being born, relying on a small reserve of yolk inside them for nourishment until their first shed. They will take their first meal shortly after their first shed when their yolk reserves have been used up. They are known to live up to 30 years in zoos.

Jamaican Boas are nocturnal and arboreal, often hanging from branches or limestone outcrops near cave entrances where they snatch bats from the air as they enter and leave the cave. Long needle like teeth allow them to secure prey in their mouths while they quickly wrap and constrict it with powerful body musculature. As with other snakes, they use their forked tongue to chemically sample the air to detect prey.

Habitat loss, introduction of non native species and persecution are the main threats to wild Jamaican Boas. Much of the original forest has been lost, leaving a patchy distribution where suitable habitat remains. Some of the best remaining habitat on the island is now under threat from bauxite mining operations. Since the early colonization of Jamaica, non native species like cats, dogs and pigs have been introduced and have had a negative impact on the boas. Rats were also introduced and have become a prey item for the snakes. The introduction of the mongoose to attempt to control the rats however has harmed the boa population since the mongoose also prey on snakes. The belief that the snake is harmful to people has led to persecution by locals. Snakes are sometimes killed on sight because they are perceived as a threat. Only a collaborative in situ and ex situ conservation effort aimed at protecting and restoring habitat, public education and maintaining a strong assurance population will save the Jamaican Boa from extinction. The Toronto Zoo is part of the Jamaican Boa Species Survival Plan (SSP), which is one part of that conservation effort that is focused on maintaining a healthy assurance population.