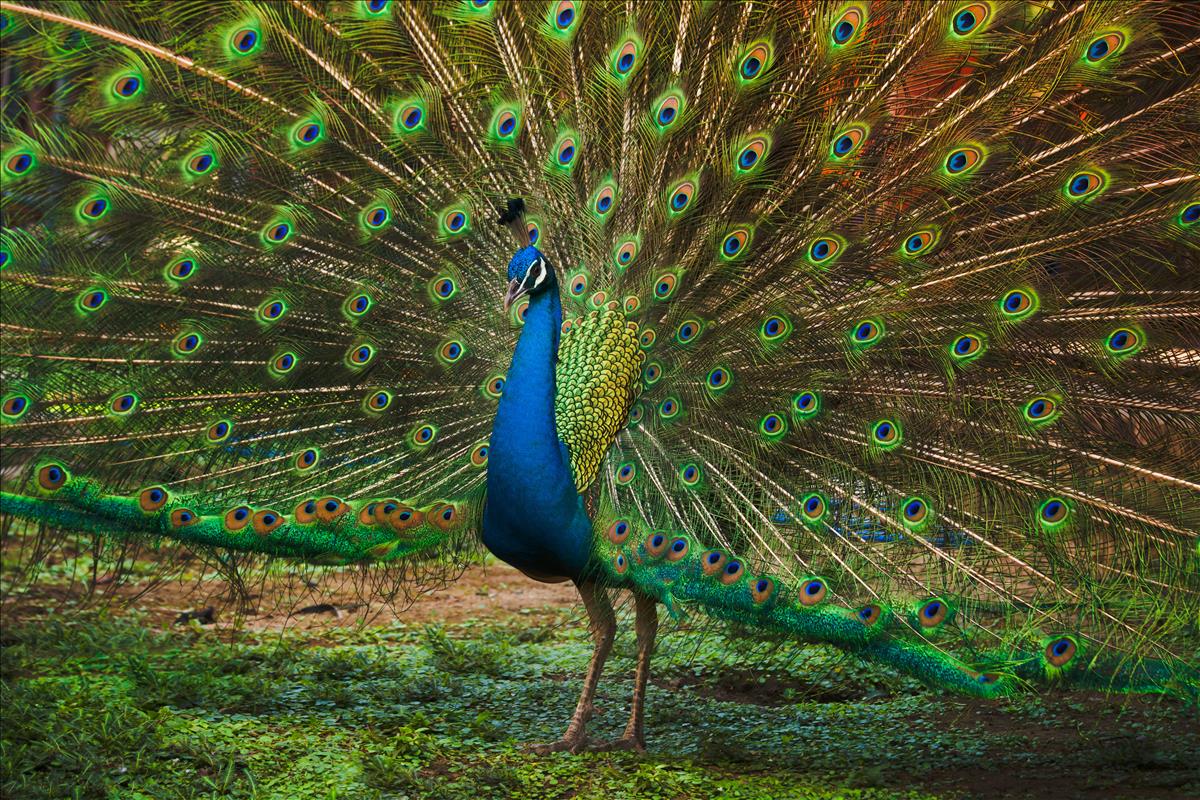 This species Pavo cristatus is the national bird of India. It is sometimes simply called the peacock; a peacock is the male, females are known as peahens and the young are peachicks. Pavo is Latin for peafowl, whereas, cristatus is Latin for crested. In the wild the head, neck, and breast of the peacock (male) is a glorious royal blue. They have white facial patches, one above the eye and one below. The head bears a fan-shaped crest made of a bunch of divergent brush-like feathers tipped with blue. The body is grayish, barred with brown on the back and brown wings and underside. The real beauty of the peacock is in its train, usually called its tail although made up of greatly elongated tail coverts, not of tail feathers. The upper tail coverts on its back are elongated and ornate with an eye (ocelli) at the end of each feather. These are the peacock's display feathers. The tail itself is brown and short as in the peahen. Including its train, a peacock measures 2.2 m of which nearly two-thirds is train. Immature males have varied plumage, but will have the fan-shaped crest and mottled blue upperparts. Second year males show a smaller tail, often without ocelli. By the third year, they reach full plumage and sexual maturity. The tail may continue to grow for another two to three years. Males will molt and lose their long coverts each year in late summer. The peahen is less showy, her plumage is more brownish and she lacks the train. Her facial skin and crest shape are the same as in male, but her crest is brown.

Pakistan, India and Sri Lanka. Many feral populations exist throughout the world.

The species is found in dry semi-desert grasslands, scrub and deciduous forests. The Indian peafowl has been kept in semi-domestication for over 2,000 years and has been taken to many parts of the world as an ornamental bird. They feed on the ground and roost in trees. Where they are undisturbed, they readily live around human settlements.

Grain, seeds, fruit, insects, bread and other scraps. They seem to be ready to try almost anything edible, plant or animal. Peafowl have been seen to kill and eat snakes and also mice.

Males use their long ornate tails for courtship. This begins with the fan dance. The peacock shows off his fan to the peahen or to any passing bird, or even human. He sometimes wheels around and displays the back view of the fan. He often postures and struts while showing off, but in fact this is often due to the need to keep his balance as the wind catches this enormous fan. From time to time he quivers the fan or rattles his quills. The effect is frequently lost on the four to five hens in his harem but eventually mating takes place. The display is not the prerogative of the peacock alone; the peahen and even the peachicks will posture with their undersized tail coverts spread. The nest is usually a shallow scrape in the ground. They lay a clutch of four to eight eggs which take 28 days to hatch. The eggs are light brown and are laid every other day usually in the afternoon. The male does not assist with the rearing, and is polygamous with up to six hens. The hen feeds the chicks from her beak, at which the chicks instinctively peck.

It forages and nests on the ground but roosts on top of trees. However where there are many ground predators the nest may be built in trees. Peacocks bugle loudly in the late afternoon as they go up branch by branch. Their loud call can be heard intermittently after dark also. The plumage serves as an effective camouflage in the forest. The colours result from the micro-structure of the feathers and the resulting optical phenomena. The ornate train is believed to be the result of female sexual selection. Studies have suggested that the quality of train is a signal of the condition of males and that peahens select males on the basis of their plumage. More recent studies, however, suggest that other cues may be involved in mate selection by peahens.

The peafowl is venerated in parts of its range, but elsewhere it is killed for food.