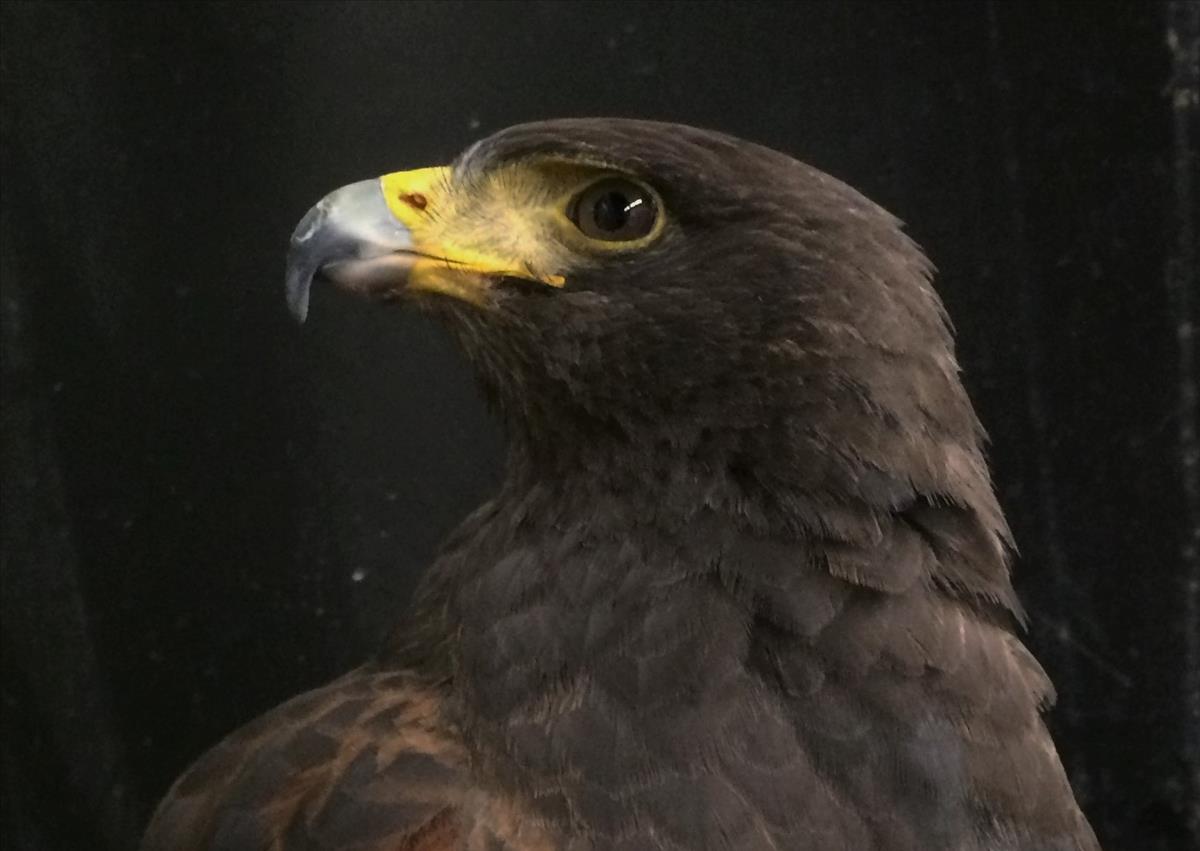 The plumage of the subspecies P. u. harrisi has few markings. Its head, underparts, greater wing coverts, primaries and secondaries are brownish black. Right in the middle are rufous shoulders with the rufous transitioning into edging on the black median coverts. Rufous also juts out from the underparts as fluffy leggings that reach mid-tarsus. Legs and toes are yellow with black talons. Further contrast is provided by the white rump. White continues onto the tail as a broad band across the primarily black tail, which is long and graduated and tipped white. Up front, the cere, lores, orbital ring, gape, and chin are yellow. Eyes are a rusty brown. The bill, made of keratin, is a pale blue that becomes black where the tip bends down sharply. P. u. unicinctus is similar except for the following markings: subtle white streaking on the forehead, throat and underparts; slight dusky barring on the thighs; and light mottling of the flanks.

Seen from below in flight, the remiges (primaries, secondaries and tertials) of P. u. harrisi are dusky grey. The linings (or underwing coverts) are rufous. P. u. unicinctus has more markings; the linings are mottled a little. Secondaries have some dusky barring. The base of the primaries is white. From above, both subspecies have rufous shoulders.

Juvenile colouring is lighter overall especially when seen from below. The head of P. u. harrisi is finely streaked with buff, while its dark underparts are broadly streaked with white. Rufous thighs have fine white barring while the undertail is finely barred in dusky grey. In flight, its underwings have white primaries and grey secondaries. The upper tail has fine white barring. Buffy streaks on the young P. u. unicinctus’ head stand out. Plumage above is dark with rufous edging that is more visible on the shoulders. Underparts are mostly cream with thick, dark streaking. From below, the primaries are white with broad black tips and grey fingers with dark barring. Secondaries are barred grey as is the underside of the tail.

P. u. harrisi inhabits Baja California. Further east, its range extends from southwest Arizona down the western coast of Mexico all the way to Costa Rica. Still further east, a broad band north of the Rio Grande in southwest Texas spreads into northeastern and central Mexico to join the west-coast strip. Nominate P. u. unicinctus, the South American subspecies, is usually called the bay-winged hawk there. It ranges down the Pacific coast from extreme southwest Panama to the Peruvian border with Chile. Further south in Chile, it inhabits a coastal strip from about 34˚S to 40˚S. On the Andes’ east side, it occupies northeastern Columbia and northwestern Venezuela. Another range encompasses northern and eastern Bolivia, southern Brazil, Paraguay, Uruguay, and a large swath of northwest and central Argentina to about 35˚S.

Though the Harris’s hawk can be found in treed swamp, its usual habitats are scrub, savanna or semidesert. This open country will have a few trees or patches of woodland with water nearby. In Texas, Arizona and Mexico, it prefers mesquite semidesert. It ranges from sea level to 1500 metres.

In all areas where Harris's hawk is found, part of its diet is small mammals. These include squirrels, rats, gophers, rabbits, and jackrabbits. In Central America, birds are the primary prey, anything up to the 33 cm gallinule. In some areas, lizards are the main food source. Insects are also taken. If nothing else is available, they have been known to eat carrion.

In the USA and Mexico, nests are found as high as ten metres on saguaro cacti, yucca or other arid scrub. Further south, nests can be found 20 metres up in a solitary tree or on a forest edge. The flimsy but compact stick platform is lined with green leaves, grass or moss. Clutch sizes are two in the south and three or four in the north. After an incubation period of 33 to 36 days, hatching is asynchrous over two to four days. The hatchling has its eyes open and almost immediately is holding up its head to be fed. Its down is cryptically coloured. Ready to explore outside the nest at about 38 days, a juvenile soon fledges and is ready to fly. It may remain at the nest for another three to four months. If prey is plentiful, two or three broods are possible in a year.

Unique among birds of prey, Parabuteo unicinctus employs cooperative hunting. The hunting party can number up to six: the mated pair, nonbreeding, earlier offspring and usually an unrelated adult male. In area without cover, they pounce on their prey, overwhelming it with numbers. If the quarry takes cover, one bird flushes it while the others wait nearby ready to pounce. When a “relay attack” takes place, each hawk takes a turn in the lead position. If the first misses, the next is ready to strike. Another may come from the opposite direction to turn the prey around. Whatever the technique, the victim tires while the hawks remain fresh.

It is theorized that the limited availability of larger prey in these arid areas pushed Harris's hawks to adapt cooperative hunting. As a group, they can take down bigger prey such as the jackrabbit, a species they have no chance of capturing alone, thus expending less energy for more meat. They’ll also have a greater success ratio, increasing the odds that the young will be fed and that each individual obtains food every day. A group can also guard leftovers, which they can save for the next day. To hide meat from other birds, they use a technique called “mantling”, which involves a hawk standing over a carcass with wings spread. They often dine on the ground. Outside of breeding season, this species often hunts alone. At midday, they usually rest.

Hunting adaptations begin with the Harris's hawk’s keen eyesight as it can scan from a branch or a utility pole or while soaring, and make out distant objects. Its hearing is also excellent. With its long (two times its body length), paddlelike wings, it can tail other birds with rapid acceleration and nimble maneuvering of its slim body. After quick, shallow, floppy wingbeats, it glides with wrists above the body and tips pointing down. The wing profile in soaring is flat. When its wings are fully spread, the long, narrow outer primaries separate into “fingers”. The aerodynamic advantage of such “fingers” is that they allow Harris's hawk to slow down without stalling.

At the nest, a second adult male may be involved with raising the young by bringing food and tending to other needs of the newborn like providing shade. Sometimes it's a polyandrous relationship: the female mating with both males. Usually two or three other helpers assist by defending both the nest and the territory. When an intruder happens by, the helpers get excited and issue an alarm call. Intruders are often subjected to chasing and foot grabbing. Helpers may also provide food for the young bird. However all is not as it appears as the parents are the hardest workers and the helpers are intent mainly on ensuring their own survival. Some ornithologists believe that this cooperative breeding is a consequence of cooperative hunting because the latter benefits the newborns and thus the parents. So the parents will tolerate some selfishness by the helpers.

Another adaptation helps increase family size: most first-borns are male. Since female hatchlings require more food to attain their greater body size, males are the less expensive sex. If a female were born first, that would mean less food for subsequent hatchlings. Therefore more children will survive if the male with its lesser food demands arrives first. Territories for breeding birds range from 2.5 to 5.5 square kilometers dependent on availability of food and other resources.

The breeding female is the dominant bird in her family grouping. If there's a second female, she’s dominant to all males. The breeding, or alpha male is dominant to other males. If there's a beta male, he may try to breed with the alpha female, usually unsuccessfully. Others in the group are usually sexually immature offspring of the alpha pair. They're subordinate to the older birds. Backstanding or stacking is a practice of Harris's hawk. One bird will stand on another’s back. Infrequently a third bird will stand on the second. The lowest bird is the dominant bird in the group. When it flies onto a perch, the subordinate bird will surrender its spot and leap onto the dominant bird’s back. Observers can be misled into believing that copulation is taking place, which they may then turn into assertions of polyandry or polygyny.

Parabuteo unicinctus doesn’t migrate. Out of breeding season, they may be solitary or hang in groups of 10 to 15. The young may stay on as helpers with their parents for up to three years. They are silent except when breeding. While the oldest known Harris's hawk was 14, the average lifespan is 11.

Degradation of habitat is the most widespread peril for Harris's hawk. In Mexico and the southwest USA, the removal of mesquite and brush is a problem. River valleys in the same areas are being urbanized. One population on the Colorado River was extirpated because of dam construction and dredging. Such disturbances can cause parents to abandon their nest. In Arizona where vegetation is protected, these hawks have been able to adapt to urbanization as long as the houses are spread apart and asphalt is limited. Another big killer is electricity-transmission wires. This is expensive for the electric companies because they have to reinsulate and often must provide perching arms. So some companies are preemptively adding extra insulating protection to the wires and installing perches. Shooting is also a problem by those who consider these hawks a pest. But Harris's hawks are the farmers’ friend as they eat the mice and rats that destroy crops. Natural predators include the great horned owl which attacks at night (the hawk may be the attacker during the day). Coyotes and common ravens also prey on young birds.