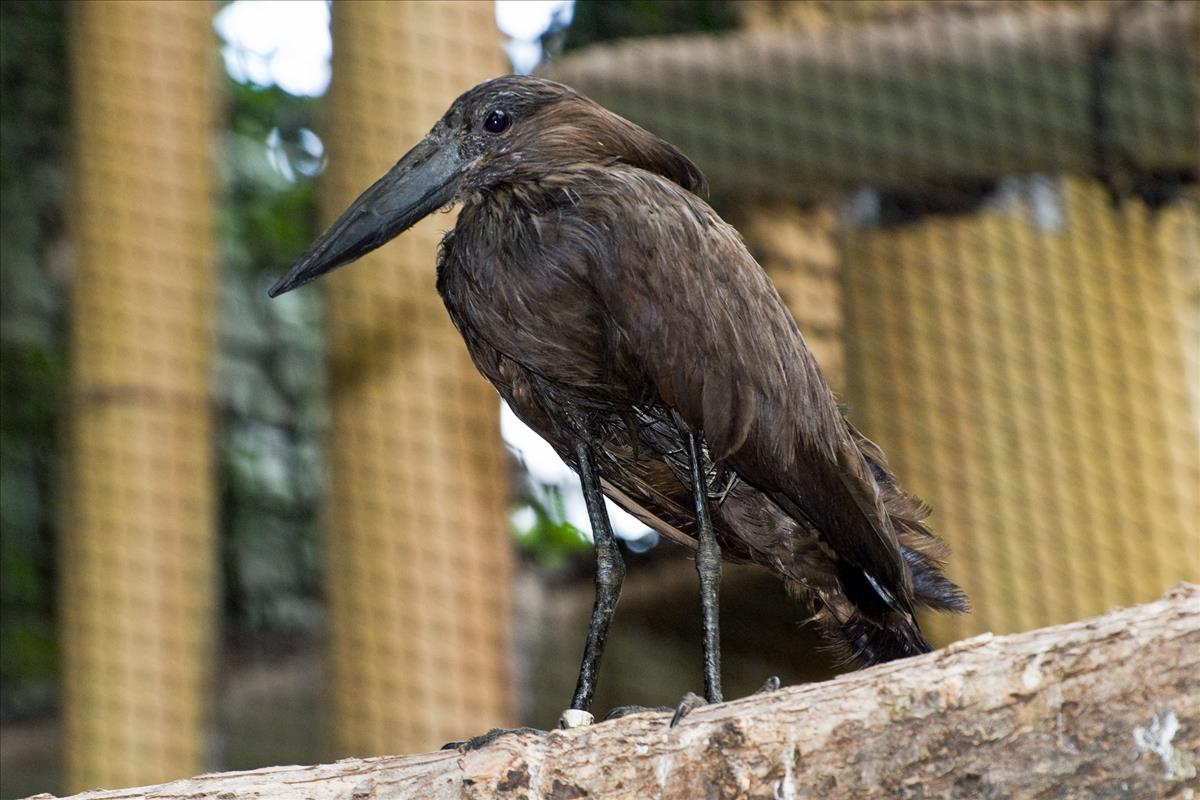 Hammerkops are a rich sepia brown colour, which becomes a purplish gloss on the upper parts and the flight feathers. There are several darker brown bars on the tail, and faint grey streaks on its throat. The bill, legs and feet are black. Male and female birds have the same appearance.

The large, long bill is laterally compressed with a small hook at the end of the upper mandible. It features a long crest of pointed, horizontally-carried feathers on the back of its head which give the appearance of counterbalancing the bill. In flight, the long neck is partially drawn back. The body is plump with broad rounded wings and a square-tipped tail. The lower portion of its long legs is bare of feathers. There are four toes on each leg; the three that face forward are connected by a partial web. There is a pectinated edge on the middle toe which aids the bird in preening. The fourth toe faces backwards.

This is the smallest of the storks. It is about 50 cm long.

This non-migratory bird is found in marshes, mangrove swamps, by the edges of lakes and slow-moving rivers where there are trees nearby. They may also be found on irrigated land such as rice paddies. Most remain sedentary in their territories, which are held by pairs, but some move into suitable habitat during the wet season only. Whenever people create new bodies of water with dams or canals, hammerkops move in quickly.

They eat a varied diet of amphibians, fish, insects, and crustaceans. Young hammerkops feed on tadpoles.

In courtship, hammerkops perform elaborate displays, bowing and flapping their wings and giving out a yapping, cackling call. Sometimes several birds will hop each other’s backs, stretch their wings and raise their crests. Breeding can take place anytime during the year. Mated pairs begin to build their nest by making a platform of sticks held together with mud, then builds walls and a domed roof. A mud-plastered entrance 13 to 18 cm wide in the bottom leads through a tunnel (up to 60 cm long), to a nesting chamber big enough for the parents and young.

Three to seven white eggs with chalky surfaces are laid. Incubation takes about 30 days and is shared by both parents. The young hatch covered with gray down. These downy, helpless young are tended by both parents. By 17 days after hatching, their head and crest plumage is developed, and in a month, their body plumage. Although the young may make their first flight when they are about seven weeks old, they will still return to the safety of the nest each night for a month or more.

They have long bills and necks, and long legs for wading. When feeding, either singly or in pairs, they wade in shallow water where they shuffle their feet to disturb their prey. They strike forward with their beaks, depositing their prey on land before devouring it. They are sometimes seen to use hippos as hunting platforms. In flight, hammerkops snatch food from the surface of the water. They are partly nocturnal, and get some of their food at night.
Hammerkop's behavior is unlike other birds'. One unusual feature is that up to ten birds join in "ceremonies" in which they run circles around each other, all calling loudly, raising their crests, fluttering their wings. Another is "false mounting", in which one bird stands on top of another and appears to mount it, but they may not be mates and do not copulate.

Pairs build the largest roofed nest of any bird. The hammerkop's enormous nest is generally 5 - 13 m above ground in the fork of a tree or a fissure in the rock face. The nest is made of sticks, twigs, grass, dried mud and dung and has a diameter of up to two metres. It is oven-shaped, resembling a closed ball with a small round entrance hole and tunnel in the least accessible side. It is incredibly strong - strong enough to support the weight of a man. Sometimes nests are decorated with brightly-coloured objects. It may take several weeks for a pair to build a nest. After a nest is finished being built, the pair will give displays similar to those of the group and mate ceremonies, often on top of the nest.

Sometimes nests are abandoned by the hammerkops after a few months, but are used by other birds and reptiles. Even while the hammerkops are in residence, other creatures sometimes use the nest as shelter. They roost in low trees and will often return to the same roosts. Their calls include a sharp shrill “taket taket” and in flight a “sikwee-kwee-kwee”.

Hammerkops are considered a species of Least Concern; however, water pollution and habitat destruction could quickly affect their numbers.