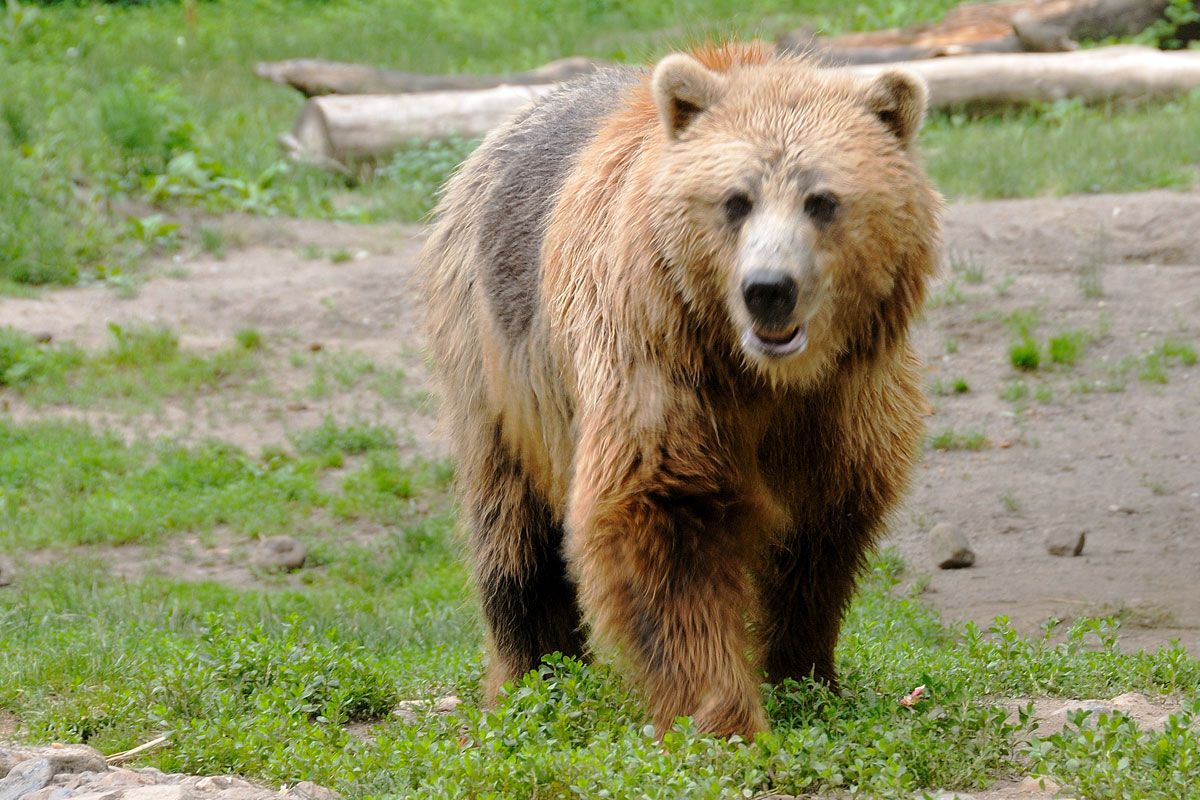 The grizzly bear, common to North America, is a subspecies of the brown bear (Ursus arctos). The fur can be anywhere from a cream colour to a dark brown or nearly black. The tips of their fur is white or silver giving them a grizzled look, hence the name “Grizzly”. The pelt is dense and offers excellent protection from insects and the environment in general. Cubs tend to have a lighter coloured coat. The head is large in relation to body size; its snout protrudes from a concave or dish shaped face with a high forehead. The large hump on the shoulder is mainly composed of muscle and fat. This provides them with exceptional digging power when carving out dens and when searching for food. The large paws have five digits; long claws measuring between 5-12 cm, with the claws of the front paws being longer and straighter. They are plantigrade (they walk flat on their paws). Although they belong to the order of carnivores, in reality they are omnivores. They have pronounced canine teeth for tearing meat but have large, flat molars for grinding plant material.

The male is considerably heavier than the female and can typically reach a weight of 385 kg, depending on where it lives. The heaviest ever recorded weighed was 700 kg. A female can weigh up to 200 kg. Grizzlies grow to an average of 2 m when standing up and measure 1.25 m at the shoulder when on all fours.

The larger populations appear in North America, but they can also be found in Europe, northern Asia and Japan. In North America, grizzly bears presently occupy a range that spans from the pacific coast of Alaska (approximate population 30,000), to Western Canada (population 25,000 or more), and smaller populations in the lower states of the USA with the majority located in the Yellowstone National Park area.

Grizzly bears typically live in mountain ranges where rich forests and plenty of streams can be found. They will also make use of scattered meadows and grasslands within the mountain range providing them with a diverse environment.

Much of the grizzly bears diet consists of berries, bulbs, roots, fruits, nuts, as well as insects. In Yellowstone and Glacier National parks in particular, they rely heavily on army cutworm moths as a source of protein during the months of July to September. The moths arrive during the flowering season, taking shelter amongst the rocks during the day. The bears locate them by their scent. They are also adept hunters catching a variety of small mammals such as rodents, reptiles, amphibians, birds and bird eggs, and in the coastal areas, salmon dead or alive. Since hunting adult elk, moose or caribou is too dangerous for them, they concentrate on the calves or sick and/or aging animals. They also occasionally eat carrion.

Grizzly bears are polygamous. Both the males and females may have more than one mate. The female typically mates every three years from June to mid July. She can have one to four cubs but three is the average. The cubs are born during the January-March period while the mother is still in a state of dormancy. The cubs weigh only 500 g at birth and are blind, toothless and have little fur. They survive the winter by drinking the mother’s milk, and cuddling up to her to stay warm. They are weaned within five months. The mother is very protective of her cubs during the first year of their life and is responsible for finding food for them. Cubs stay with their mother at least until the second spring of their lives but some stay until the third or even the fourth spring. Young bears reach sexual maturity in their sixth or seventh year and continue to grow in size until they are 10 or 11 years old. Life span in the wild is between 15 and 18 years, in captivity 28-32 years.

When searching for prey, grizzlies primarily rely on their acute sense of smell, bowing their heads close to the ground and sniffing while they walk. They also capitalize on their sight and listening periodically standing on their hind legs to gain a better view of their surroundings as well to hear better. While standing, they turn their head from side to side to pick up any sound or smell. They have a remarkable sense of balance; they can sit up and walk upright for a few paces.

Usually, the bear isn’t aware of the location of a herd of ungulates and may spend several hours conducting this search. They stay along the edges of a forest bordering the meadows to remain unseen and are only interested in calves lying down or sleeping since these are the easiest to catch. When a herd is located, the grizzly will circle the animals hoping to find his prey and make certain not to be seen by the herd. When a bedding calf cannot be found, they may decide to ambush the herd to find his prey. With a burst of speed, they will attack focusing on straggling calves left behind without the protection of the adults. Knocking the calf over with snout or paw, they will usually begin eating the abdomen to kill the victim quickly.

In the early 1800’s the grizzly bear population thrived in much of North America but by 1975 much of their population had been diminished or even extirpated in most of the US as well as in about 75% of their territory in Canada and Alaska. The cause was, without question, the destruction of their habitat by the increasing human population (i.e. expansion of cities, roads, railroads, deforestation, mining etc.) In addition, another major factor was the rapid decrease of prey animals. At that time the grizzly bear was listed as threatened by the US Fish and Wildlife Service and conservation efforts began. The PC government in Alberta has recently begun a conservation program together with some stakeholders such as the Canadian Association of Petroleum Producers. The Endangered Species Conservation Committee has listed the bear as a threatened species. They have discovered that 90% of the bear mortality is within 500 m of a road. Industry is being urged to build underpasses or overpasses on their roads to help protect this species. Primarily hunted as trophies, but once hunted for their meat and hides. Various organs and body parts are also currently sought after by Asian markets.