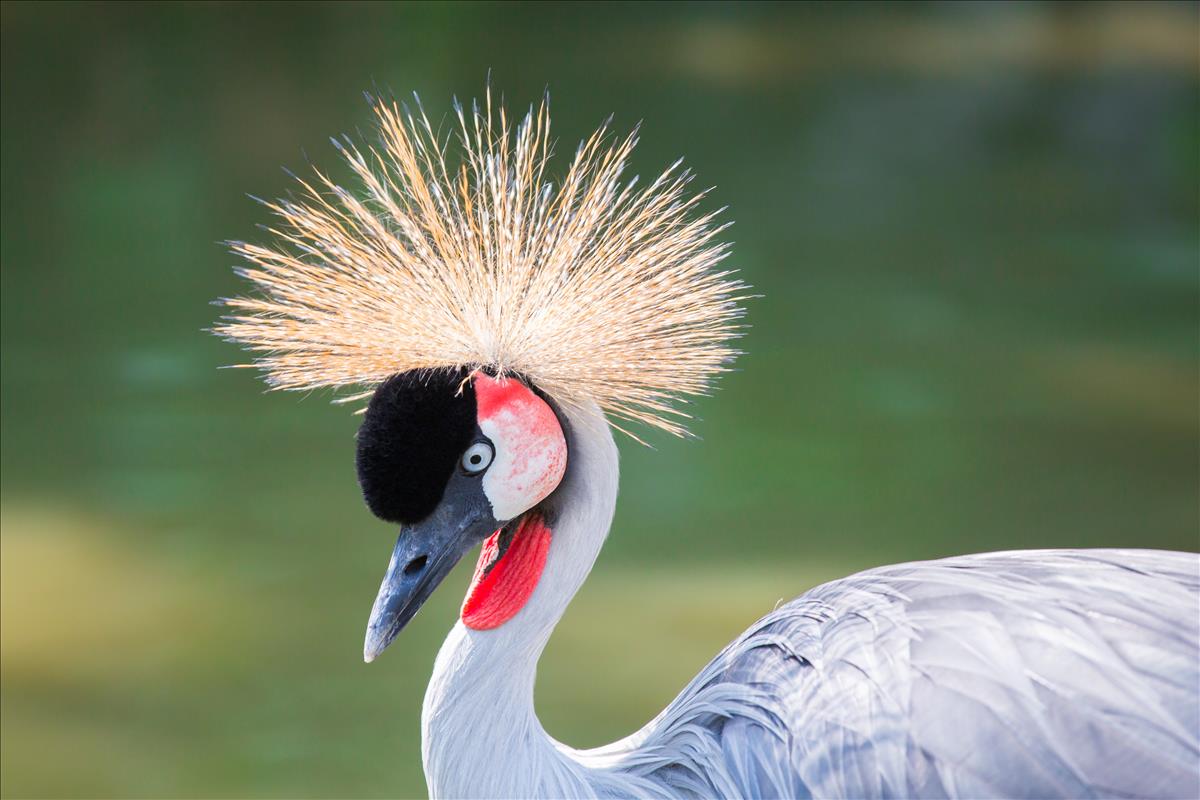 A spray of bristles erupts in a straw-coloured burst from the nape of this crowned crane. Tipped in black, the bristles have fine rings of white and brown. From the crown, a mound of velvety feathers runs onto the bill looking like a stylish hat or a bad toupee. More velvety feathers, though quite short, surround a bare, white cheek patch topped by a bright-red half-moon. Pale grey or blue eyes look out over a pointy, black bill with large nostrils halfway to the tip. A red gular (throat) sac, black where it attaches to the chin, hangs as a flattened pouch on the throat.

From the nape, pearl-grey feathers gradually elongate to points as they extend down a lengthy neck. Pearl grey continues down the back onto the tail. When the wings are unfolded, the primary coverts make white the standout colour. The primaries and the first two secondaries are black. The secondaries continue as black on the inner web, but the outer web is a maroon chestnut. The inner great coverts, broad, long and straw-colored, are disintegrated plumes that hang down over the secondaries. Legs are long and black.

There are two subspecies: B.r. regulorum is described above. B.r. gibbericeps has more red on the cheek patch. Juveniles are grey overall except for a brown crown and nape, colours which provide camouflage.

B.r. regulorum has residence in most of Zimbabwe. Another strip starts in southeast South Africa, goes through Swaziland and ends in the northeast of South Africa. B.r. gibbericeps ranges from the southern half of Uganda across much of Kenya down through Tanzania, Rwanda, Burundi, Zambia, Malawi, northwest Mozambique, as well as much of the eastern part of the Democratic Republic of the Congo. Both subspecies have pockets on isolated pans (lakes) and rivers in Angola, Namibia and Botswana.

For nesting, the grey-necked crowned crane needs wetlands with water up to one metre deep and vegetation about one metre above the surface. This would include marshes, pans, dams with tall vegetation adjacent, riverine woodlands, and shallow flooded plains. To feed, it requires grasslands of short to medium height nearby. Increasingly, it has been moving onto cultivated areas such as cropland and pasture. Trees should also be available for roosting. Outside breeding season, it will move away from wetlands onto savanna or grasslands.

Being a short-billed crane and an omnivore (like all cranes), Balearica regulorum seeks out seed heads from plants like sedges, fresh grass, agricultural pulses, nuts, soybeans, maize, and millet. Insects like Orthoptera (crickets and locusts) and Lepidoptera (butterflies and moths) are also on the menu. Crabs are a favourite and it will also take frogs and lizards.

Breeding in East Africa peaks during dry periods; in southern Africa, it's the rainy season. Courtship involves ‘dancing’ that includes bowing, running and jumping. They also give low booming calls originating in the gular sac. Pairs break off from the group to a wetland where they can establish a large territory for themselves. Copulation is frequent until egg laying begins, which could be a month or more. Incubation doesn’t begin until all eggs are laid so that all chicks hatch at the same time (approx. 28 to 31 days).

Covered in down at birth, chicks can soon raise their heads. At about 12 hours, they can stumble into the water and follow their parents around the shallows. Within 24 hours, they're pecking at objects and eating from their parents. They grow quickly and are soon learning from their parents how to find food. However they don’t fledge until they're past their eighth week - and it could be 14 weeks. They remain with their parents for 10 months, until the next breeding season, when they're driven away. Adult plumage isn't complete until into their second year.

Out of breeding season, grey-necked crowned cranes flock and roost in groups of 20 to 200. Living in such large groups, they need coded displays in order to prevent confrontations from getting out of hand. For example, the strut is an aggressive display towards an intruder. With crown features expanded, it begins a ritualized walk with bill bobbing in time to its steps. It throws in wing flapping, bows, stomps, and growls.

The crouch is the most aggressive display. This is where the bird lies on the ground with its wings somewhat spread, bill pointing forwards. A rush sometimes follows the crouch (the crane springs up and charges with wings flapping). The ruffle-bow is a low intensity threat that involves elevating the feathers and ruffling them until the whole body is shaking.

The dance, usually pair related, has many elements such as flapping, rushing, leaping and gaping, all outlets for aggression. Though displays are instinctual, the context in which they're performed is learned. For example, cranes reared by humans will bond with them and perform towards them. During breeding season, about half of grey-necked crowned cranes form into pairs. The rest of the year, it's only about 10%.

Nests are constructed so that they are concealed in the wetland’s vegetation. The pair tosses grasses and sedges into a haphazard pile, which they trample into a platform while building. By sitting on it, they gradually form a depression into which the eggs are laid. The diameter averages 72 cm while the rim averages 12 cm above the water. This gives them enough height to gaze through the vegetation for any lurking danger. They are very territorial. To frighten off predators, an individual makes itself as large as possible by standing tall and spreading its wings wide. If both mates are present, they slightly overlap wings.

Because of a generalist diet, Balearica regulorum has been able to adapt to the encroachment of humans. They favour farms with manmade wetland like reservoirs and irrigated areas. They also follow cattle since they can feed off the insects as well as frogs and lizards that are stirred up. In fact, sometimes they stamp their own feet. The shortish bill that can efficiently clench an insect, pluck a seed, as well as graze, helps this bird to be drawn towards farms. Though nonmigratory, they move in the dry season if they can't find sufficient food and water. They do not defend their feeding territory.

This species flies with their neck straight and slightly below body level. Legs are stretched out beyond the tail. Not only are they powerful flyers with strong, steady wingbeats, but they take advantage of thermals. However, they do need a run in order to get airborne.

Enabled by a long hind toe that aids the grasping of branches, the grey-necked crowned crane is one of only two cranes that roost in trees. Where there are no trees, they will roost in the wetland itself. Yet, despite so much aquatic activity, their feet are not webbed and they spend most of their water time wading in the shallows. In contrast to their booming courtship call, pairs normally communicate with a mournful ya-oou-goo-lung. Contact calls with their chicks are guttural purrs.

Though grey-necked crowned cranes are able to adapt to human encroachment, humans also present dangers. With a greater demand for food; grasslands and drained wetlands are rapidly making way for farms. As Africa modernizes, groundwater is in high demand for domestic, agricultural and industrial use. Other threats are overgrazing, pesticides, decreased use of fallowing, wetland sedimentation due to deforestation, and dam construction altering wetland plains. Now forced onto farms, cranes are often considered a pest since they eat some crops. So poisoning or shooting are possible. The bird trade is growing too. With its decorative plumage, this crane is a status-symbol pet. As well as being hunted for meat, their eggs provide protein.

Balearica regulorum populations are decreasing through much of its range, which caused the IUCN to uplist it to vulnerable status in 2009. Many groups have become involved in surveys, monitoring and remedial actions. Sustainable alternatives are being introduced to farmers so that birds and mankind can coexist. Reserves are increasing. In some areas, particularly Uganda where it's the national bird, the grey-necked crowned crane is considered sacred and is protected.