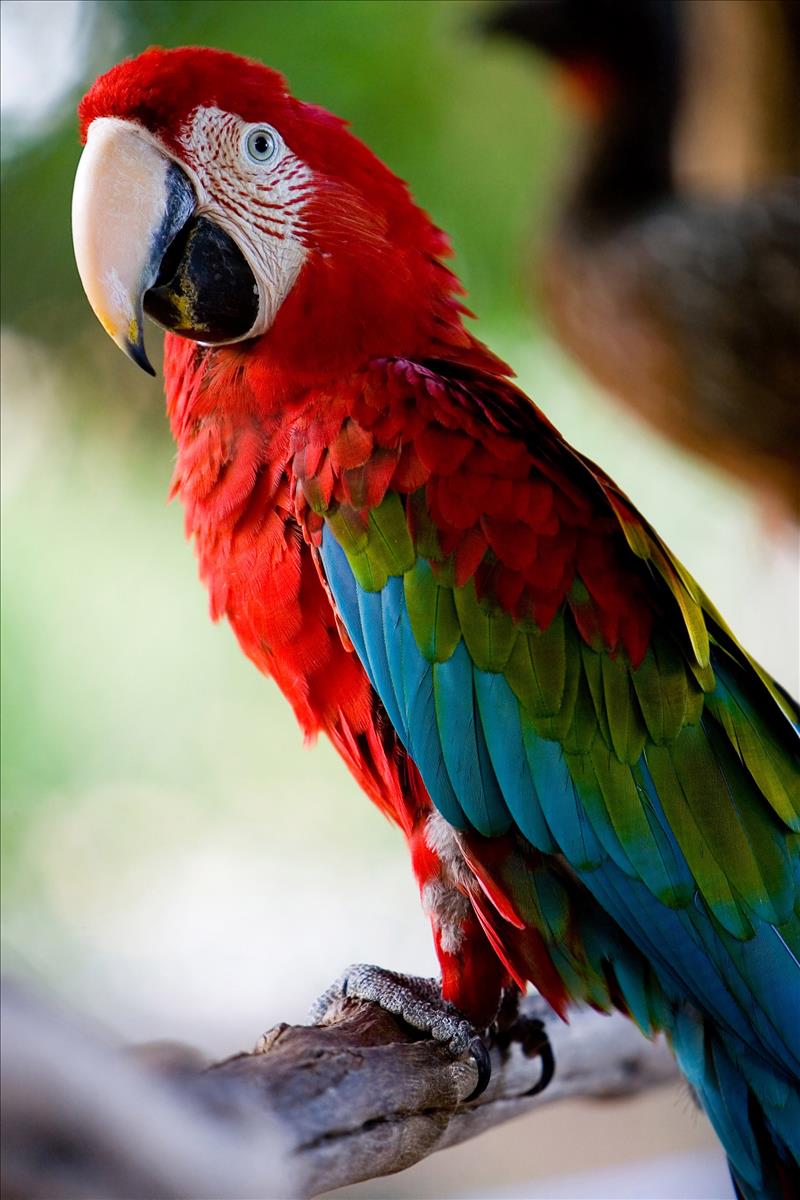 Red is the dominant colour of the green-winged macaw, also known as the red-and-green macaw. Red stretches from the forehead, over the crown, down the neck and onto the mantle and lesser wing-coverts. Green tints the median coverts, scapulars, innermost secondaries and tertials. Blue spreads over the greater wing-coverts and outer secondaries. Light blue covers the back, rump, uppertail coverts and undertail coverts. Dark blue is found on the primaries. From below, with wings spread, all is red except for the undertail coverts, which are light blue. The upper tail's central feathers are red with broad blue tips while the outer feathers are blue. The tapered tail makes up more than half the green-winged macaw's length.

The head features large cheek patches of bare white skin. Traversing the patches in five or six arcs around the sides and bottom of the eyes are small red feathers that look like they have been stitched on. The eyes are pale yellow. The upper mandible is pale coloured with a black triangle that arises from the lower base. The lower mandible is black. Legs are a dark grey. Other than a shorter tail and grey eyes, juveniles are similar to adults.

The green-winged macaw dwells in humid lowland forest including tropical rainforest, riparian woodlands and mangroves. It also inhabits gallery forest penetrating open scrubland. Though it's found up to 1500 metres in mountain foothills, 500 metres is its limit in the lowlands.

Seeds of large trees are its primary source of nutrition. Fruits, nuts, berries, and leaves are also in its diet. They ingest sodium and minerals from clay licks of riverbanks.

During breeding season, pairs of green-winged macaws, which mate for life, split from the group and nest in cavities in the upper reaches of trees. In some areas, cliff crevices are used. The female lays two eggs which she incubates for 24 to 26 days. Down appears on the bare hatchling after eight days. After two weeks, eyesight alleviates its helplessness. Feather sheaths start to appear at about three weeks. The young beg for food by jerking their wings forwards and crying loudly. A parent grabs a youngster's beak at an angle so that it can take food from the parent's crop. Juveniles remain with both parents for about three months, learning to feed and fly. Sexual maturity occurs between three and four years of age. Lifespan is 50 years.

A gregarious species, green-winged macaws roost communally and set out each morning to find food. Winging to their distant feeding grounds, their flight is strong and direct. With streamlined bodies, they can reach 55 km/h. High in the canopy, they eat in the relatively cool morning and late afternoon. Powerful beaks, able to apply up to 2000 psi, crack open the hardest nuts. Messy eaters, they drop a lot of nutrition to the forest floor, which helps reinvigorate the soil. This debris is all that gives away these shy birds since they're quiet and their colourful plumage camouflages them in the foliage. During the hot part of the day, they rest and mutually preen. In areas far from the Atlantic Ocean, they visit clay licks to add sodium to their diets.

With zygodactylous toes (the two middle ones face forwards and the two outside ones backwards); they are the most dexterous of birds, manipulating their toes like hands. For perching and climbing, the toes provide a strong grip. The beak is also used for climbing.

Being a large, heavily feathered bird in a tropical climate, Ara chloropterus requires a high rate of evaporative cooling. The bare cheek patch and the bill serve as thermoregulators with their greater density of blood vessels. When their body temperature increases, the vessels dilate and blood flows in, boosting heat loss.

With a kraw like a corvid, their voice is raucous and high-pitched. They call to mark their territory and locate other macaws. When alarmed, they screech loudly.

Green-winged macaws are early refugees from human intrusion into their habitat. Forests are cut down and they are hunted. Gallery forests are being lost to dams, as well as fires to establish grasslands for grazing livestock.

For every 100 pairs of this species, only 20 to 25 young reach adulthood each year. They dont breed annually; nests are robbed by predators such as boas, hawks, opossums, and rats; humans rob nests and capture adults for the bird trade. However, those seen in the pet trade in the US and Canada are generally captive born whereas those collected in the wild are used for local trade within their country.
Eggs of Ara chloropterus are being taken from nests and the hatchlings hand raised for introduction into areas where populations are extirpated or threatened.