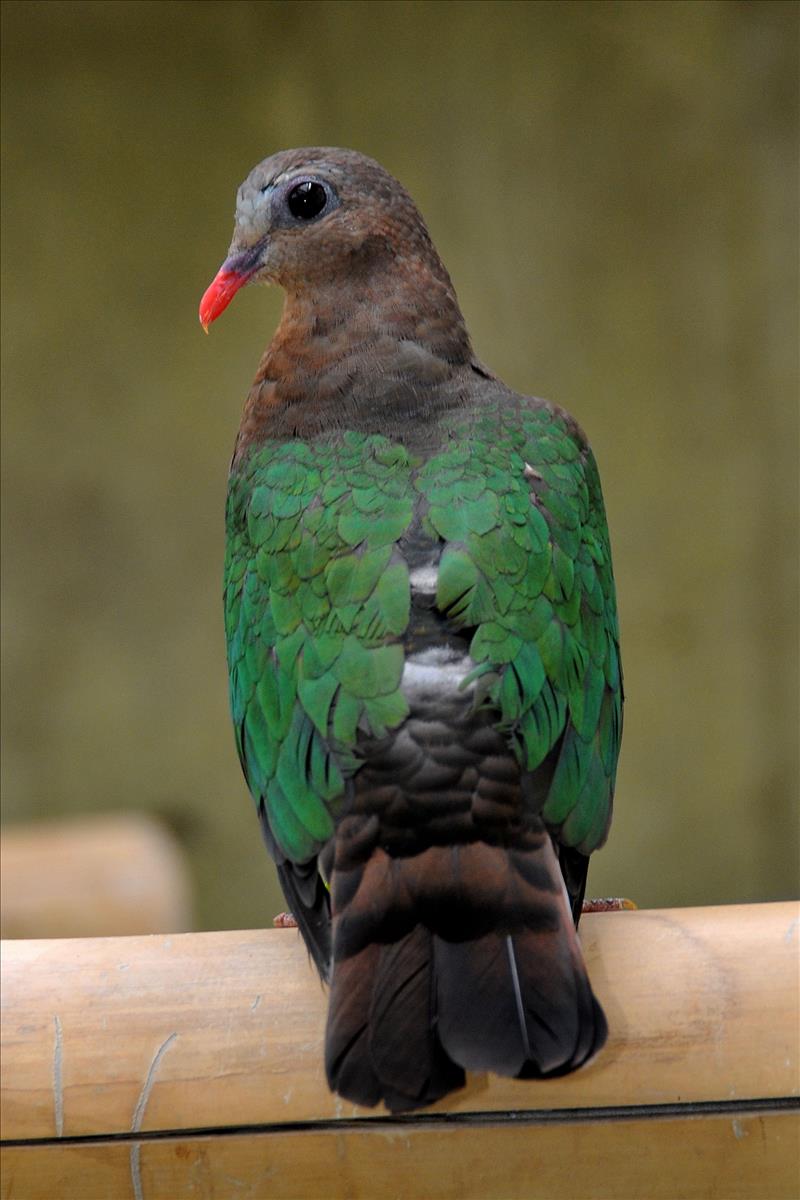 An iridescent emerald green covering the mantle, scapulars, wing coverts and inner secondaries makes this bird stand out. In contrast, the primaries and outer secondaries are slaty black. When the green-winged dove takes off, it exposes a buff underwing with chestnut flight feathers. A white patch is featured on the male's shoulder. Two black bands interspersed with two grey bands cross the lower back, providing a good identifier. The rump and uppertail coverts are dark grey. The central tail feathers are greyish-black, while the outer ones are blue-grey. The tail ends with a broad black subterminal band tipped in grey. The crown and nape are bluish-grey. The rest of the head and the underparts are a dark vinous pink. The bill is orange-red with a purplish base. A purplish or flesh-colored orbital skin surrounds a dark brown iris. Legs and feet are red or pink.

There is sexual dimorphism. The female lacks the white patch on the shoulder. On her head, grey is restricted to the forehead and eyebrow. Instead, her head is brown as are the neck and underparts.
The juvenile has reddish-brown scalloping with blackish bars. It gradually grows into adult iridescence.
This species is also known as the emerald dove.

Primarily in wooded areas like rainforest, gallery forest and mangroves. However increasingly found on cultivated land. In Australia, they are sometimes located in more arid areas. They have been observed up to 1500 m.

Eats figs plus other fruits, grass seeds, other seeds, rice, and wheat. They will supplement with invertebrates like termites, snails, and insects.

Male performs a courtship dance: he depresses the head and back, raises closed wings and tail over the back creating a splendid show of his green plumage, while cooing loudly and bobbing. Prospective parents build a scanty nest of interlaced twigs and leaf litter. They locate the nest in bush, vines, ferns, or tree ferns, one to five metres off the ground. Two eggs are laid, but only one hatchling usually survives. Both parents incubate for two weeks. At birth, the young are altricial (weak, blind, naked, immobile and unable to maintain their own body temperature). They fledge at 12 or 13 days.

These doves are ground-dwellers. Almost tame at times, they can often be found on forest tracks, in clearings, campsites, gardens, or parks. Primarily they use trees to roost and nest. They will fly to escape danger though they are just as likely to walk nimbly into ground cover. With their greenness, they are difficult to find in a forest.

Though it is a reluctant flier, flight is strong and swift. Because it flies low, Chalcophaps indica has adapted by becoming a good weaver, dodging trees with apparent ease. It takes off with a clap of the wings, which then beat continuously.

Like all pigeons and doves, this dove is primarily frugivorous. Unlike most frugivores, this species destroys seeds in the feeding process so that it is not a seed disperser. They are solitary feeders, going so far as to territorialize in food-rich areas. When it chases off other birds, it lifts its wings to show off the white patch on its shoulder.

Instead of a preen gland, it has specialized feathers scattered over its body which disintegrate into a powder that helps clean and lubricate the other feathers. All pigeons and doves have a special gland that allows both sexes to secrete a thick milky substance into the crop. The chicks feed by probing into the throat. This relieves the pressure on the parents to be constantly foraging for food. The chick has a boat-shaped lower bill to aid in gathering the milk. A grey spot on the nestling's bill is a stimulus for the parent to regurgitate foraged food. Both parents lack a brood patch. This dove's call is a series of six or seven moaning coos. It also emits a nasal hoo-hoo-hoon.

Because of its iridescent green coloration and its soothing call, Chalcophaps indica is often trapped and sold as a cage bird. With its low flight, it often flies into windows, white walls (which it sees as clearings) and wire fencing. On Christmas Island, C. i. natalis is endangered due to an introduced species – yellow crazy ants, a devastating invader. Not only are they predators of hatchlings, but they have caused numerous large changes to the ecology of the island, endangering other species. Still, it is widespread and common throughout most of its range.