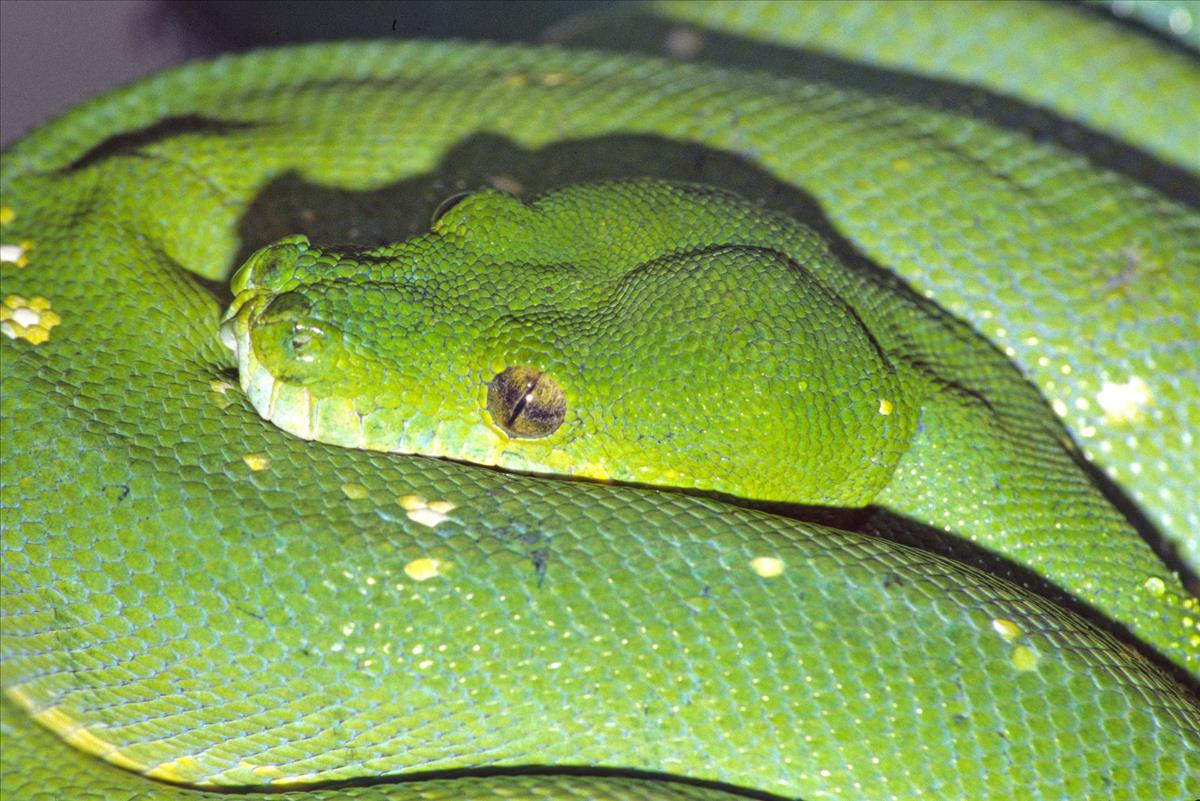 Adult tree pythons have variations in colour and pattern. They are bright to emerald green above with the belly a cream to light yellow. They have a complete or broken series of white or yellow scales along the vertebral line. Spots of the same colour may be scattered over the body. The tail tip is a bluish colour.

They have a slender, laterally compressed body. The head is diamond shaped and the head scales are irregular, numerous and finely granular. The pupil is vertical. They have three thermosensory pits (on each side) in the upper lip that are located at the very front of the face (and facing forward). They then have another five in the lower lip that are located beneath the eye and facing more so outward (but are still slanted toward the front of the face).

Juveniles are bright lemon-yellow, gold, red or orange, often with a dark purplish-brown, white striped streak through the eye and a vertebral stripe of the same colour, with short bars of brown extending out from the vertical line. The change from the juvenile to the adult colour may be completed by one year old. Their size ranges from 1.2 - 2.2 metres.

Found in New Guinea, Solomon Islands, Aru Islands and in the very north of Australia.

Morelia viridis inhabits tropical jungles, bamboo thickets, rain forests, and monsoon forests where vegetation is thick and the climate is very humid (80 - 95% humidity) and warm (28 - 35 ˚C), from sea level up to 2000 metres. It can be found however, also at forest margins and in secondary growth, bushes and shrubs, occasionally even in gardens and hedges that surround buildings. It is primarily an arboreal snake and can be found mostly in trees as high as 30 metres above ground, but occasionally also on ground.

After reaching sexual maturity at two to three years of age they begin to look for sexual partners. If the female meets several males, several matings are possible with different partners. Adults possess a pair of cloacal spurs, one on either side of the vent, larger in males than females. These are the external parts of the vestigial hind limb and pelvic structures.

Copulation occurs when the pelvic spurs are used to anchor the male genital organs to the female cloaca. The male has two intromittant organs, called hemipenes but only one is engaged during mating. After successfully mating the females stop eating and begin looking for nesting sites. These are predominantly hollows situated high in trees, but also include hidden sites that offer protection from enemies and enough humidity.

The size of the clutch depends upon the size and age of the female. The number of eggs deposited can range between 5 to 25 (up to 35) eggs. Like most python species, the green tree python protects and incubates her eggs. The female wraps her body around them and uses muscular shivers as a means of keeping or even increasing her body temperature, thus producing and keeping an incubation temperature of 29.5 ˚C. If the temperature is too high she loosens the body loops. Hatching occurs 45 - 65 days after the eggs are deposited. Since in principle matings, egg depositions and hatchings may happen any time of the year, in this non seasonal snake this means that young can be seen any time of the year. They are about 30 cm long and have very striking colours. Hatchlings from the same clutch may have different colours. They are independent from birth, moving off into the forest on their own. Over the next six to twelve months their colour changes into the typical green. This phenomenon is referred to as ontogenetic colour change.

They are an arboreal snake, the tail being strongly prehensile. Prey is captured by holding onto a branch using the prehensile tail and striking out from an s-shape position. They also entice their food by lying very still on a branch and dangling their bluish tail as a lure. When the prey, curious about the wiggling tail, gets close enough, they strike.

Adults have strong dentition with teeth up to 2 cm. The enlarged front teeth assist in catching and holding prey. The ability to expand its mouth along with the extensile skin allows the snake to ingest prey with a diameter greater than that of its own body. They have a particular way of resting in the branches of trees: they loop a coil or two over the horizontal branches in a saddle position and place their head in the middle.

The heat sensitive pits along the jaw help them notice changes in temperature, with which they are able to detect infra-red heat from warm-blooded animals. Nocturnal green colouring is good camouflage; it is also a helpful tool in minimizing predation, as they tend to blend well with trees and bushes in which they rest during the day. They spend most of their lives in the trees but are not exclusively tree-dwellers. On occasion they hunt on the ground.

Forest clearance and over-collection. The largest threat to the species is habitat destruction, particularly in the Indonesian (western) part of New Guinea, which is being logged. They are also under pressure from hunting; for food and for the skin trade.