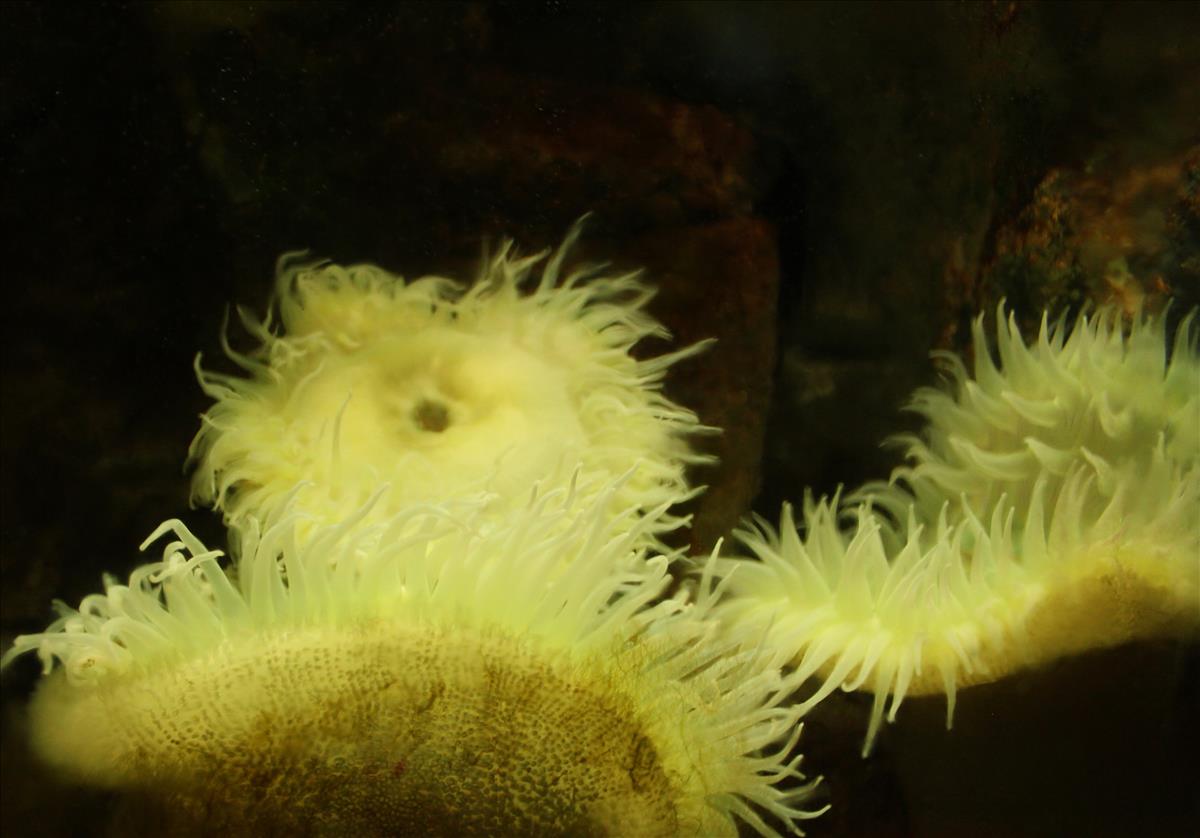 The green surf anemone, also called the giant green Pacific sea anemone, is not a plant, it's an active predator. It can grow up to 30 cm in diameter and its column can reach as tall as 30 cm. The color of the column is olive green. On the bottom of the column is the pedal disc, a sticky ‘foot’ used to adhere to various surfaces. The disc also allows the anemone to move around if conditions are not ideal. The disc can be green, grey, brown or blue. Atop the column is the mouth/anus (one opening serves both functions), which is surrounded by six or more rows of tentacles. The short, thick, light-green tentacles are tapered at the ends. The anemone’s green colour comes from algae living in its tissues. In areas where little sunlight reaches the anemone, such as caves, the algae are absent, and the anemones are white.

These anemones are found in cold waters from Panama, up the Pacific Coast, and into Alaskan waters.

Giant green anemones are found in colder waters on vertical rock walls that are shaded, sand and rock covered shore lines, surge channels and tidal pools. They are found solitary or in small groupings, and often near mussel beds (one of their food sources).

They eat urchins, small fish, crabs, and dislodged mussels. When suitable prey brush past its tentacles, microscopic barbs shoot out into the animal’s body, paralyze it, and then draw it back into the anemone's mouth.

These anemones reproduce sexually. They broadcast eggs and sperm into the water, where they meet and fertilize. The larvae then settle in the inter-tidal areas where they spend the remainder of their adult lives. They can live a long time. In captivity they have been known to live for 75 years.

This sea anemone has a special symbiotic relationship with an algae living in its tissues. Through photosynthesis, this algae, called zooxanthellae, provides nourishment for the anemone. Under strong sunlight the algae is encouraged to grow and the sea anemone gets very green. When the anemone lives in more shaded areas the algae growth is inhibited. Then the anemone is less colourful, sometimes being almost white.

The tentacles surrounding the mouth are covered with millions of cells called cnidocytes. Cnidocytes that sting are called nematocysts. Each nematocyst contains a small vesicle filled with toxins, an inner filament and an external sensory hair. When the hair is touched, it mechanically triggers a cell explosion, and a harpoon-like structure erupts and attaches itself to the organism that triggered it, injecting a dose of poison in the flesh of the aggressor or prey. Disabled, the prey is then swept into the anemone’s mouth where it is consumed.

Because an anemone has only one opening in its gullet, downward-pushing, hair-like cells called ‘flagella’ act to force food and oxygenated water into the gastrovascular cavity for consumption. Similarly, upwards-pushing flagella force carbon dioxide and other waste products out.

The green surf anemone has proven to be very useful to the medical community. A drug has been derived from the animal’s tissues that is effective in fighting heart disease.

They are prey to certain species of sea stars, sea spiders, sea-slugs and even a species of snail that feeds on the anemone’s tentacles. According to many scientists, global warming will cause rising sea levels. If this occurs, it may pose a serious threat to anemones and all other organisms that live in very specializes habitats, such as tidal zones.