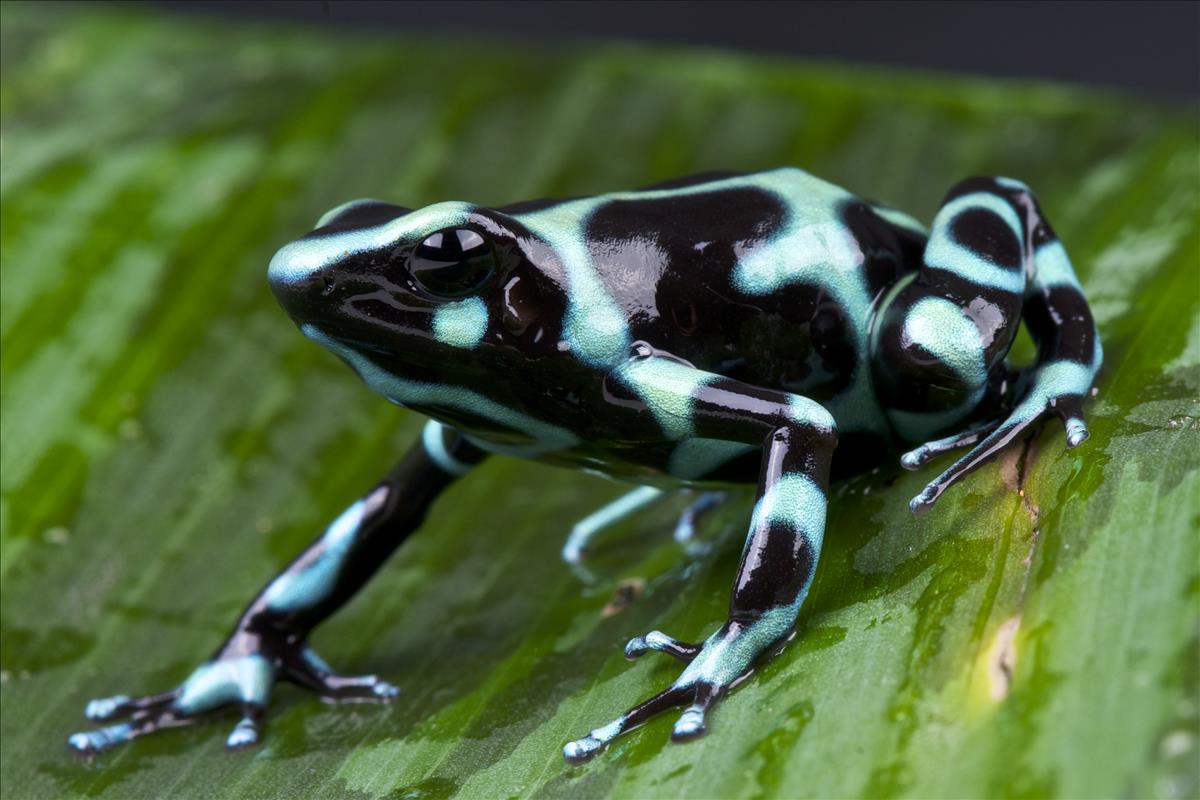 These frogs are small, usually colourful and quite slender. Most are green with black in bands or spots. The skin contains numerous poison glands. Length: 2.5 to 5.0 cm. Characterized by a pair of plate-like scutes on the upper side of each finger and toe.

Central and South America, from Nicaragua and Costa Rica to southeastern Brazil and Bolivia. They were introduced to Hawaii by humans and have flourished there.

Small insects, such as ants. Ants have high quantities of toxic compounds in their tissue. These alkaloids provide the precursors to skin toxins which are formed when the ants are consumed by these frogs. This makes the frogs unpalatable to predators. When the food source does not have these alkaloids, the frog will lose this poisonous feature.

The mating season of D. auratus occurs throughout the entire rainy season of the rain forest, from mid-July through mid-September. Male frogs go through an elaborate ritual to attract mates. The males first fight among themselves to establish territories, which are then fixed for the remainder of the mating season. The male then attracts a female with vocalizations consisting of trilling sounds. Part of the mating behavior involves the frogs rubbing against each other. Once the courtship ritual is completed, the female deposits up to six eggs under leaf litter. The eggs are encased in a gelatinous substance for protection. These eggs will develop into tadpoles over a period of two weeks while the male continues to occasionally check on them. The young feed from the yolk sac of the egg.

Once the tadpoles hatch, they climb onto the male’s back and he carries them to a place suitable for further development, such as a water filled hole in a tree or plant leaves that hold water. For the duration of this trip, the tadpoles are attached to the males back by a mucus secretion, which is soluble only in water so that there is no chance of them accidentally falling off. Once they are at their final destination, the male immerses himself and the tadpoles in a water source and they float off independently. The tadpoles are now on their own. They take an additional six weeks to develop into adult frogs.

Their bright colours are warnings to other animals of skin toxins. The poison allows them to be diurnal unlike most other frogs that are nocturnal. The practice of the male carrying the eggs on his back cuts down on the amount of time the offspring spend as defenseless eggs and tadpoles in waters that teem with predators. As a result, these frogs can make do with fewer but larger eggs, which supply more yolk for each developing embryo.

These frogs, due to their warning colouration, live a much safer life in the hazardous jungle than other frogs. However, they are over collected for the pet/zoo market. Also extensive jungle clearance destroys the humid understory they require.