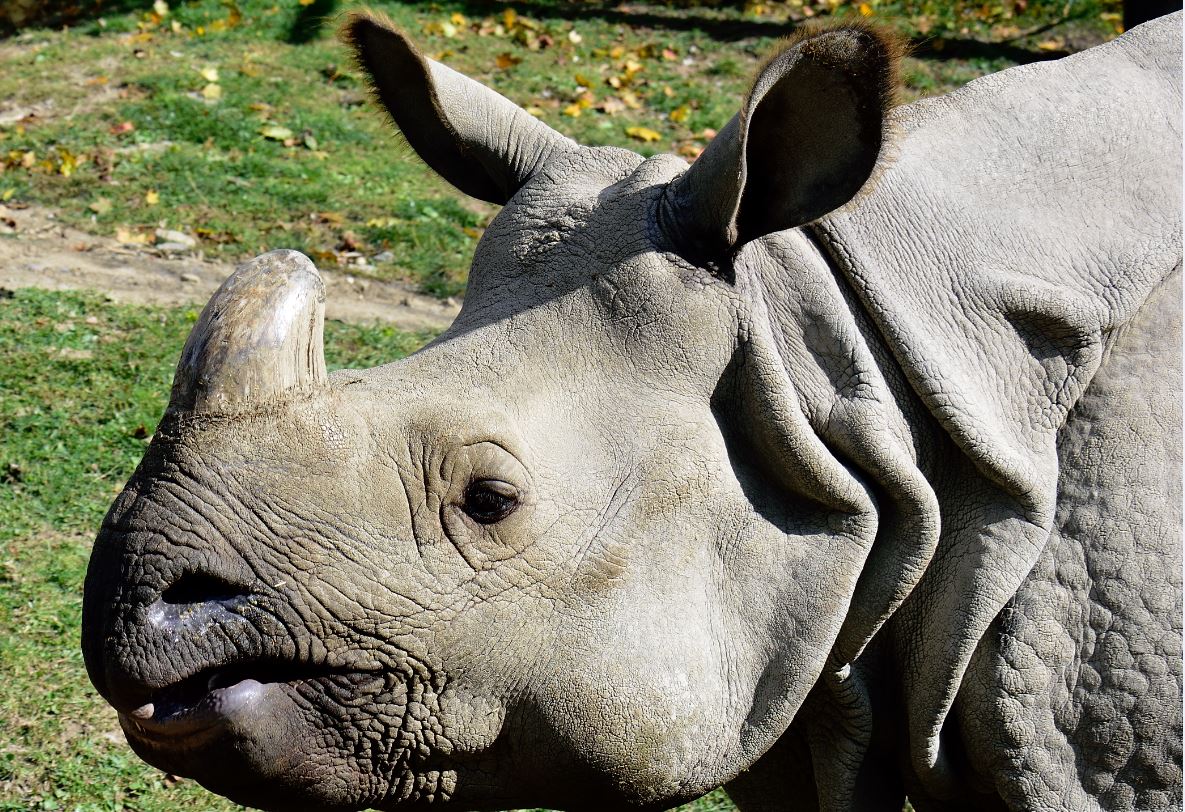 The Greater one-horned rhinoceros has a thick, dark-gray hide, pinkish in the skin folds, and is covered or studded with many small tubercles. The folds on the body resemble a heavy plated armour coat. The skin falls into deep folds at the joints; prominently located in front of the shoulder, behind the shoulder and in front of the thigh. Males show enormous development of the neck folds. The tail is set in deep grooves of the armour. Body hair is visible as a fringe on the end of the ears and the tip of the tail, as well as the eyelashes. The upper lip is pointed and prehensile. It has a single large horn, present in both sexes. It consists of keratin - a protein present in human hair and nails - and can grow from 20 to 60 cm in size. Adult male rhinos have the largest horns. Rhinos are usually solitary animals.

Jungle and alluvial plain grasslands are primary habitats. It is found in marshy lowlands. Tall grass, thick forests, and swamps are preferred. The rhino spends a significant amount of time during the day, wallowing in mud or marshy pools.

The diet consists mainly of grass and also includes fruit, leaves, branches from trees, and shrubs.

Breeding occurs throughout the year. Bulls monitor urine and fecal deposits for evidence of females in estrous. Males fight over territory and the dominant bulls mate. They pursue the females and some fighting does ensue. Females come into estrous every 21-42 days. Gestation lasts 462-491 days (approx. 16 months) and a single young is born between the end of February and the end of April. At birth, the calf weighs 40-81 kg, head and body length is 1-1.2 m and the calf measures 56-67 cm to the shoulder. The interbirth interval can be as short as 22 months, but usually is two to four years. During the first weeks after giving birth, mother rhinos produce 20-25 litres of milk daily. Young rhinos nurse for two years. The horn appears after one year of age. Calves live with their mothers for several years. Females are full-grown at 6½ years and males at about 10 years. Rhinos reach sexual maturity at six to eight years of age.

They are crepuscular. Activity takes place mostly in the early morning, late afternoon and evening. The middle of the day is commonly spent resting in shade or in mud wallows. Wallowing and bathing occur in lakes, rivers, and pools. They wallow in mud to protect their skin from the sun. This behavior is important for thermoregulation. The mud also creates a barrier to at least some biting insects and skin boring parasites. Rhinos have small eyes, positioned on either side of the head, limiting their sense of vision. However, they have a good sense of hearing, and can swivel their ears to focus on a sound. They have a very good sense of smell. Rhinos drop dung in well-defined communal piles. These act as signposts or territory markers. Using their well-developed sense of smell rhinos can read these piles much like a newspaper is read. Urination spots and rubbing sticks are also olfactory markers. Animals of all ages and both sexes defecate at these communal dung heaps. The prehensile upper lip helps when feeding or browsing on tall grasses and shrubs. Although herbivores, they have well-developed incisor teeth and two long canine teeth in the lower jaw. These tusk like teeth are used in self-defense. They usually seek to escape rather than attack an enemy and can run up to 55km/h for short distances. When wounded or when with calf, they occasionally charge. The horn is used as a threatening display to other rhinos or intruders. There are 10 distinct vocalizations, including a snort for initial contact and a honk, bleat and roar heard during agonistic interaction.

The pressure of human populations on the last remaining habitats of the rhinoceros has resulted in it becoming an endangered species. Poaching for its horn, which is believed to be a powerful aphrodisiac, continues. Their blood and urine are also believed to have magical medicinal powers. Rhinos are susceptible to hoof and mouth disease from domestic livestock. Tigers are natural predators of calves.