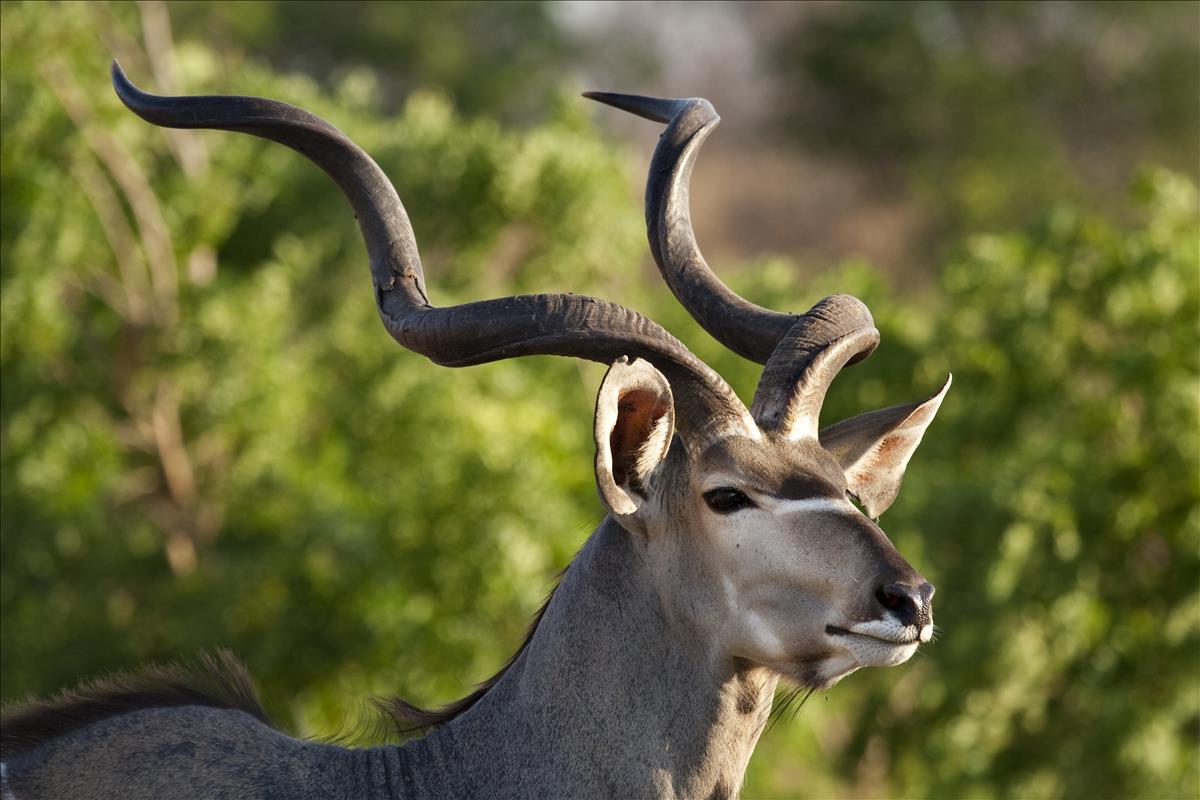 The greater kudu is the second largest of the antelopes, the eland being the largest. Kudu show strong sexual dimorphism. The curved horns of the male are this species most impressive feature, growing up to 180 cm with at least two and a half turns, compared to one and a half turns in related species. The average length is 120 cm with a record of 187.64 cm. These long spiraled horns slant back from the head. The young male horns begin to grow at 6 - 12 months of age, twisting once at about two years of age and reaching two and a half twists at about six years of age, which is when the horns grow to their full length. Females do not have horns. Bulls also attain much larger sizes than cows, and have a tasseled dewlap.

The short, smooth coat is a reddish-sandy colour which may turn to blue-grey in old males. The head tends to be darker than the rest of the body. White cheek spots and a white stripe are located across the nose, just below the eyes. There is an erectile crest on the neck and shoulders, and a mane along the throat. Ears are large and cupped shaped.

They are tall, with a narrow body and long legs. Approximately four to twelve white stripes run vertically on the flanks. The bushy tail is black tipped and white underneath. The upper legs have black garters.

Mainly found in open woodlands with scattered and dense brush, and along the wooded banks of dry riverbeds as the species requires adequate cover for concealment from predators.

Greater kudus are browsers. They feed on grasses, leaves of trees and shrubs, herbs, fallen fruits, bulbs, tubers, flowers, succulents, and in cultivated areas, hedges, prickly pear, and castor-oil plants. Occasionally they will use their horns to break branches. They get water from water holes or water contained in their food (i.e. in bulbs, and wild watermelons), and may travel long distances in times of drought to find water.

The mating season occurs at the end of the rainy season, which can fluctuate slightly according to the region and climate. Bulls only associate with cows during the mating season. During the rut (May to early July) one to two socially mature bulls accompanies each family group. At this time the necks of the mature males swell to display their bulging muscles and aggression between males is common. When rival males meet, one stands with his mane erect in a posture that best exaggerates his size, while the other circles around. These displays can sometimes develop into fights with one male locking his strong, spiral horns around the body of his opponent.

Before mating, there is a courtship ritual which consists of the male standing in front of the female and often engaging in a neck wrestle. The male then trails the female while issuing a low pitched call until the female allows him to copulate with her. Gestation takes around 240 days (or eight months). Calving generally starts between January and March, when the grass tends to be at its highest which extends through April and May in South Africa. The female will leave the herd just before giving birth to one calf weighing about 16 kg. Calves are able to stand and suckle 45 minutes after birth. She will stay with the calf the first day, then return to the herd, coming back to suckle the calf three to five times per day. Mothers will consume a calf's waste up to 18 days after birth to lessen the risk of detection by predators. The young remain hidden in the tall grasses for 14 - 18 days and then join the herd with the mother. They are weaned by six months. Calves will stay with the maternal herd for up to two years. Greater kudus reach sexual maturity between one to three years of age. They may live 20 years or more in captivity.

Greater kudus are sociable animals with groups of females and their offspring of both sexes mingling and separating frequently. Cows form lasting social bonds with other cows. Herds tend to be small as finding food for a large herd would be difficult. They are not territorial, although they do have 'home' areas. Maternal herds have home ranges of approximately 4 square kilometers which overlap with those of other groups. Home ranges of adult males are about 11 square kilometers, and generally encompass the ranges of two or three female groups. The larger males roam more widely and form loose bachelor groups, generally only joining female herds during the mating season.

Greater kudu may be active throughout the 24-hour day. They are most active at dawn, dusk and during the night. They spend about 54% of their time foraging. The large ears are extremely sensitive to noise. They have a wide repertoire of vocalizations, including barks, grunts, hooting bleats, and a strangulated whimper. Males are more vocal than females – they grunt, cluck and hum. Females have an alarm bark and mother/infant calls.

Their coat pattern gives them excellent camouflage while resting under the overhang of trees or shrubs. When aware of a predator they will freeze if concealed by a thicket. When startled however, they flee with large jumps, with their tails rolled upwards and forwards. They take off at speed, head held up, and horns lying at shoulder height to avoid catching in vegetation. Despite their large size, kudu are accomplished jumpers, with records of heights of over 2.5 metres over objects in their flight path being cleared with ease. They do not have the stamina or speed to outrun predators on open ground, thus depending on leaping over shrubs and small trees. They are also very nimble in the hills and rocky areas.

Predators include lions, leopards, Cape hunting dogs, and cheetahs. Humans hunt them for their meat, hides, and horns. African tribes also use the horns as honey containers, musical instruments, and ritual symbols. Their habitat is disappearing due to agricultural development (deforestation) and they are susceptible to rinderpest (cattle plague, a viral disease) epidemics. They are sparsely populated in most areas.