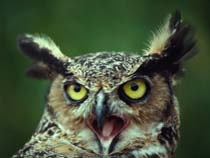 Plumage is usually brown to grey-brown in colour and is heavy and soft. However, colour varies according to geographical location (e.g. dark in Labrador and British Columbia and lighter in the Northwest Territories and northern Prairie Provinces). The great-horned owl has a barred stripe pattern on its undersides and a white bib on its throat area. It has prominent, widely spaced ear tufts and large yellow eyes set in a wide facial disk. The strong beak has black mandibles. The owl has long, sharp, black talons, and feathers covering the legs. The great horned owl is second in size only to the snowy owl. Males weigh 1 – 1.5 kg whereas females weigh approx. 2 kg. Great horned owls reach a height of 63cm with a wingspan of 1.4 m.

From Arctic North America, to Central and South America, except for the Caribbean Islands.

Forests, deserts, open country, swamps, and even city parks. They are year round residents as long as prey is available.

They consume a wide variety of prey; medium size mammals and birds including rabbits, skunks, birds, insects, mice, and game birds. They are also known to eat other owls, and can catch prey two to three times their own weight. The great-horned owl is an opportunistic hunter and will sit and watch for prey or glide over the ground to catch food, or if it is desperate, consume carrion.
Pellets: They take their caught prey to a feeding roost to eat. The owl digests most of the prey and regurgitates a pellet of hair, bone and any other indigestible parts of the prey. The food pellets are quite large from 7.6 to 10.2cm in length and 3.8cm in width. Pellets are regurgitated on a regular basis.

Pairs mate for life. They first breed at two years of age. They are one of the first to nest, laying eggs as early as late January when there is still snow on the ground. Usually two or three pure white eggs are laid in the unused stick nest of a hawk or crow, or sometimes on the ground. Incubation, by the female lasts about one month. Both parents defend the nesting site. The young are similar in coloration with the adults, although their barring and dark markings are not as crisp and defined. Ear tufts are smaller or not apparent. It also has a screech similar to a barn owl for a call. Young owls are almost fully feathered and capable of short flights at around eight weeks of age. However, they are still largely dependent on their parents for food during most of the summer. Subsequent parent care lasts for up to 5 months. The great horned owl has a maximum recorded longevity record of more than 28 years.

The voice of this owl is a series of low, far-carrying hoots, often heard at dusk and at night. It is a deep, resonating hoot, usually in a series of five (hoo, hoo hoo, hoo, hoo).

Eyes: Owls have highly specialized eyesight, capable of using every scrap of light to the best advantage. The huge eyes are set forward in the skull to provide overlapping binocular vision which is 50 - 100 times more efficient than our own at distinguishing small objects in dull light. The eyeballs, shaped like tapering cylinders, provide the largest possible expanse of retina, but lack mobility (they can not rotate up, down or sideways). The owl can turn its whole head as much as 270 degrees. Owls are able to hunt in daylight because of the exceptional pupil size, controlled by the iris. The nictitating membrane is opaque which is unique in birds.

Ears: Owls have acute hearing and can hunt by sound in total darkness. Instead of small, round openings, owls have long vertical slits. The facial disc throws sound waves to the ears located immediately below. The edges of the facial discs are fringed by short, stiff feathers bordering the openings and carried upon flaps, front and back which can move to control the size of the ear opening. This control allows owls to scan different parts of their environment for sounds, the way mammals can move their ears. The skull of an owl is wider than most birds and this helps them locate the direction of a sound. The right ear opening is higher than the left and this exaggerates the effect of displacement of the sound to one side or the other. These specialized ears are ideal for detecting the high pitched squeals of rodents.
Flight: Owls have evolved the ability to fly in almost complete silence. Their feathers have softened edges and the birds are light in relation to wing area and so have effortless flight and no need for noisy flapping. The usual descent of an owl on its prey is a glide.

Digestion: Owls usually swallow their prey whole. Strong stomach juices dissolve the flesh while the indigestible bones, fur and teeth are compacted into pellets which the bird regurgitates after about 8-12 hours by stretching its neck and opening its bill wide.

Feet: Owls have long, sharp claws and the outer toes are reversible and can be pointed backwards. The legs and toes are feathered. This may provide protection against possible bites from prey.

Multiple studies show post-fledging mortality for the great horned is very high especially in the first two years of life. Natural causes include parasitism, disease, and starvation. Unfortunately the major causes of death are related to mankind, with 52 - 86% of deaths in some banding studies caused by shooting and 19% by trapping (96% potentially intentionally caused by man). Other studies show 21% shooting deaths, 15% trapped, 20% hit by cars, and 7% electrocuted. Road kills, pesticides, illegal shootings, and electrocution are major causes of death in North America.