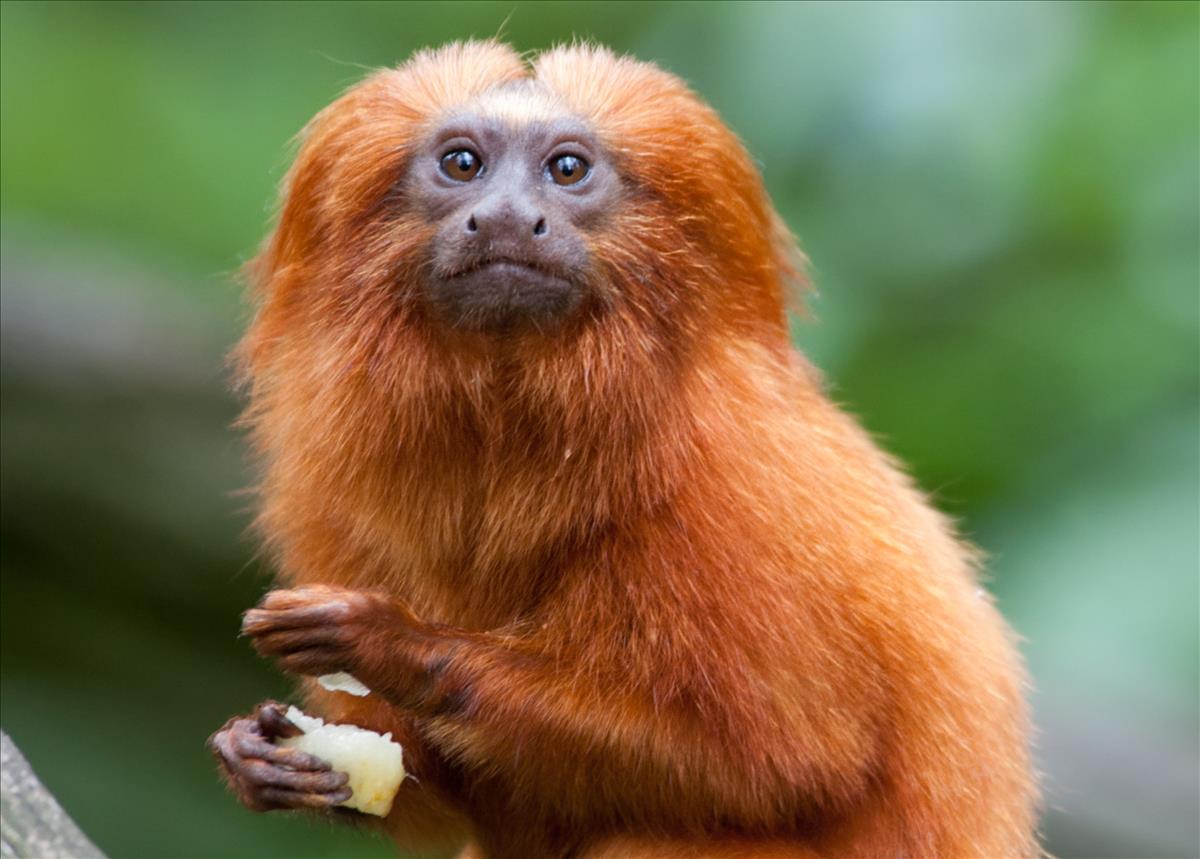 Golden lion tamarins have bright orange or red fur over their entire bodies, including long hairs that form manes on their cheeks, throat, and ears. Their faces are dark and hairless.

Tamarins, like their close relatives, the marmosets, are distinguished from the other monkeys of the New World by having modified claws (rather than nails) on all digits except the big toe.

They do not exhibit sexual dimorphism, meaning that there is little difference in appearance between the males and females. They are among the smallest New World primates, with an average head and body length of 200 - 336 mm, and a tail length of 315 - 400 mm. They weigh from 361 - 794g.

Primary and secondary lowland forest from sea level to 300 m. This species usually lives at a height of three to ten metres in the trees. Golden lion tamarins are an adaptable species. If sufficient food sources, foraging sites, and tree holes (used as sleeping sites) are available, they can survive in degraded and secondary forests as well as partially cultivated areas.

Males reach sexual maturity at 24 months; females at 18. They are seasonal breeders and generally, only one female per group breeds during a particular breeding season. Birth (usually twins) occurs from September to March. Tamarins (and the closely related marmosets) are the only primates that normally have twins. Gestation period averages 128 days. Two days after birth, the father begins to carry the infants on his back, returning them to the mother every few hours for feeding. Lifespan is 14 years.

Diurnal, sleeping at night in tree holes and occasionally in vines. Arboreal lifestyle, tamarins are able to leap from branch to branch with great agility. They have acute sight, good hearing and a good sense of smell. They have several different vocalizations. The most common are a shrill whistle, chirring, descending trills, whines, and clucks.

As well, they have long fingers and hands, which allow them to forage for prey efficiently in nooks and crannies. They have modified claws (rather than nails) on all digits except the big toe, allowing them to cling to vertical surfaces, and assisting them in locomotion.

Golden lion tamarins live in extended family groups of usually four to eight individuals, and they will act together to protect their range from other tamarin groups.

Tamarin populations have declined largely because of fragmentation, or total loss of habitat due to destruction of the rain forest for lumber, agriculture, pasturage, and settlement. Up until the 1960’s this primate was also exported for use in laboratories; for the pet trade; and for zoo exhibits. By 1983 their numbers had dropped to 100 - 200 individuals. Through captive breeding in zoos, this monkey has been returned to the wild in monitored areas. Today, the population is thought to be around 1,000 animals. It has been estimated that-although approximately 2,000 animals are required to maintain a stable population, the current available habitat will only be able to support about 1,500 animals (IUCN). Habitat restoration projects now in progress will, in all likelihood, correct this situation.

Invasive alien species of plants, either accidentally or deliberately introduced, displace native species and create monocultural areas (cultivation of a single crop or product without using the land for other purposes) in which the tamarins cannot survive.

They are still hunted and sold into the pet trade, even though such practices have been illegal for several decades.