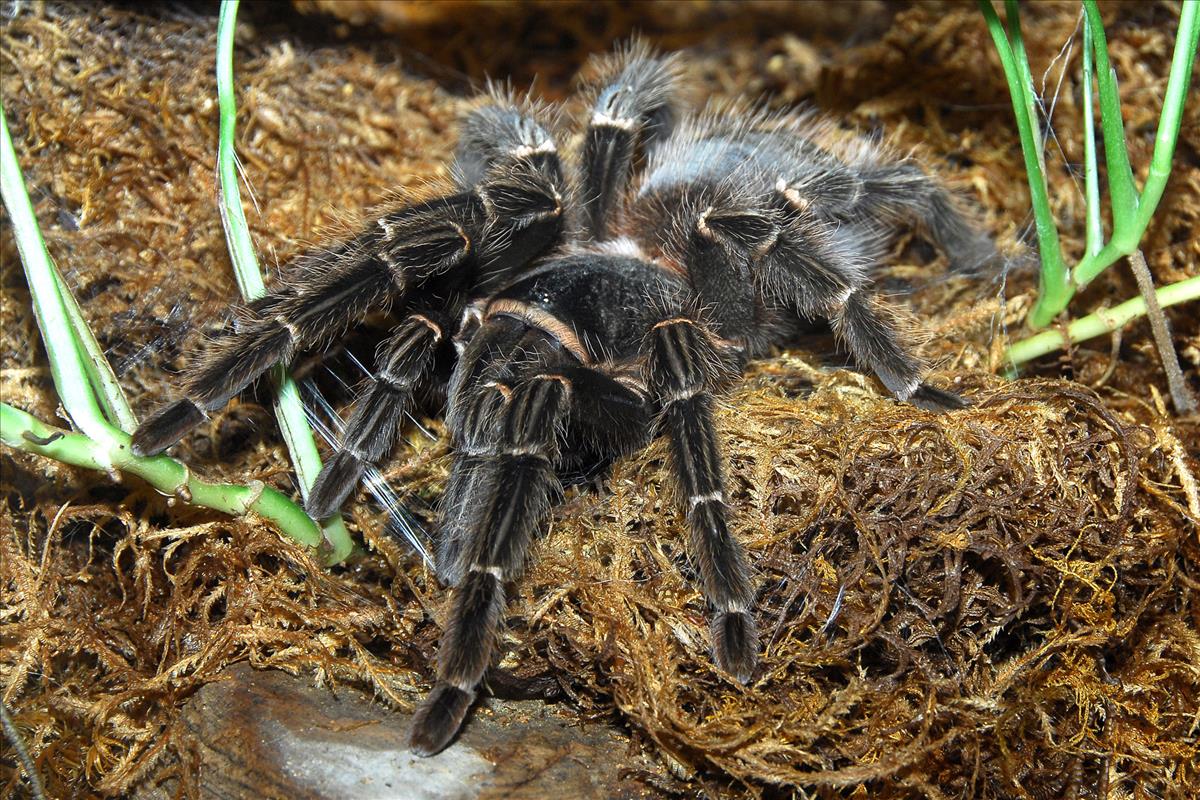 This is one of the world’s largest arachnids. The body is made up of the cephalothorax, the abdomen, and eight legs, all of which are covered with long, partially pink or salmon-coloured hairs. Like all invertebrates, the body is composed of an exoskeleton which the spider sheds often when young, and then approximately once a year as an adult. The two hollow fangs, located at the end of the chelicera, transmit the venom. Although this spider has eight eyes, its eyesight is very poor, and can only see the differences in light levels. Instead, the spider uses the sensory hairs covering its body to navigate and detect movements. This tarantula also has a pair of pedipalps, or feelers, located beside the chelicera, which are used for food manipulation, sensory, and reproductive activities.
Weight: up to 85g.
Leg span: up to 20.32 – 25.4 cm.

Terrestrial spider, who lives on the floor of the tropical forests.

Will eat just about anything smaller than itself, such as large crawling insects and other invertebrates, small rodents, lizards, and frogs. They will, on occasion scavenge. Regardless of its name, the spider is rarely seen eating birds however it does occasionally attack the newly hatched chicks of ground-dwelling birds.

This spider is solitary, and only comes in contact with others of its species during mating. Males can be distinguished from females by the mating hooks located on the first set of legs. Females also tend to be larger. Once the male is sexually mature, he will spin a small area of silk, onto which he deposits his sperm. He then sucks the sperm up into his pedipalps (feelers), and heads out in search of a willing female. If he finds a receptive mate, the male uses his mating hooks to restrain the female’s fangs, and proceeds with copulation by injecting the sperm into her genital openings with his pedipalps. After mating, the male must make a very fast retreat, or be killed by the female, becoming one of the almost 50% of males that will not survive mating. Tarantulas do not spin webs, but do produce silk. The female lays up to 2000 eggs in a thick, silken sac, approximately three months after breeding. She will guard this sac fiercely, and incubation lasts approximately three weeks, after which time the white spiderlings are born. Females will guard offspring for several months. Young are voracious feeders, eating lots and often. As a result the babies grow very quickly, up to 15.24 cm in the first year. Females can live up to 15 years in the wild, while males will expire shortly after reaching sexual maturity.

Bird-eating spiders have downward pointing hollow fangs, which are used to inject venom into their prey. Once the fluid enters the body of the victim, it begins to partially digest the animal, which enables the spider to consume its liquefied meal, by sucking the food through its mouth.

This species of tarantula is not a burrower like other “bird-eaters”, but instead prefers to spend most of its time out in the open. As a result, it is an extremely aggressive animal, and very quick to defend itself. Other than the spider wasp (whose paralyzing sting, the bird-eating spider is defenseless against), parasites, and parasitoids, this spider has no real enemies. If it is being pursued by a potential foe, the spider rubs its legs against its abdomen, kicking tiny, barbed hairs which become imbedded into the attacker and cause great irritation, being especially dangerous if they become lodged in the eyes. If this urticating defense does not deter an enemy, the spider will bite with no hesitation. The venom of the bird-eating spider is not especially harmful to humans; however the small hairs that cover the spider’s body can be an irritant, and cause painful swelling if they get imbedded in one’s skin.

During molting, the spider spins a patch of silk, which it uses to flip itself onto its back. After the molt is complete, which can take a number of days, the spider’s senses, including sight, hearing and touch, are suspended and the spider will remain motionless for several hours. This is because the newly exposed skin is very delicate, and it will take several days for the new exoskeleton to fully harden.

If the spider loses one of its legs, it is capable of re-growing the lost appendage, which begins as a small stump and then grows larger with each molting.

The bird-eating spider is quite common; however the destruction of the rainforests is affecting the animal’s numbers.