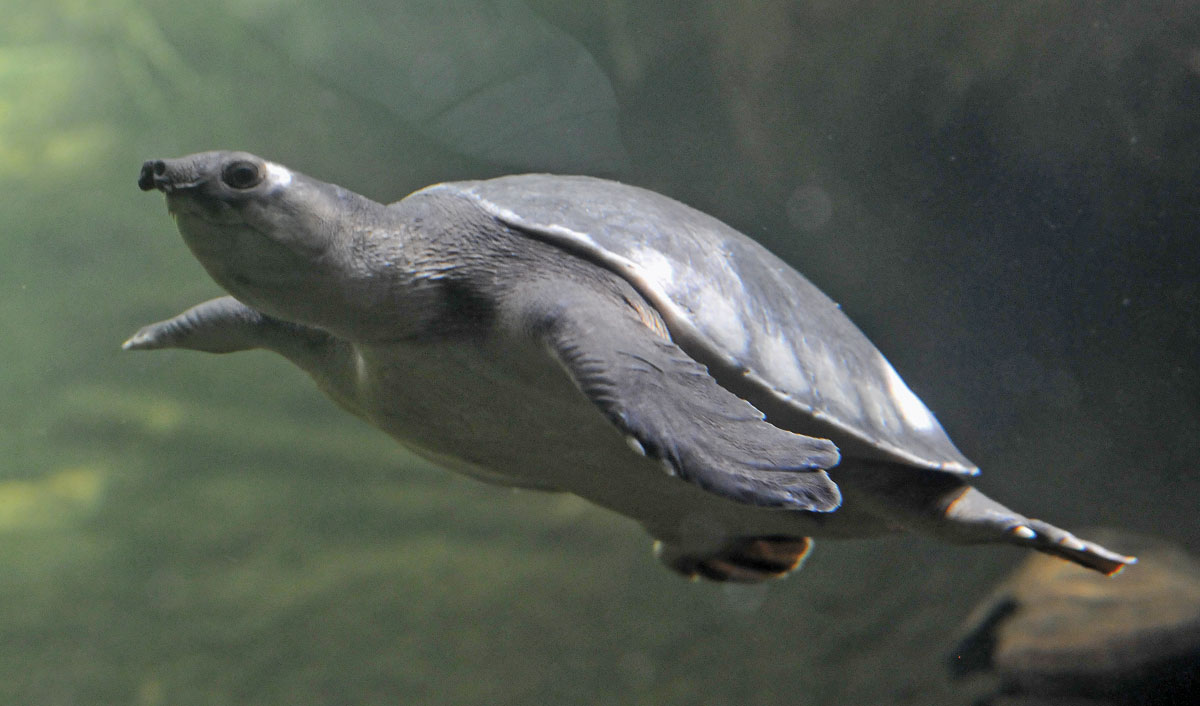 Fly River turtles or pig-nose turtles are aptly named because the olive grey head ends in a blunt snout with two wrinkly nostrils. There is a white stripe behind the eyes which fades with age. The chin has a black spot on it and the jaw is a cream colour as is the underside of the neck and the plastron. The pale to olive grey, well developed, bony, keeled carapace has no scutes but is covered by a leathery, pitted skin. Along the sides of the carapace are pale blotches which become less distinct with age. The fore limbs are flippers; the hind are webbed paddles; each limb has two claws. The top of the tail is covered with crescent shaped scales which diminish in size towards the tip; the male tail is longer and heavier with the cloaca midway along, whereas the female cloaca is at the base of the tail. The females tend to be larger with a more prominent keel.

They are found in the Fly, Moreheed, Lorenz and Strickland Rivers and Lake Jamur in Papua New Guinea, Irian Jaya province of Indonesia as well as on the Alligator, Daly and Victoria Rivers of northern Australia.

Highly aquatic, they prefer freshwater rivers, and billabongs with a soft bottom and a depth of one to three metres with dense forests of broadleaf trees along the shores. They are also found in lagoons, estuaries and the open sea, even brackish water at times.

These turtles are opportunistic omnivores but are mainly herbivores. They eat mainly fruit such as figs and bush apples which fall from the shoreline trees. They also eat flowers, leaves and seeds too. They consume algae and submerged plants as well as insects, molluscs, crustaceans, fish, and mammals. For example, in Australia the remains of flying foxes have been found in their stomachs but it is unknown if the bats were alive when ingested or which drowned after falling into the water from their roosts.

Males reach sexual maturity between 14 - 16 years of age whereas for the females it is 20 - 22 years. Since courtship and mating occur in the water, not a lot of information is known; however, more than 50% of adult females have injuries on their necks in one area (Daly River). These may be the result of bites from the male as he holds onto her neck or scratches from his claws as he holds onto the female’s carapace during mating.

Nesting occurs late in the dry season which would occur from September to January in New Guinea and from June to November in northern Australia. Before the nests are dug on sandy, coastal sea beaches, groups of females are seen in shallow water making individual forays onto the beach at night and even digging test nests. Eventually, all the females leave the water and begin to dig nests to a depth of 6 - 21cm using only their hind limbs. The nests are up to five metres from the shore. The clutch size is between seven and 39 eggs. In Australia, it has been noted that larger turtles lay larger and more numerous eggs. As well, very wet seasons are followed by larger and more numerous eggs being laid, probably because the females have better nutrition. Turtles in Australia have larger, and lay a greater number of eggs than those living in New Guinea. Eggs are white, spherical and brittle shelled.

Incubation takes about 102 days but after the yolk is absorbed (approximately 69 days) hatching can be delayed up to 50 days as they stop developing until the rainy season begins which results in the nest becoming flooded. With the oxygen level greatly reduced hatching is triggered. It is thought they make their way to the fresh water rivers by seeking water with less and less salinity. Since the turtles hatch at the same time, there is safety in numbers. The sex of the turtles is determined by the heat of the nest with females being produced at higher temperatures. The hatchlings are a lighter colour than the adults, about 57mm long with a serrated carapace border which disappears after a month. Their carapace has a high keel from the folded position in the egg. This diminishes over the first year.

After the hatchlings reach the water, they do not leave this aquatic habitat except to lay eggs. The elongated snout with its protruding nostrils allows them to inhale air without being exposed. The plastron bones which are not fused enable more efficient respiration. As well, there are papillae lining the throat which can absorb oxygen when these turtles are swimming underwater. The counter shading colours if viewed from below appear white like the clouds and from above seem grey or olive like the reflection of the trees lining the rivers. The flipper shaped forelimbs, which they use in unison, ensure they have powerful forward locomotion. The hind limbs, with wide webbed surface along with the flap of skin that goes from the hind limbs to the tail, acts as a steering rudder which speeds their escape from predators like crocodiles. They can also use the front limbs individually which aids steering too. They also hide in mud, loose gravel and under submerged branches.

They have very strong jaws with massive muscle attachments at the back of the skull. This adaptation helps with defense and enables the eating of an omnivorous diet which includes crustaceans. The claws on the forelimbs are used for tearing food apart as well as for holding onto the carapace of females.

The omnivorous diet is an adaptation to drastic shifts in amount and kinds of food available. These turtles are known to congregate under overhanging branches which drop fruit and nuts. The prominent nose is also a sense organ which can detect food sources, even in muddy water. Since they are found in coastal waters, they are adapted because of their size to tolerating a salty environment. They also use thermal springs in river beds to warm themselves. This behaviour intensifies during colder weather, and is especially true of gravid females.

Since the introduction of water buffalo to northern Australia, nesting sites are being trampled and the water vegetation that turtles eat, especially in the dry season, is being eaten by the water buffalo. Habitat degradation is also affecting water quality as a result of logging and mining.