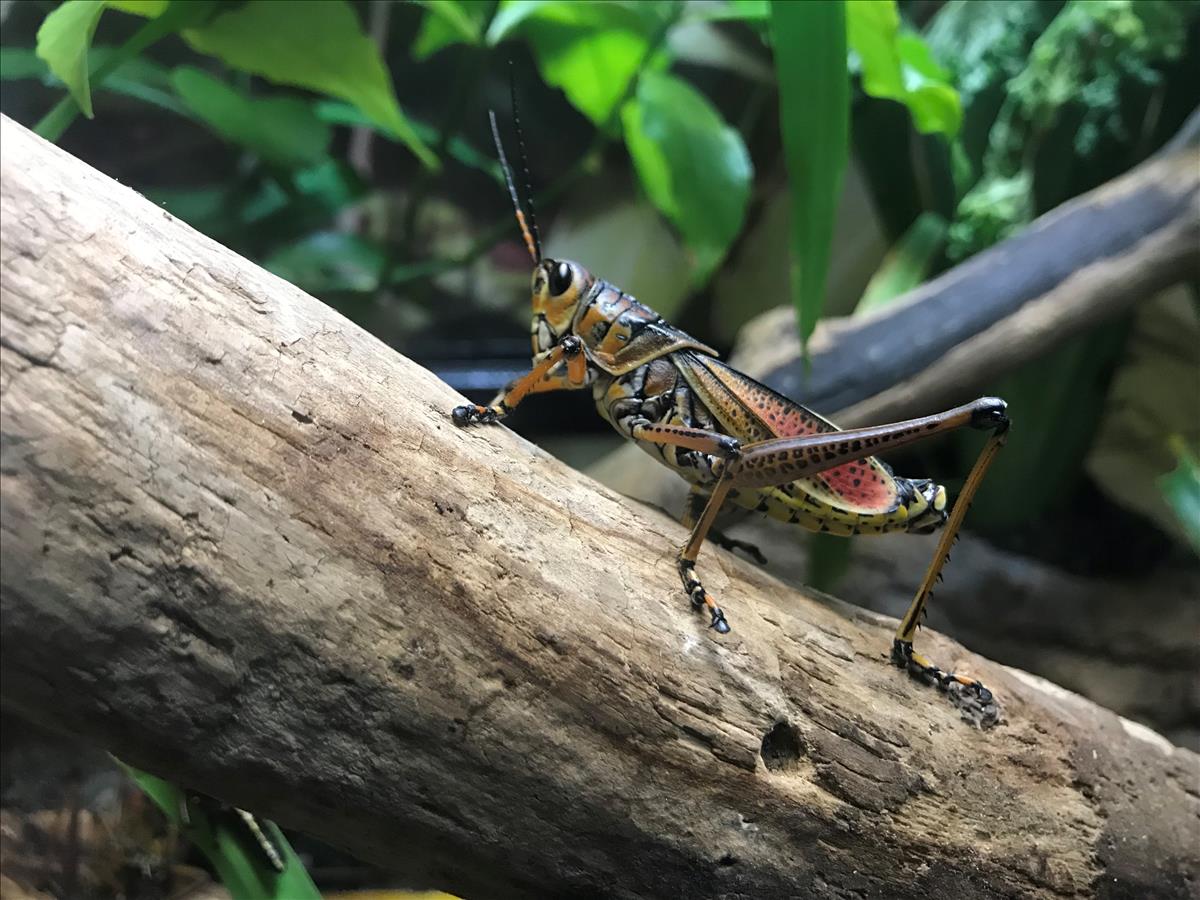 These are large, gregarious grasshoppers. Adult females measuring five to eight cm are larger than males, which are between four to six cm in length. They are robust in body and have a variety of colour phases, being lighter in colour in the more southern parts of their distribution range. Their bodies range from yellow to red. They have two sets of short wings, the forewings being yellow with black dots and the rear wings red or rose with a black border. Their legs are slender and yellow in colour. Lubber nymphs are completely different in colour than the adults. The nymph (immature) is black with yellow stripes and the front legs and sides of its head are red. Lubbers have short simple antennae and chewing mouth parts. Their auditory organs are found at the base of the abdomen. Males produce sounds with their wings, unlike other grasshoppers. Females have short, stout ovipositors with which they dig holes in the soil to deposit their eggs.

Southeastern United States from North Carolina to Texas, including all of Florida. They are found in all seasons, but are less common in winter.

Herbs and shrubs, weeds, sedges, vegetation and crops. Note: Lubbers require less food than other grasshoppers one third of their size.

Lubbers in the wild reproduce one generation per year. In the summer, the female deposits about 50 eggs in frothy foam into a hole she has dug about five cm deep into the soil with the tip of her abdomen. Each female lays one to three masses of eggs. The eggs over-winter in the soil and hatch in early spring. There are no larval or pupal stages. Each juvenile goes through five instar stages, each stage lasting about 20 days. At the end of each stage, the juvenile moults, and at each succeeding stage the insect grows larger. The end product looks very much like the insect that hatched from the egg, only larger. Usually juvenile lubbers will stay together, close to a food source. Adult lubbers are flightless. Their wings are only about one half the length of their abdomen. Instead of flying, lubbers walk or crawl slowly and clumsily, jumping short distances.

Lubbers have aposematic colouration: their bright colours warn predators that they are not palatable. In the wild, if approached by a predator, the lubber will display its red rear wings, which are normally kept folded beneath the front wings. If the predator is not scared off by the colour warning and comes into contact with the lubber, the lubber will secrete a foam from its thorax that creates a chemical mist around the insect. A bad odour and a hissing noise accompany this chemical mist. If that does not deter the predator, the lubber regurgitates a toxin-rich liquid made from recently-eaten plant material that contains noxious chemicals. In this way, the insect recycles the noxious chemicals it ingests to protect itself from being ingested. This regurgitate is called "tobacco spit" and can stain clothing.
Note. The loggerhead shrike is one bird that has learned to eat the lubber. It impales the grasshopper and lets it sit for a few days. The toxins dissipate leaving the grasshopper edible.

Loss of habitat from drainage of wetlands and beach side development. Pesticides are used to control populations. In crop lands and gardens these are considered to be pests and are killed.