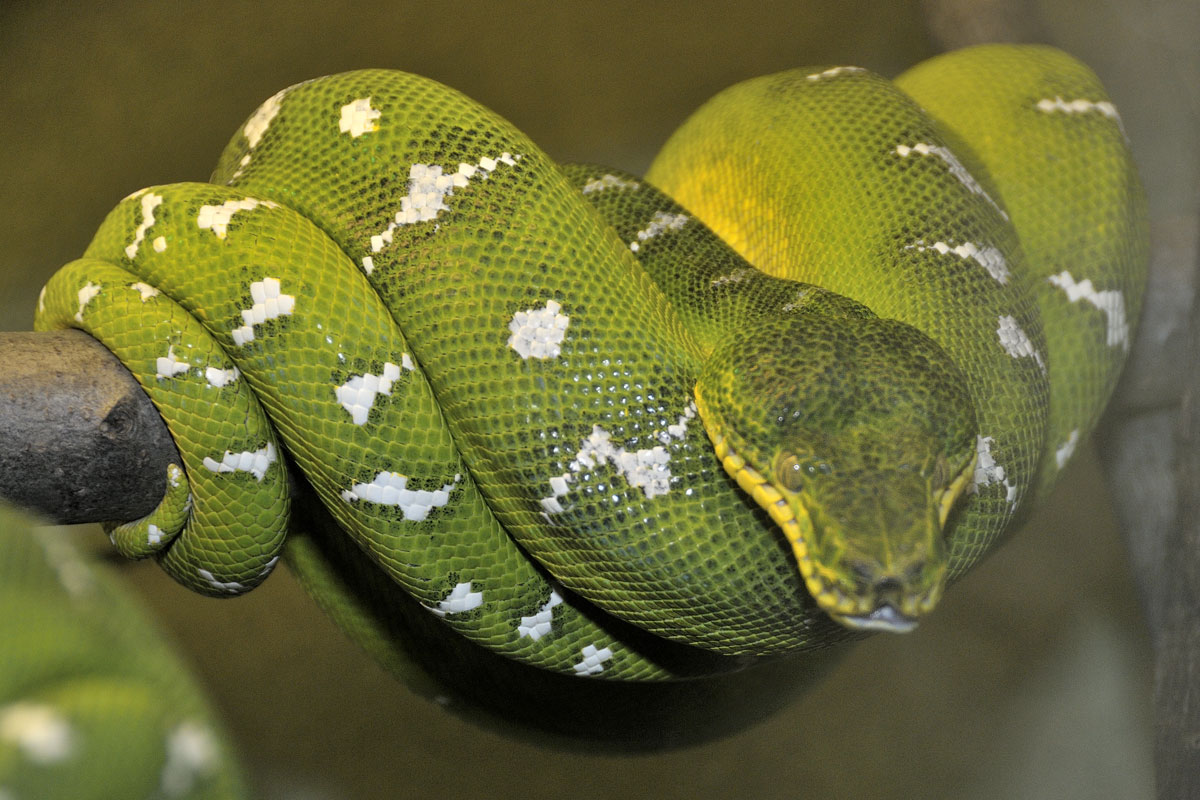 There is much variation in colour and pattern in the emerald tree boa, particularly in juveniles, according to their region. Newborns may be red or orange or a mix of red and orange or red, orange, and green. The adult specimen is a striking green with white blotches along the dorsal midline. The emerald tree boa is characterized by large, distinctive labial heat receptors. These infrared heat receptors are located in the labial scales. These heat pits run along both the upper and lower lips. The head is large and obviously separate from the neck. The average adult length is 1.8 meters but again there are variations according to region. The body is typically five cm in diameter.

Found in mature forested areas. They are found from sea level to altitudes of 800 meters.

This boa's diet consists mostly of small mammals, such as rats, bats, and possums, but also includes birds and lizards.

Emerald boas are ovoviviparous (live birth). They have up to twenty young at a time, who are born up to 30 cm long. Young emerald tree boas begin to turn green after 10 to 12 months. These snakes take one or two years longer to reach sexual maturity than other boids.

This is an arboreal and nocturnal species. Days are spent coiled in a tree branch with its head at the centre of the coil. At night this position is adjusted by extending the head downward in preparation for a strike. It holds this position waiting and watching for prey to approach from below or birds to alight nearby. As ambush predators their well-developed labial heat receptors allow them to see any heat emitting from approaching animals. Prey is grasped with the long frontal teeth, pulled in and constricted to asphyxiation.
Emeralds have the smallest angle of maxillary teeth to the maxilla bone than any other boid. This means the teeth are pointed more sharply backward. After striking their prey they have an extra advantage in that the teeth will be more deeply embedded as the animal tries to pull free, lessening the chance of escape. The tail is prehensile, giving a secure hold on the branch after they strike their prey.

The neonatal emerald colour variations may be mimicking the multi-coloured vipers of the same regions. After the juvenile takes on the mature colouration, it then depends on camouflage as a defense.