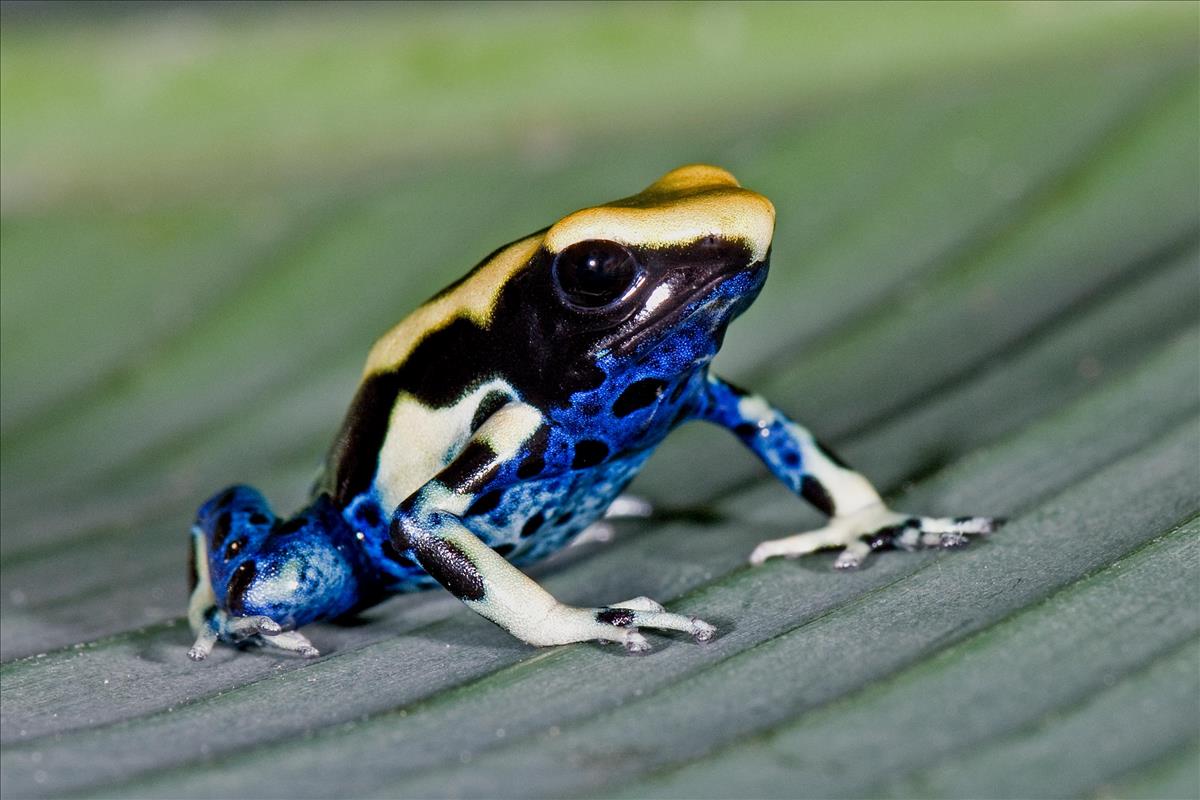 This is a large poison dart frog, commonly 40 to 50 mm with some females reaching 60 mm. It is a bright blue with two broad yellow stripes on its back; these stripes are connected by cross bands to produce two to three oval blue islands down the middle of the back. The arms and legs are black or deep blue with many bright yellow or black spots. Sometimes the yellow is replaced with white or the two yellow stripes fuse across the back to produce a frog with a solid yellow back on a bright blue or black background. It has a typical erect posture and a distinct tympanum about half the diameter of the eye. In theory males can be distinguished from females by having larger finger discs that are cut straighter across the tips. Additionally, only males call.

Dendrobates tinctorius are creatures of humid, usually wet habitats, and their skins are not waxy enough to prevent evaporation in dry air. Often, it is found in heavy vines one to two metres above the ground where its bright yellow stripes stand out in the darkness of the forest.

The diet consists mainly of ants, termites, and other small insects and small spiders. Ants have high quantities of toxic compounds in their tissue. Upon consuming ants, frogs are provided with the precursors to skin toxins which become formed in the frog’s skin, thus making them unpalatable to predators. When the food source does not have these toxic compounds, the frog will lose this poisonous feature.

Amplexus occurs always on land with this frog, never in water. Eight to ten eggs are laid and the male sheds the sperm directly over the eggs. When the tadpoles develop in the eggs the male will carry them on his back to water. Dozens of tadpoles may be placed in one large water hole by several males. Tadpoles reach transformation size in about ten weeks and feed on almost anything.

It is thought that the bright colours are warnings to other animals of their skin toxins and that they are not fit to eat (aposematic). The poison allows them to be diurnal unlike most other frogs that are nocturnal.

Frogs are isolated because of the unusual nature of forests in Guianas, with relatively dry savannahs and high mountain plateaus; no two populations of D. tinctorius are exactly alike. One or two cases of over collecting could wipe out a separated population. Logging and loss of forests destroys or fragments habitats.