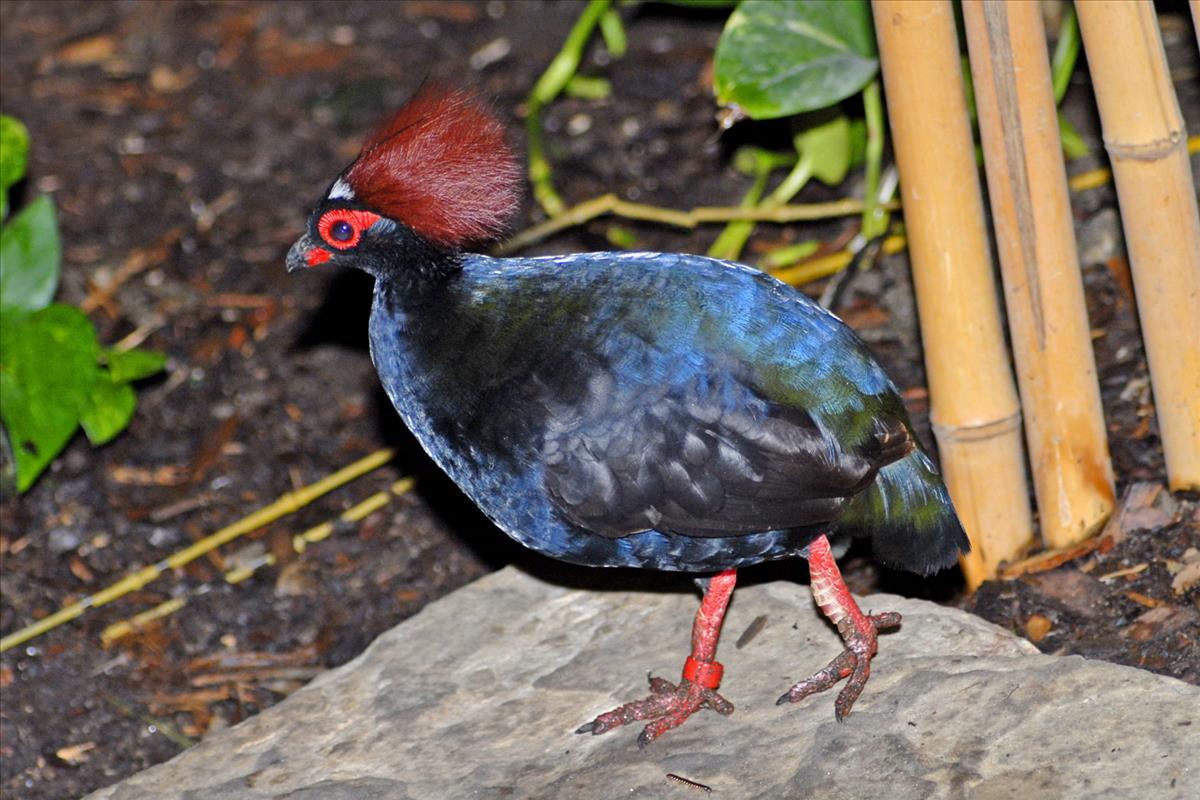 The crested wood partridge is a dimorphic species (males and females differ in appearance). It is a rotund, short-tailed bird; both sexes having a scarlet patch of bare skin around the eyes and red legs without a spur or hind toe. The male is metallic green on top with glossy dark blue under-parts and a brownish wing panel. The male’s head is adorned with a tall red crest (a display feature used during mating season), a white forehead spot, and black frontal bristles. The female has pea green body plumage with brown wing coverts. The head is slate grey with the bristles but no spot or crest. The bill is dark coloured. Juveniles are duller versions of the adults of the same sex.

This small partridge is a resident breeder in lowland rainforests in southern Myanmar, South Thailand, Malaysia, Sumatra, and Borneo.

They prefer tropical forests, mainly in plains and foothills but, in places, up to 1200 m. elevation. They live and nest on the forest floor and can be found living in pairs or, at times, in groups of up to 15 birds.

Breeding depends very much on the territory and the seasonal conditions where the birds live. This can be anywhere from January to December. The nest is a ground scrape lined with leaves, concealed under a heap of leaf litter. There are five or six white eggs, which are incubated by the female for 18 days. This species is known to build a “bower” if materials are available.

Unlike most precocial birds (ones that are mature and able to feed themselves almost from the moment they hatch) these altricial chicks remain in the nest for about one week and are fed bill-to-bill by the parents. Chicks of partridges and other birds of the order Galliformes (partridges, chickens, and quail) sometimes use their wings in an unusual fashion. As they cannot yet fly, they often flee predators by running while furiously flapping their wings. The flapping, once thought to be an instinctive but futile attempt to fly away, is now believed to provide a downwards acting force that actually provides them with greater traction. This allows them to run up slopes that are too steep for predators to follow. Gallinaceous birds “dust-bath” to clean their plumage. Clean feathers are needed so that birds can trap a layer of air which acts as insulation and helps to maintain their required body temperatures.

Some populations appear to be declining due to habitat destruction, especially in Indonesia.